COLDSPRING, Texas – Democrats are crying foul after a Texas county’s GOP chairman built a jail cell outside a polling location and locked the likeness of presidential candidate Hillary Clinton inside. A Donald Trump likeness stands proudly outside the cell with a “thumbs up” sign of approval.

San Jacinto County Republican Party Chairman Dwayne Wright built the satirical jail, located just a few feet outside the 100’ electioneering boundary, on Monday – before the latest revelation of the FBI’s re-opening of the Clinton email investigation. Wright led a successful revolution over the past few years to turn the historically blue East Texas county red.

“Some of the few remaining Democrats in our county cried foul and called in a Houston television station,” Wright told Breitbart Texas on Saturday. “The funny thing is, we have had many other people we know are Democrats come by and laugh and take their photos with the make-believe  jail.”

Wright show his own video of the Houston ABC affiliate’s news coverage.

“I think they’re trying to influence or depress the vote with this,” San Jacinto County Democrat Michaela Ellis told KTRK’s Steve Campion. “This is extreme.”

“Extreme?” Wright responded. “I call it political satire. Political satire has been around  for centuries. And besides, as the county’s GOP chair, isn’t it my job to try and influence voters?”

The jail mock-up is directly across the street from the entrance to the election administrator’s office where early voting has been underway since Monday. “We have had record numbers of people showing up to vote. Judging from the number of thumbs up we are seeing from voters and the number of people who go out of their way to come over and talk to us, we are winning in this county again.”

Wright live-streamed another video on Periscope showing voters reactions to the jail mockup.

One man came over, a local black man who identified himself as a Democrat, and laughed while taking a picture of the jail. “Y’all can come up with some funny stuff.”

Another voter, Julie Perrill, a woman from a part of Cleveland, Texas located in southern San Jacinto County, came over for a photo. As she was leaving she revealed her political position as she exclaimed, “May the best MAN win!” 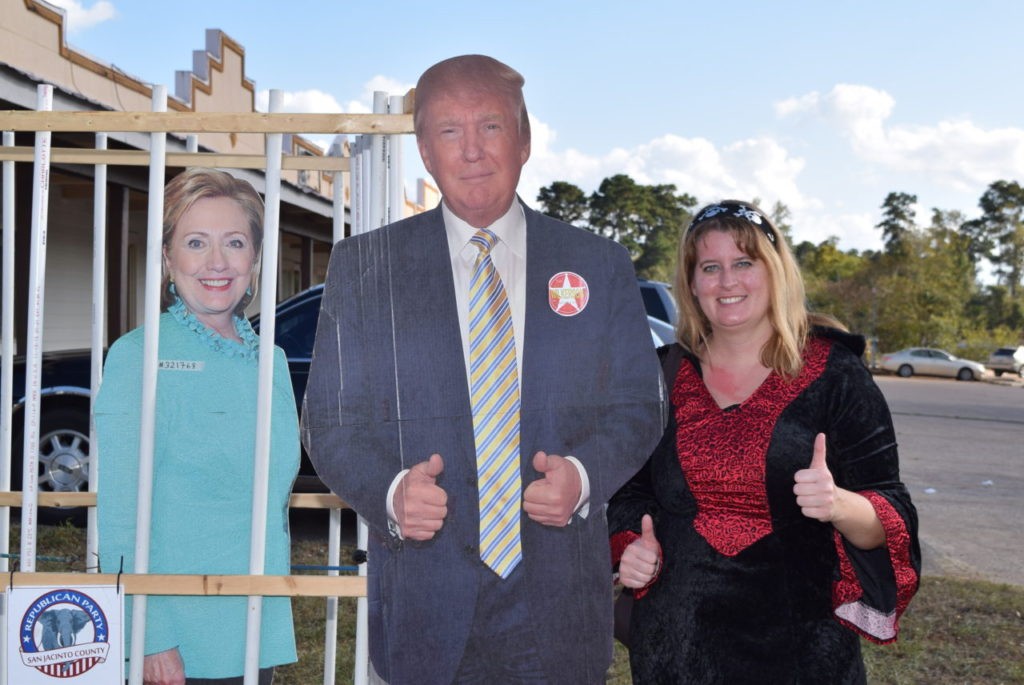 Wright said people have come as far as Flagstaff, Arizona, to stop by and visit the jail. “The response has been incredible. After the word got out on Twitter and Facebook, we have people driving in to see what we are doing.”

“This is really about free speech,” Wright explained in response to the offended Democrats. “You aren’t exercising your first amendment rights if you only make non-controversial statements.”

A local Hispanic couple came by and posed for a photo with Hillary and Trump. “Lock her up!” the woman said. She said she has been a Trump supporter for a long time. 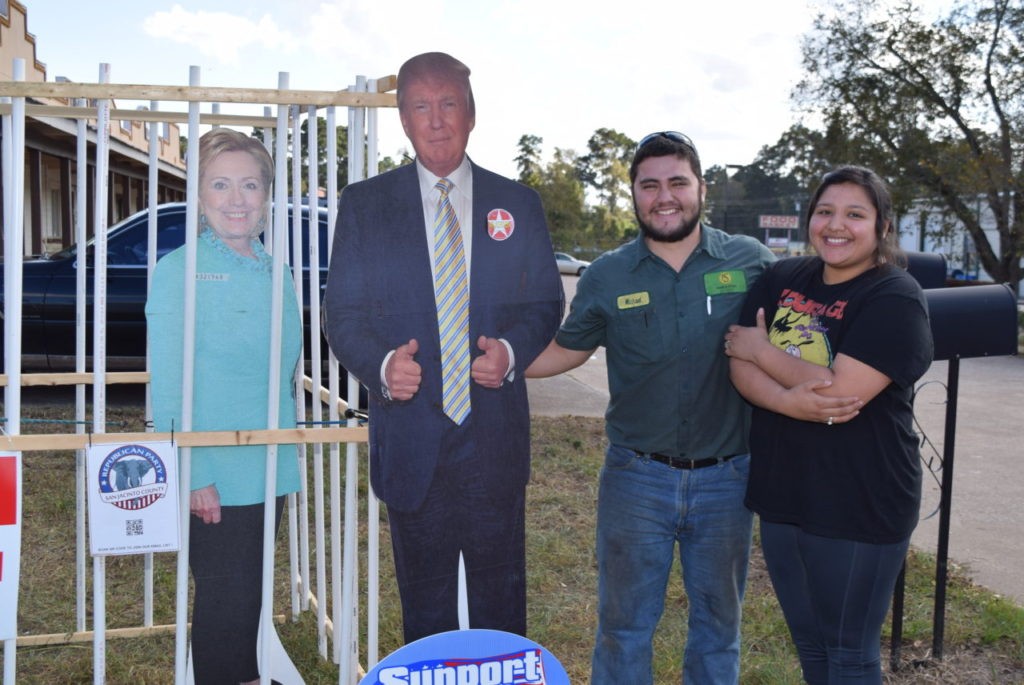 Wright received a photo of another jail cell that featured Hillary in lockup from a Republican activist in another state. “There is no copyright on this idea,” the GOP chairman said. “I hope people will replicate this idea all across the country. While the image is funny, the reality that people could elect a person who might really be headed to jail is very scary.” 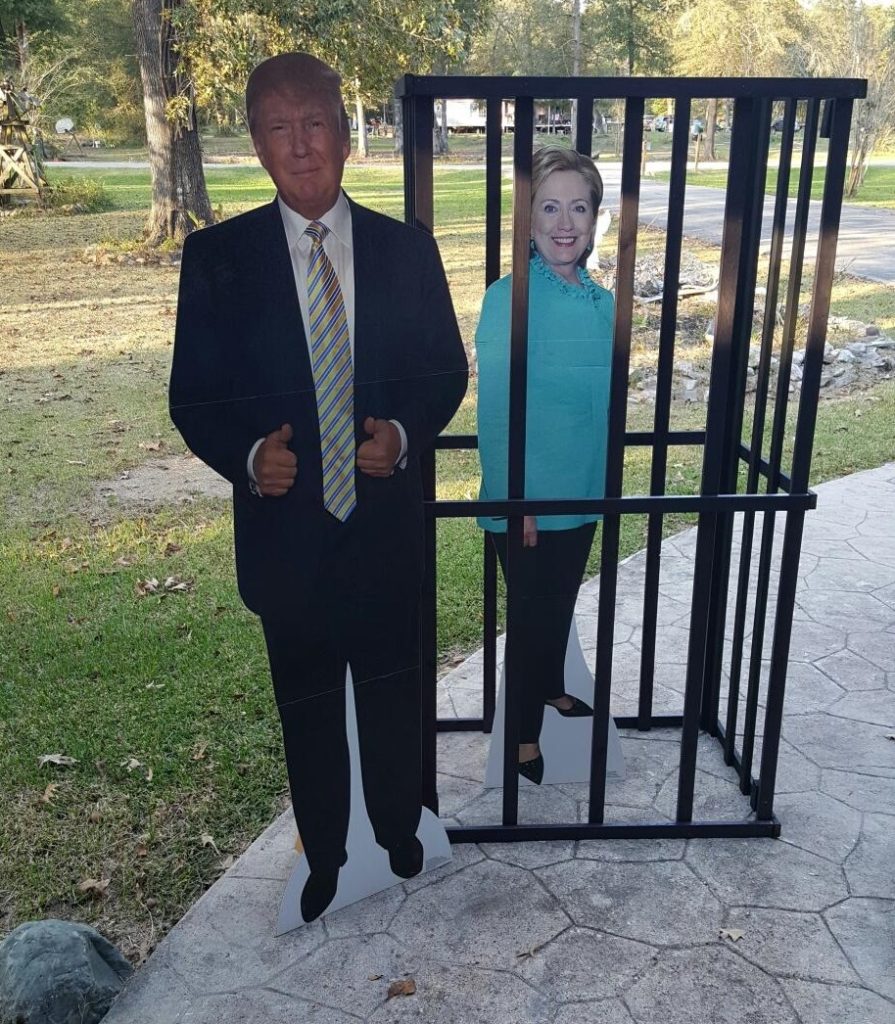 Since being elected as chairman of the county’s Republican Party in 2014, Wright has established a record of effective leadership. He has led the charge to not only removed Democrats from office via the polls in the historically blue county, but to also hold elected Republicans accountable for following party principles.

His team has now set its sights on replacing popular Democrat constable in Precinct 4 Alvin Wyatt with Republican Haney Wilkerson. The race drew the attention of the Republican Party of Texas and Toni Anne Dashiell, the Texas National Committeewoman to the Republican National Committee, visited the county in September to present a $1,500 campaign contribution to Wilkerson from the state party’s candidate resource committee.

“This race will be tight,” Wright conceded, “but if we can win this one, there is not a safe Democrat position left in the county.” 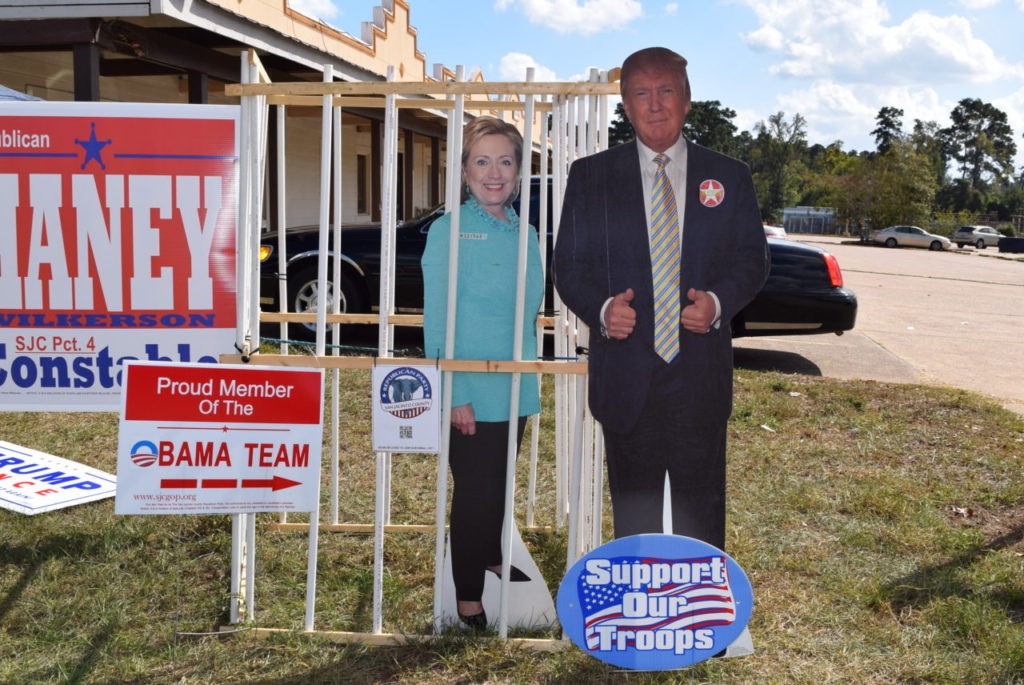 Wright said his jail cell, which features a Hillary Clinton cutout complete with an inmate number on her jacket, will remain in place throughout early voting and on Election Day. “The revelation by FBI Director James Comey on Friday shows just how realistic the possibility of Clinton being charged and convicted is.”