Representatives from the University of Texas Student Government have called for disbanding the Young Conservatives of Texas after the group hosted an “affirmative action bake sale” demonstration. Bake sale prices were based on student race, gender, and ethnicity.

The proposition, titled, “In Support of UT Disbanding the Young Conservatives of Texas from Campus for Its ‘Affirmative Action Bake Sale,” Efforts and ‘Catch an Illegal Immigrant’ Game Effort, and UT Meeting Future Incidents of Bias with Punitive Action,” has been attached below. They cite the October 26 demonstration bake sale, and the 2013 “Catch an Illegal Immigrant” game by the UT Austin chapter of the Young Conservatives of Texas (YCT-UT). The latter they say was a game “at which students would have to chase around other students wearing ‘illegal immigrant’ signs.”

The signers of the proposition cite other alleged incidents, including a February 2015 incident where the Phi Gamma Delta (Fiji) fraternity threw a “border patrol party” where guests wore hard hats with “Jefe” and “Pablo Sanchez” on them, and a 2012 Alpha Tau Omega fraternity effort to host a “FiesTau” party “that would have fake U.S. and Mexico sides with obstacles in between that guests would have to cross.” Also cited is a 2012 Daily Texan cartoon “that labeled Trayvon Martin, an unarmed black teen killed by police, as a ‘colored boy’,” they say. 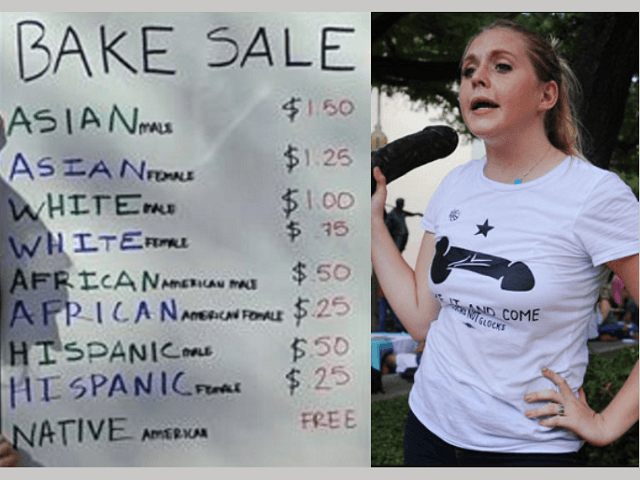 The signers complain that “Students at the University of Texas at Austin are continually subjected to incidents of bias for which there is little to no action taken by the university.” They add, “UT often claims that its failure to act is in order to protect freedom of speech, yet other universities both public and private do choose to act when similar incidents of bias occur.”

The chairman of the YCT-UT sent a letter to University of Texas President Gregory L. Fenves on Tuesday threatening legal action “if any punitive action is taken against the Young Conservatives of Texas chapter at the University of Texas at Austin (YCT-UT) or our members on account of their speech.”

UT chapter Chairman Vidal Castañeda writes, “The university would never consider barring a feminist group from holding a “Gender Pay Gap Bake Sale” on campus even though it would be a nearly identical event to the YCT-UT bake sale (although with a politically correct, left-wing message) that has been held on other campuses across the nation.” He also counters, “When students conducted an anti-2nd Amendment demonstration and openly taunted the university by brandishing sex toys in violation of Penal Code Chapter 43.23(f), the university took no action. Yet when YCT-UT conducts conservative demonstrations, administration officials openly condemn our speech and encourage angry and violent mobs to attempt to interfere with our events.”

The bake sale ruffled some feathers, resulting in calls for a policy against “hate speech.”

The University of Texas Student Government had a first reading of the proposal to remove the YCT on Tuesday, according to the Austin ABC affiliate.

UT chapter Chairman Vidal Castañeda told President Fenves in the letter, “YCT-UT is a diverse group of Longhorns that is welcoming to all students regardless of race, ethnicity or any other immutable characteristics.” He notes that of the five previous chairmen there have been three women, two Hispanics, and one Asian American – “all remarkably without affirmative action policies or quotas giving one student an advantage at the expense of another,” he writes. He says that “University employees have attacked YCT-UT, calling it a ‘racist’ organization because we speak out against policies that distinguish amongst students on the basis of race.”

Castañeda quotes University Code 13-204 (b)(2) which he says explicitly protects such speech, stating: “To make an argument for or against the substance of any political, religious, philosophical, ideological, or academic idea is not verbal harassment, even if some listeners are offended by the argument or idea.”

Castañeda warns that they “will take legal action against the University and all persons involved for deprivation of civil rights.” He urges that the First Amendment protects “more than just speech that is politically correct.”

UT Student Body President Kevin Helgren told KVUE in Austin, “I am a champion of affirmative action and I truly do believe that policy in this day and age is necessary to recruit a diverse and talented student body.” However, he added, “I don’t think that removing Young Conservatives of Texas is the best approach to take.”