HOUSTON, Texas – Local media outlets appear to have gone out of their way to ignore the immigration status of an illegal alien convicted this week of killing a local pastor and his wife.

Four Houston area media outlets reported about the conviction and sentencing of Alexis De La Rosa Sosa in a state district court on Tuesday appear to have completely ignored previous reports that the killer is an illegal alien from Mexico. Breitbart Texas reported De La Rosa’s immigration status in April 2016, shortly after his arrest in the drag racing hit-and-run crash that left the couple dying on the side of the road. Breitbart Texas confirmed this status with the Harris County Sheriff’s Office, court records, and Immigration and Customs Enforcement (ICE).

The headline from the Houston Chronicle reads, “Houston man gets 12 years in street-racing crash that killed Baptist minister, wife.” The article does not mention anywhere that De La Rosa Sosa is a foreign national from Mexico or that ICE placed an immigration detainer on him shortly after his arrest. 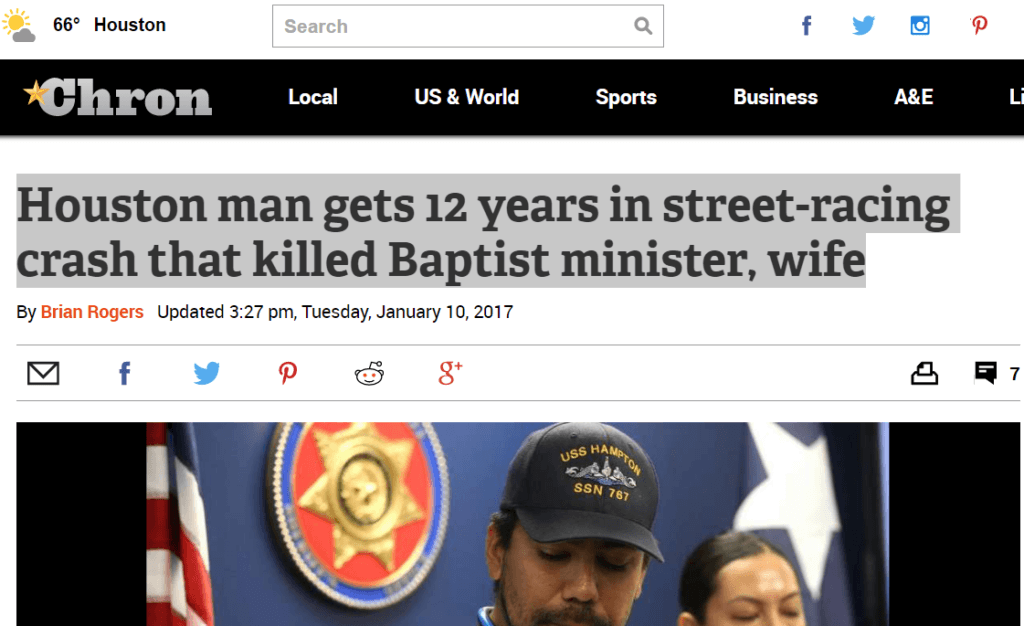 KHOU CBS11 was even more vague about the issue and simply referred to the convicted killer as “a man.” The local CBS affiliate wrote, “A man will spend time in prison for the deaths of a Houston pastor and his wife.” Again, the news outlet made no mention of his nationality or immigration status. 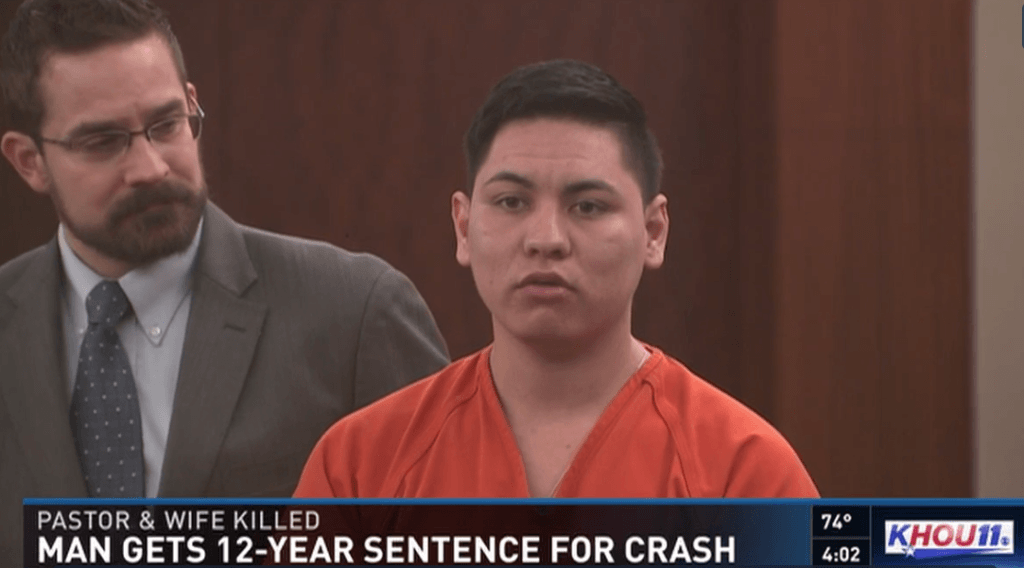 KTRK also took the generic descriptor of “man” in their story’s headline. “MAN GETS 48-YEAR SENTENCE IN HIT AND RUN THAT KILLED MINISTER AND WIFE,” the local ABC affiliate reported. 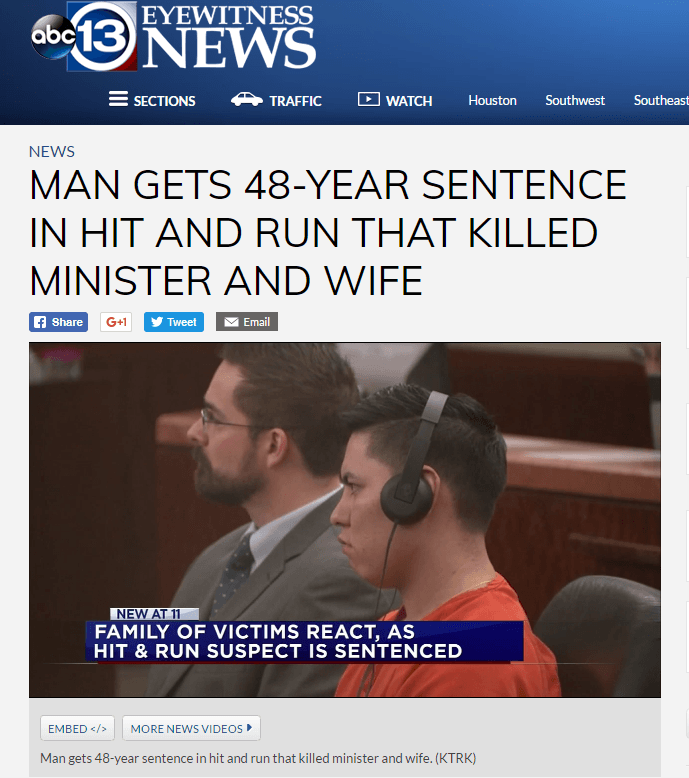 KPRC NBC2 followed suit in simply referring to De La Rosa Sosa as a “man.” The headline reads, “Man gets 12 years in prison for street-racing crash that killed pastor, wife.” 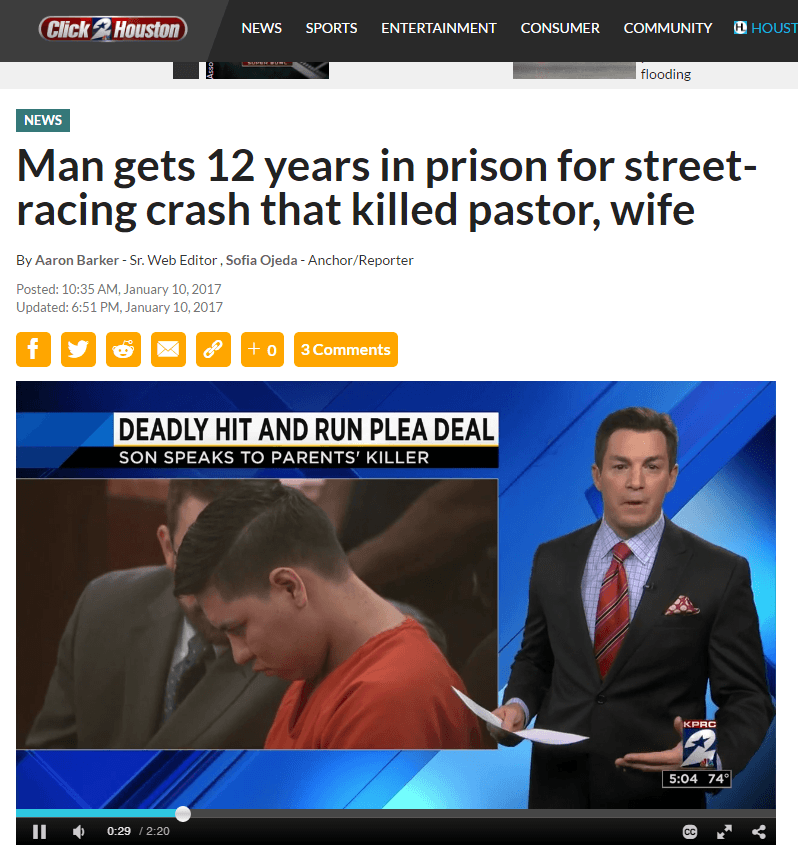 The four news outlets did not mention his immigration status in either their video reports or on their respective websites.

While all four local media outlets that provided coverage of the conviction reported on the sentencing of De La Rosa Sosa to four, 12-year prison sentences, set to run concurrently, none of them reported that he will likely face deportation following his prison term.

In April 2016, Breitbart Texas confirmed De La Rosa Sosa’s status as an illegal alien with Harris County Sheriff’s Office Spokesman Ryan Sullivan. During a phone interview about the case, Sullivan said, “His intake form says: U.S. citizen, no; Alien Status, illegal.” An immigration detainer was immediately issued by Immigration and Customs Enforcement officials and is reflected in the District Clerk’s records available online. No local outlets reported this information at the time of his arrest.

De La Rosa Sosa fled the scene following the crash and remained at-large for three days before turning himself in.