When 106 student delegates from 22 Texas universities convened for the annual Texas Federation of College Republicans state board elections last weekend, the results reflected the most diverse collection of conservatives anywhere in the nation, says its newly elected chairman.

“We elected the most diverse College Republicans board in the nation,” said Colton Duncan, chairman of the state’s collegiate arm of the Texas Republican Party. He spoke exclusively to Breitbart Texas about the millennial face and future of the state’s GOP following his election and that of the three other officers: Marivious “Marv” Allen, Shalom Soman, and Shawn Bhatia.

“The left has, through academia and pop culture, convinced people that conservatives can only be fussy white men when, in reality, a love of liberty and the ability to see capitalism as the greatest force for good in human history has no demographic bias,” said Duncan, who is white. “Conservatives have been painted with a broad brush, but my generation has constantly challenged the stereotypes pushed by the left.” 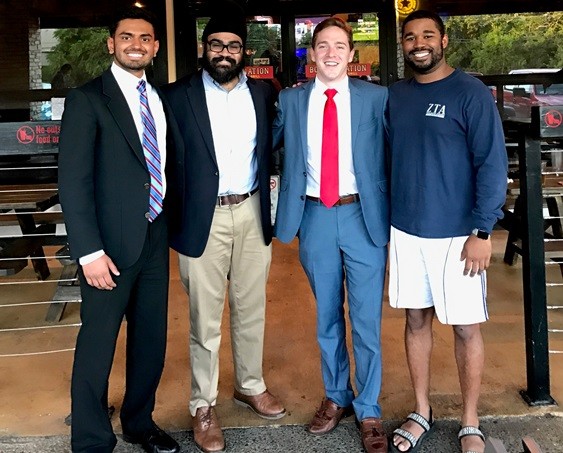 In addition to chairing the Texas Federation of College Republicans board, Duncan was sworn in as Texas State University student government vice president this week. He works and studies at the Texas Capitol as a Texas Conservative Coalition Research Institute (TCCRI) Clements Legislative Scholar and served as past executive director for the state’s Federation of College Republicans.

Duncan predicts this generation will construct a GOP comprised of all religious, ethnic, racial, and socioeconomic backgrounds led by intellectual and philosophical diversity. He noted, “This board consists of a centrist, a populist, a nationalist, and a classical liberal. That is the diversity we should all celebrate.”

He also pointed out that “campus culture is notorious for limiting debate and rejecting ideological diversity,” quipping, “for being the party of old white men, as the mainstream media likes to portray us, it’s incredible to see the diversity of leadership the next generation of Republicans elected here in the great state of Texas.”

In a prepared statement, newly installed Federation College Republican Vice Chairman Marivious Allen called being a minority in the Republican party “a unique privilege to emphasize how conservatism can be beneficial to fellow minorities in their daily life.”

A Baylor University political science major, Allen is black. In 2016, he organized the grassroots movement for Dr. Ben Carson’s presidential bid. After Carson had dropped out of the race, Allen supported Trump and served as southwest U.S. regional director for Students for Trump.

“We break the social norms because we want tangible change that improves our communities,” said Allen, also the co-chairman for Baylor’s College Republicans chapter.

University of Texas at Austin business major Shalom Soman, an Indian-American, won his race for state secretary. He underscored: “There are few people who best represent Texas’ changing demographics and are ambitious about strengthening the Republican Party’s values of individual liberty, personal responsibility, and fiscal prudence.”

A past Republican Leadership Institute volunteer field organizer with Texans for Greg Abbott, Soman serves as administrative director of the College Republicans at Texas, the oldest political organization at UT-Austin. Soman also serves as editor-in-chief for The Millennial Post, a conservative, collegiate social media news source building a bridge “from an untrusted industry to a misinformed generation.”

“I am proud to work with a qualified and diverse team that fights on the frontlines for the principles of limited government and free market enterprise on our college campuses – our country’s future,” said Shawn Bhatia, a Sikh Indian-American and University of Houston finance major. He won his race for state treasurer. Bhatia has interned with the Charles Koch Institute, The Leadership Institute, and U.S. Congressman Ted Poe (R-TX), and the Sikh American Legal Defense and Education Fund.

In speaking to Breitbart Texas, Duncan also acknowledged the four GOP student contenders who lost. He said they ran impressive campaigns. Trinity University student Jonah Wendt lost to Duncan and Abilene Christian University student Nick Cartwright vied for secretary. The remaining two were women: Noa Farou, a University of Texas neuroscience major, lost to Bhatia, and Aggie Tatum Garvin sought the state vice chair position won by Allen. Duncan noted, “they will all be brought onto the state board to head director positions in the spirit of unity and reconciliation.”