A new report released shortly after the forming of the Presidential Advisory Commission on Election Integrity finds that more than 5,000 individuals were determined to be non-U.S. citizens registered to vote in Virginia.

Dubbed a “sequel” to a similar 2016 effort, the latest study found 5,556 voters were “quietly removed” from the records for reasons related to non-citizenship “between 2011 and May 2017,” according to an advanced look at the findings provided by the Public Interest Legal Foundation (PILF). Of the total registered, one-third of unlawful voters managed to cast ballots—leading to a total of more than 7,400 illegal votes cast, according to the report.

The organization points out that it was unable to find any evidence that illegal registrations or votes were ever prosecuted.

The report details how ineligible individuals are slowly discovered by local officials—most often, the authors allege, by accident. Applicants for voter registration are not required to prove they are actual U.S. citizens in Virginia. The vast majority of states only require that people claim to be citizens during registration, PILF notes. The report details, however, that Virginia shares information when a claimed citizen indicates otherwise to a separate state agency. At that point, removal procedures begin:

In the absence of regular data-sharing arrangements between federal officials and the Commonwealth, the ability of election officials to identify aliens on the voter rolls is almost nonexistent. The most that happens in Virginia is that an alien on the voter rolls will sometimes tell the state DMV they are not a citizen. Without those leads, counties and municipalities must accept false claims of citizenship on their face.

The authors also shared with this reporter examples of how some ineligible noncitizens admitted their immigration statuses at the outset, but were still registered to vote. Some illegal registrants lasted on the rolls for years–risking possible deportation–until they were discovered. 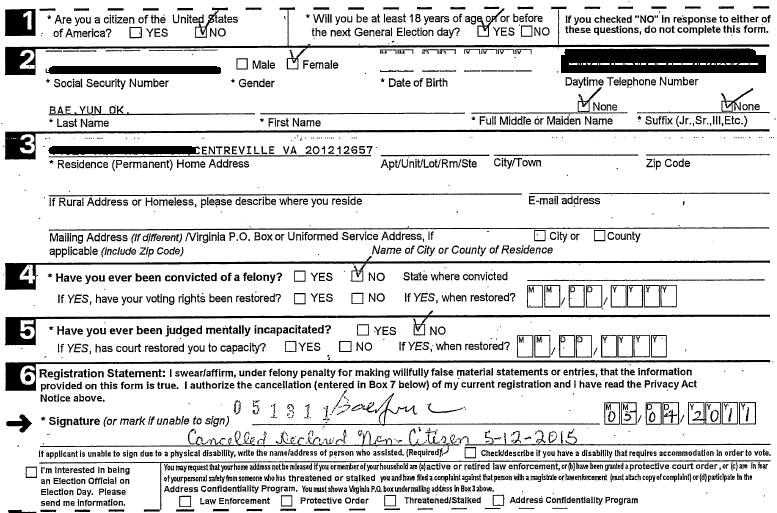 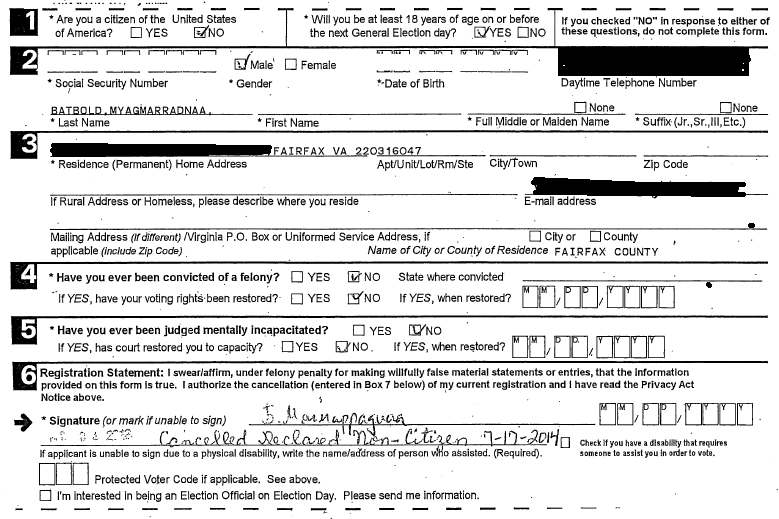 In order to obtain the information necessary to perform the study, the Public Interest Legal Foundation filed a total of three lawsuits across the commonwealth in 2016. The group claims that political interference from officials loyal to Governor Terry McAuliffe (D) initially stalled the research effort.

“At the instruction of Governor McAuliffe’s political appointees, local election officials spent countless resources to prevent this information from spilling into the open,” J. Christian Adams, a former Department of Justice attorney and President of the Public Interest Legal Foundation said in a statement. “Virginia hid critical information that would have improved election integrity while a political operative-turned-governor vetoed numerous proposals that would’ve prevented alien registration and voting.”

A release notes that local clerks were advised to reject PILF’s requests for information, citing the federal Drivers Privacy Protection Act as a justification to prevent full disclosure, since some noncitizens outed themselves when receiving driver’s licenses. That effort reportedly failed when the organization sued some northern and central Virginia officials.

The “alien voting” report arrives at an interesting time. In addition the presidential commission announced that plans to study similar problems around the country, Virginia is also due to hold statewide elections in November 2017.

The nonprofit law firm credits the Virginia Voters Alliance for assisting in the research effort locally.

The report adds that it is a felony on both state and federal levels for a non-citizen to vote and can carry with it an order of deportation.