Activists wasted no time in using Hurricane Harvey to tout their political agenda of climate change and global warming. Some even said those in the region deserved the storm because of their disbelief in the climate notion. Others jabbed at the president for his policies.

MiG and Nazi Killer Tweeted a video with the caption, “When you realize that Hurricane Harvey is mostly affecting Trump voters and people that don’t believe in climate change.”

When you realize that Hurricane Harvey is mostly affecting Trump voters and people that don’t believe in climate change pic.twitter.com/yn0rZBvcSb

YAY SPORTS @icecreamiscool_ noted, “I like how liberals are desperately making Harvey about race and climate change already.”

I like how liberals are desperately making Harvey about race and climate change already .

Dr. Michael Riccioli @curvedway, an English lecturer at the University of Paris-Dauphine,  Tweeted, “#Hurricane #Harvey: Can Mr Trump go on telling all and sundry that there is no such thing as climate change ,,, I wonder.” He also Tweeted:

Hurricane Harvey will be major disaster: Texas governor. – IS MR TRUMP AWARE OF THIS ? https://t.co/qtx4awTuly

@charleshogan54 Tweeted this video of the hurricane winds saying, “Apparently Hurricane Harvey isn’t aware of Republican views on climate change and is going to Hurricane anyway ….

More climate change and Harvey comments on GAB and Tweeter:

Dear Trump Supporters: Hurricane Harvey is real and dangerous, and so is climate change. It’s not fake just because you don’t like it. 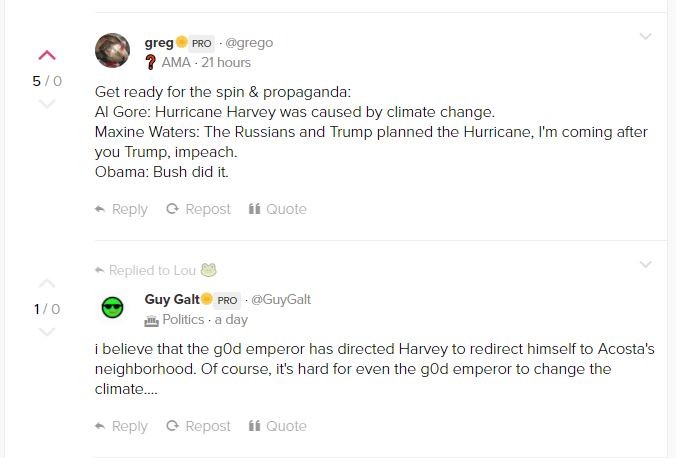 Henk van der Wilt @VDWILT on GAB posted, “Harvey  will be the first Texas hurricane since Ike in 2008, and will, of course, be blamed on ‘climate change.’ In 1886 4 hurricanes hit Texas with 2 being major!!”

Matt’s w/Trump @OneLastRun54 responded to the issue by Tweeting a cartoon and stated, “I’m sure if libtards had there way…#Harvey would be named #HurricaneMuhammad & it’s called weather not #climateChange.”

I’m sure if libtards had there way…#Harvey would be named #HurricaneMuhammad
& it’s called weather not #climateChange @godisgood1961 pic.twitter.com/b2egkhtPJM

The New York Times and the Washington Post used the tropical storm and Category 3-4 hurricane to ask if global warming and climate change is connected to the emergence of Harvey.

One novelist and copy writer Tweeted the New York Times article and took a hit at President Trump for his alleged denial of “the problem.”

As Trump denies the problem, #ClimateChange “exacerbates the natural risks and hazards that we already face” https://t.co/nZFRdDp3h1 #Harvey

The Washington Post concluded that Harvey is a strong summer hurricane but added, “But the climatic and sea level context is also shaping this storm, as is inevitably true for other hurricanes as well.”