Despite the intense summer heat, thousands of illegal alien minors and families risked their lives to illegally cross the U.S. border with Mexico in August.

U.S. Customs and Border Protection (CBP) officials reported this week that the apprehension of Family Unit Aliens (FMUA) and Unaccompanied Alien Children (UAC) rose by 37 and 20 percent respectively. These numbers represent the fourth straight month of dramatic increases for these two categories of illegal immigration.

The Rio Grande Valley Sector in South Texas continues to lead the nine sectors that make up the southwest U.S./Mexico border. Agents in this sector alone arrested 1,296 UACs in August (up from 1,194 in July). FMUA arrests increased from 2,098 in July to 2,815 in August (an increase of 34.18 percent increase).

After the inauguration of President Donald Trump in January, the apprehension of FMUAs fell from 9,300 in January to a low point of 1,118 in April. Since that time, the number of FMUA apprehensions rose by 315 percent to 4,645.

The apprehension of UACs fell from January’s 4,406 to 996 in April. Since that low point, the numbers steadily increased to 2,994, an increase of 201 percent. 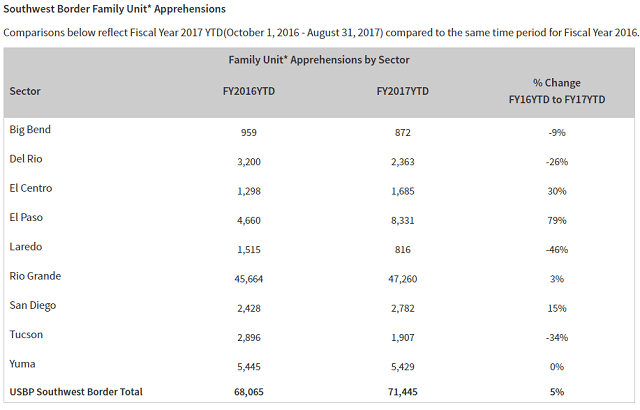 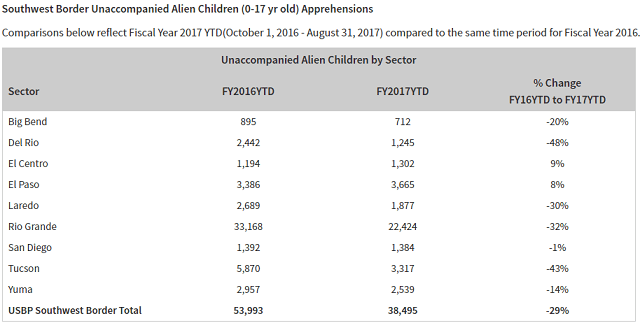 Editor’s Note: All charts in this article were obtained from U.S. Customs and Border Protection reports.