Quick responses from Laredo Sector Border Patrol rescue teams resulted in the saving of two lost migrants’ lives after their human smugglers abandoned them without water. The incidents occurred over a two-day period on ranches near Laredo and Hebbronville.

Laredo Station agents received a 911 call on Wednesday about a lost migrant in distress on a ranch outside the border town of Laredo. The agents quickly responded and teamed up with ranch workers to locate the migrant who had been abandoned by his human smuggler and left without water. A Border Patrol EMT quickly assessed the migrant’s condition. Once the migrant recovered, agents took him into custody, according to Laredo Sector Border Patrol officials.

“Although the outcome was positive in this instance, the rescue of this individual highlights the dangers that illegal aliens are often subjected to in their attempts to circumvent the law,” officials stated. “This individual would have perished without water had it not been for the quick response of the Laredo Sector Border Patrol.”

“It’s important for the public to know that our mission is much more complex than simply stopping criminal activity at the border,” Laredo Sector Division Chief Greg Burwell explained. “We have an unwavering dedication to the preservation of life and rescues like this one are representative of that dedication. We will do whatever it takes to save lives and prevent people from being subjected to dangerous, life-threatening conditions.”

Hebbronville Station agents received a similar about a lost migrant on Tuesday. 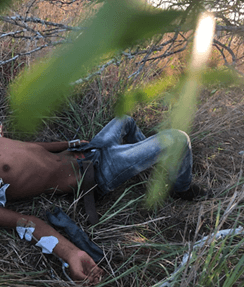 The agents quickly responded to the life-threatening situation and found the lost migrant on a ranch located on Highway 285. This is a location where smugglers frequently drop off migrants to attempt to circumvent the Falfurrias Border Patrol Checkpoint in Brooks County.

The agents provided life-saving emergency medical assistance to the migrant, an Ecuadorian national illegally present in the U.S. until Brooks County EMS crew arrived on scene. The ambulance transported the man to a local hospital for further treatment.

Once he returns to health, Border Patrol officials will process the Ecuadorian for immigration violations.

The Laredo Sector Border Patrol continues to warn migrants about the dangers of crossing illegally into the United States through dangerous environmental conditions. “Our Border Safety Initiative (BSI) is a humanitarian, bi-national strategy designed to reduce illegal alien deaths, educate and inform potential illegal aliens of the dangers and hazards of crossing the border illegally, and to respond to those who are in life-threatening situations,” Laredo Sector officials stated.