The statement follows a series of tweets from the actor where he called for people to dig up and release information about where ICE and CBP agents live and where their children go to school.

Fonda sent out a tweet that reads, “WE SHOULD HACK THIS SYSTEM, GET THE ADDRESSES OF THE ICE AGENTS CBP AGENTS AND SURROUND THEIR HOMES IN PROTEST. WE SHOULD FIND OUT WHAT SCHOOLS THEIR CHILDREN GO TO AND SURROUND THE SCHOOLS IN PROTEST. THESE AGENTS ARE DOING THIS CUZ THEY WANT TO DO IT. THEY LIKE DOING THIS. F**K.” It appears the tweet has been taken down but the Daily Mail and others posted this image of the tweet. 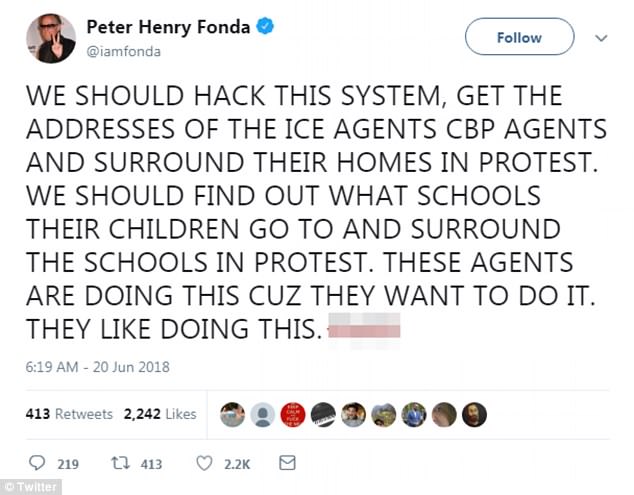 NBPC officials rightfully took exception to the alleged threat against them, fellow law enforcement agents and officers, and their families:

Law enforcement isn’t pleasant Peter, it isn’t a movie where you are constantly being catered to by sycophants and you’re pampered, protected and made to think you’re really someone better than the rest of us. You aren’t!” NBPC officials wrote, “For us, the bad guys and the constant danger are real. Ask the Tucson agent who was shot last week by illegal aliens, Peter. Yes Peter, the bullets were actually real. Do his traumatized children deserve to be terrorized at their schools because he’s a Border Patrol agent. What about his wife? Should she be hunted down and terrorized too? What about the children of agents who have been killed in the line of duty Peter? Should they be terrorized at school as well?

“Sounds great. We don’t have to take the agents kids, we only need to surround their schools and scare the shit out of them and worry the f**k out of the agents from CBE ICE & REGULAR BORDER PATROL AGENTS. WE NEED TO SCARE THE F**K OUT OF THEM! NEED TO MAKE THEIR CHILDREN WORRY NOW”

The article published on the NBPC website lists other tweets from Fonda’s latest rampage. Those include: 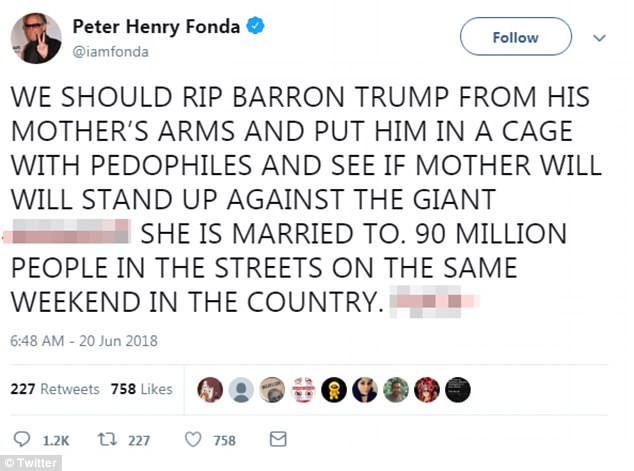 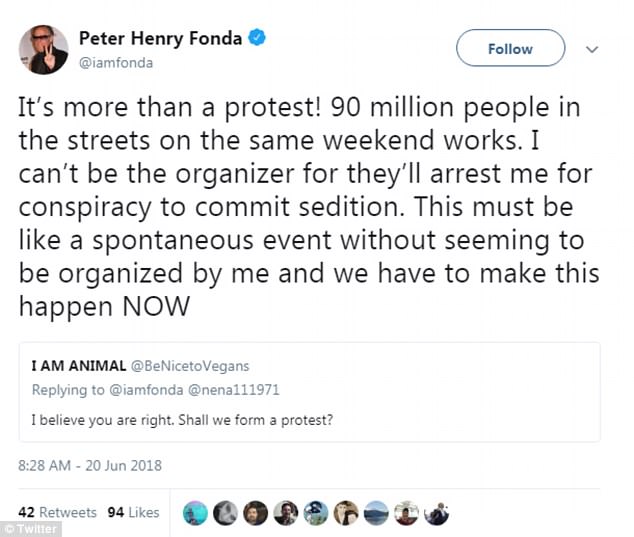 “Yes, this is what passes for ‘inclusion, acceptance, kindness, feminism, gender equality, love and peace’ in the world of so many liberals,” Border Patrol union leaders said. “Their hypocrisy knows no bounds. How about the ‘Be Kind’ stickers on cars and ‘Love Trumps Hate’ motto that are so popular in liberal circles? Do those apply here? And the really hilarious part about Fonda’s tweets encouraging domestic terrorism is his avatar on Twitter flashing a ‘peace’ sign.”

Peter Fonda and his sibling “Hanoi Jane” Fonda have been extremely wealthy since birth. They can afford armed guards, luxury, private schools and massive home security measures. Border Patrol agents cannot afford these things. We actually work for a living. This is the same Peter Fonda who advocates taking guns away from average Americans on one hand and then encourages domestic terrorism against average Americans on the other hand. Think about that for a minute. How wise were our Founding Fathers to include the 2nd Amendment in our founding documents?

Peter, you are a despicable, hateful, spoiled, and entitled punk. Your life of privilege since birth is not what most of us deal with. We have to work hard every day to make a living for our families. Some of us do dangerous jobs that most Americans wouldn’t touch. Our children have to put up with enough as it is. Demonizing us is low. But encouraging domestic terrorism against our children is unforgivable. Encouraging violence against the President’s son is unforgivable. Asking people to kidnap the DHS secretary, strip her naked, put her in a cage and letting people poke her with sticks demonstrates just how unhinged you really are.

Peter, seek some mental health treatment. You need it!