Border Patrol agents assigned to the Falfurrias checkpoint stopped a human smuggler from successfully using an emergency services vehicle to smuggle illegal immigrants into the U.S. interior. The driver fled from the checkpoint after a K-9 agent raised suspicions about the vehicle.

Agents assigned to the Falfurrias Border Patrol Checkpoint in Brooks County observed an emergency vehicle approaching for inspection about 80 miles north of the U.S.-Mexico Border. During the initial inspection, a K-9 agent alerted to the possible presence of humans or drugs in the back of the vehicle, according to Rio Grande Valley Sector officials. 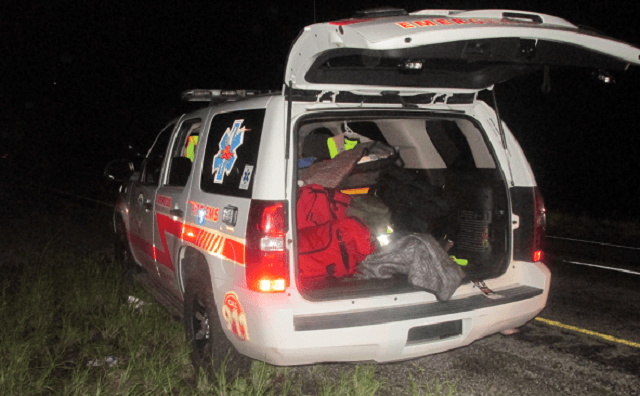 The agents referred the driver to a secondary inspection station so they could search the vehicle. However, the driver did not stop and fled from the scene. He led the agents on a short high-speed pursuit that ended when the vehicle stopped abruptly a short distance north of the checkpoint. At that time, the driver and several other people bailed out from the vehicle and attempted to flee on food. Agents quickly captured the driver, a U.S. citizen, and three Brazilian nationals who are in the U.S. without documentation.

Rio Grande Valley Sector officials told Breitbart Texas in a phone interview on Wednesday that the driver is being investigated for impersonating a firefighter. The spokesman for the sector said the vehicle is an actual Emergency Medical Services vehicle from a volunteer fire department. He said it has not been reported stolen and was being used improperly by the alleged human smuggler was is a volunteer with the department.

The case is being investigated for possible prosecution under federal immigration laws.

The three Brazilian nationals will be processed for removal and could face charges for immigration violations.

“This shows that smugglers will do whatever it takes to move their human cargo into the U.S.,” the official told Breitbart Texas. “The Brazilian nationals were placed in a dangerous situation by the smugglers who hid them under equipment in the cargo area of the SUV. If there had been an accident during the crash, they could have sustained serious injuries or been killed.”

Bob Price serves as associate editor and senior political news contributor for Breitbart Texas. He is a founding member of the Breitbart Texas team. Follow him on Twitter @BobPriceBBTX, and Facebook.