In an “Action Alert” released on May 7, the foundation wrote, “A concerned Coldspring resident reported to FFRF that San Jacinto County has the crosses up all year round and even lights the crosses during the holiday season.” The self-described “nonprophet nonprofit” urged supporters to “Tell San Jacinto commissioners to remove courthouse crosses.”

Instead, local residents filled the large parking lot to the shelter. They also filled adjacent parking lots in a strip center and a community building across and down the street from the shelter. Vehicles lined the roadway coming into the town, and there were 600 to 700 residents in a building designed to seat 500. 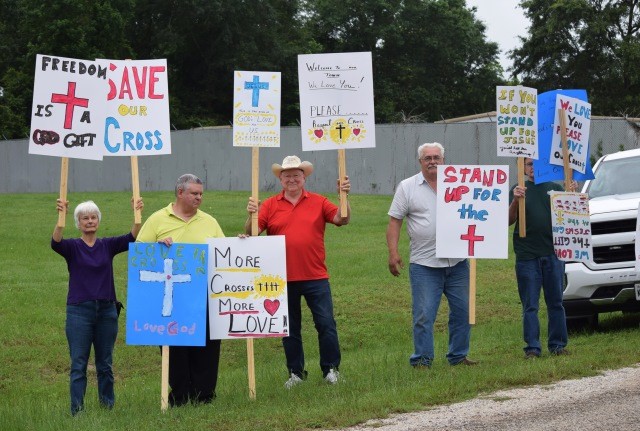 San Jacinto County residents stand in support of the county’s display of crosses on the courthouse. (Photo: Lana Shadwick/Breitbart News)

Approximately 45 San Jacinto County residents signed up to address county commissioners in support of the crosses. People displayed large crosses and some wore shirts bearing “All in For Jesus” and other religious expressions. 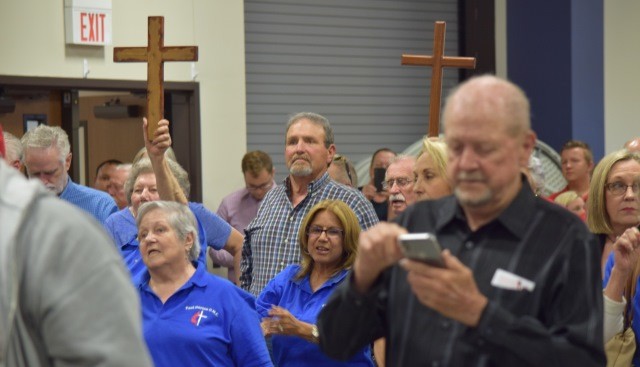 Resident Cloresa Porter warned, “The devil is alive” and “political correctness is a one-way ticket to Hell.” 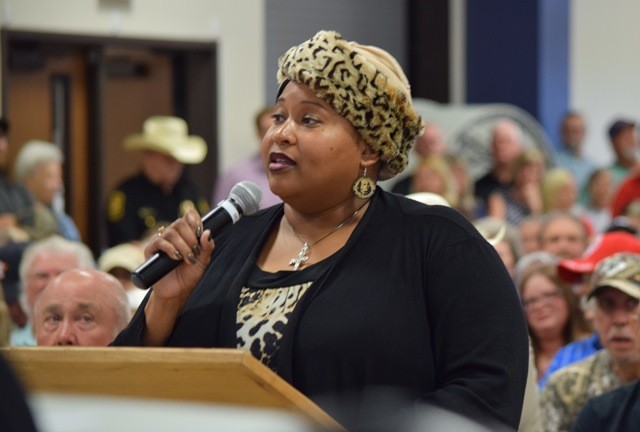 Speakers made several references to the “Wisconsin whiners,” including the chairman of the local Republican Party. Chairman Dwayne Wright reported that Texans from around the state called and offered to attend the meeting. He told them, “San Jac has got this for now.”

William “Maddog” McCulloch, “invite[d] those people from Wisconsin to take the cross off my house.” The veteran warned, “It’s going to weigh a lot more when they leave.” “Go back to Wisconsin. This is Texas.” Another Coldspring resident dared, “Come and Take It.”

Terry Holcomb, Sr. a political activist and pastor of a small rural church near Coldspring, lit up the room when he told the foundation to “Go suck a tailpipe.”

Thomas Lowe reminded about the persecution of Christians around the world. “First they start with symbols, and then they go to Christians.”

Kimberly Young identified herself as someone “with a lot of spiritual beliefs besides Christianity” but she came “to help you keep your crosses.”

James Holcomb and other students at Calvary Christian Academy spoke at the meeting. Holcomb called the demand for removal of the religious symbol “unjust.” “The foundation of this town is built upon God, and just because you cannot respect that, doesn’t mean you can take it away from us.” 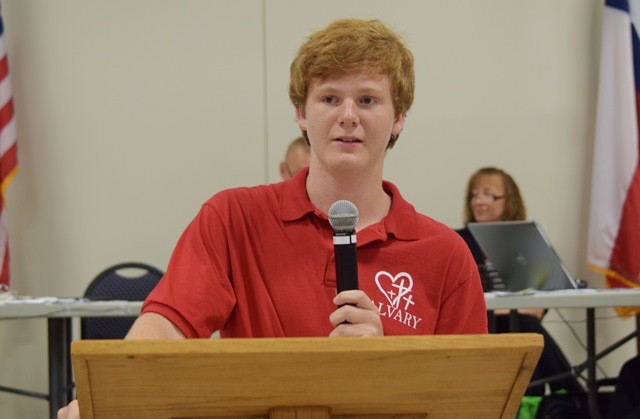 Brother Phil Herrington from First Baptist in Coldspring urged the commissioners, “Don’t help them establish a national religion of Humanism.”

Several speakers invited those who were not Christians to accept Christ. There were shouts of “Thank you Jesus” during the three-minute speeches that continued for nearly three hours. “I came into the community as an Atheist-Agnostic, and I got knocked out by the love of Jesus,” Scott Eschelman told the commissioners.

San Jacinto County Judge Fritz Faulkner responded to the crowd, “Thank you all for making this easy.” The county judge later told Breitbart News, “I think the people have spoken. We are elected by the people and it is our obligation to follow the people.” In Texas, a county judge is the chief executive officer of the county and the presiding officer over the commissioners court.

The commissioners voted unanimously to keep the crosses and ignore FFRF’s demand to remove what it described as an unconstitutional display of “religious iconography.”

The local water management board took another route and voted not to display a cross on its water tower at Christmas. Some booed and jeered when an announcement was made about the special utility district’s decision.

This is not the first time the Freedom from Religion Foundation has come into Texas and threatened a lawsuit, Breitbart News reported. The organization warned they would sue over the display of the national motto “In God We Trust” on patrol cars.

The Texas Attorney General issued an opinion saying the motto may be displayed on law enforcement division vehicles. The San Jacinto County Sheriff Department has the motto prominently displayed on its patrol vehicles. 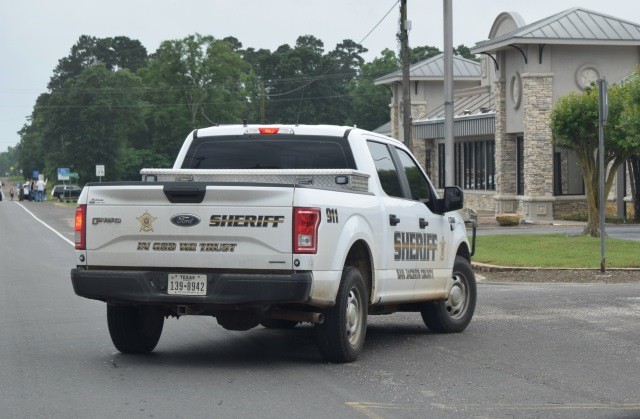 No one spoke on behalf of the foundation or in support of removing the crosses.