The apprehension of migrants who crossed the border into the U.S. reached 1.1 million during Fiscal Year 2019. More than 850,000 crossed into the U.S. illegally. Of those, nearly a half-million of the migrants were family units.

During Fiscal Year 2019, which ended on September 30, U.S.Border Patrol agents and CBP officers apprehended more than 1,148,000 migrants who crossed the border from Mexico into the U.S., according to year-end numbers released by U.S. Customs and Border Protection on Tuesday in El Paso. The El Paso Sector witnessed the largest percentage increase of illegal border crossings in all categories. 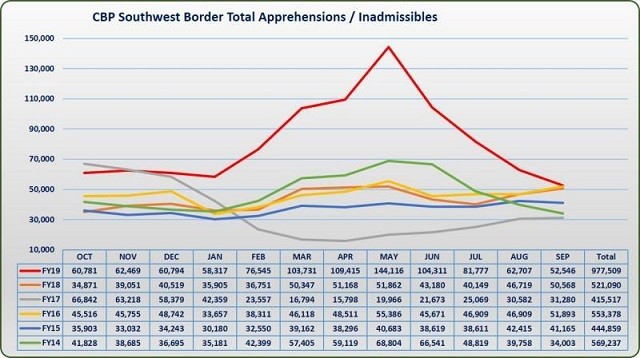 Apprehension numbers declined during the last four months of the fiscal year after peaking at 132,589 in May, according to previously published reports. This is due in part to new Mexican immigration procedures negotiated by the Trump Administration.

Earlier this month, these immigration procedures broke up a caravan consisting of approximately 2,000 from Central America, Africa, and the Caribbean Islands, Breitbart Texas reported. The group began to move northward from Tapachula, Chiapas, early one-morning after being held up for official travel documents. The group quickly encountered Mexican Federal Police and members of the newly formed National Guard.

When the group came upon the police and soldiers, some scattered while others surrendered.

While the number of migrants apprehended while crossing the border into the U.S. fell during the last four months, Commissioner Morgan stated the numbers are still at crisis levels.

“So last month it was down to 52,000,” Morgan stated. “But that’s still a significant increase from this time last year.” Morgan compared May’s daily peak of nearly 6,000 to the September daily average of 1,400 apprehensions per day. “That’s still at crisis levels.”

Family unit migrant crossings are of particular concern to CBP officials due to the increase in resources required to care, transport, and process them.

During FY2019, Border Patrol agents apprehended 473,682 Family Unit Aliens, according to the 2019 Southwest Border Migration Report. This is an increase of nearly 350 percent over last year’s record apprehension of 107,212 family units. The apprehension of Unaccompanied Alien Children also increased by 52 percent to 76,020.