A bilateral extradition treaty between the United States and Mexico has been in effect since 1978. Protocols introduced by President Clinton in 1997 allowed for the temporary surrender of a suspect to be used as a tool to fight crime. Criminal cases involving serious crimes were allowed to be expeditiously brought to justice, and that drastically changed the process between the nations. This concept was ratified in 1998 and became the U.S.-Mexico bi-national strategy.

Two decades later, both countries are facing an unprecedented rise in transnational crimes. Mexico is plagued with intense cartel-on-cartel violence with 35,588 homicides in 2019 alone. During the same time frame, the United States saw a crisis involving human smuggling and trafficking with more than 977,000 apprehensions of illegal border crossers.

Over the last few years, the extradition numbers began to exhibit a great injustice. In 2017, 57 were transferred to the United States; followed by 69 in 2018; and 58 in 2019. In the first two months of 2020, 30 occurred. Extradition may be an old idea re-imagined in 2020. However, it is clear the bi-national agreements requiring expeditious justice have never come to fruition.

The Maryland Journal of Law conducted a detailed review of case-level U.S. Marshals Service data, which reflects most extraditions in conjunction with the FBI and DEA. The data revealed surprisingly small numbers, in comparison to the volume of transnational criminal cases impacting the two countries. 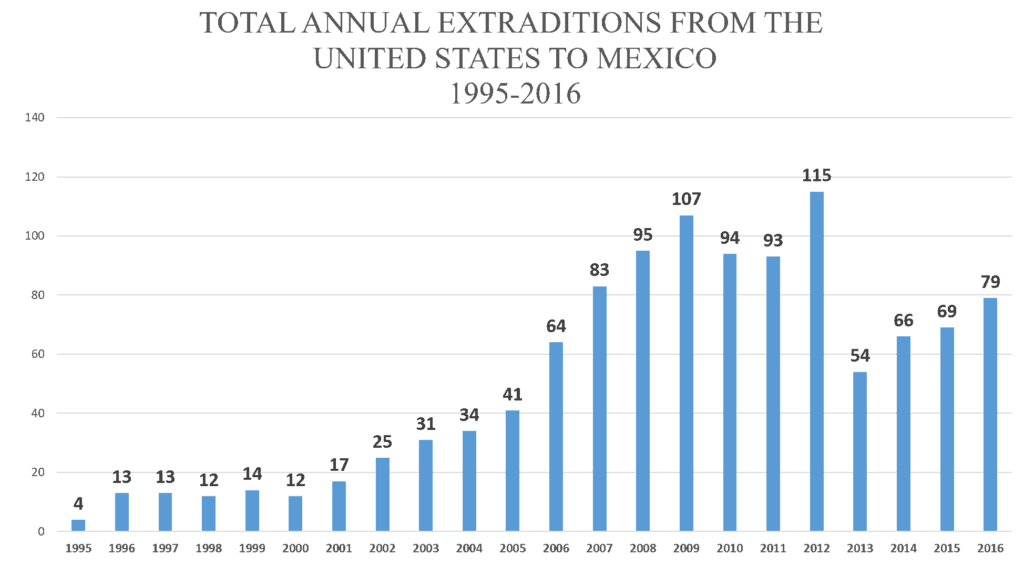 Extradition data from 2003-2016 revealed that 45.3 percent were drug-related offenses. Homicide made up of 27 percent, kidnapping 1.6 percent, human trafficking 0.7 percent, and sex offenses 6.1 percent.

The process for requesting extradition is often based on the severity of the charge. An affidavit is drafted by the U.S. prosecutor’s office to pursue the case and their parent agency then prepares a “package.” The package is sent to the Office of International Affairs within the DOJ. Once approved by Department of State, the package is forwarded to the U.S. embassy in the relevant country, where attorneys develop a diplomatic note for sending to that country’s equivalent foreign affairs department.

The equivalent attorney general for that nation eventually presents the matter before a judicial body, which then can issue a detention order for the suspect with extradition instructions attached. An arrest warrant is issued and executed to apprehend the suspect. But before the one-way ticket to the U.S. is given, the suspect typically has the opportunity to complete any pending domestic criminal matters with appeals included. Labeling the process as complex, complicated, and cumbersome would be an understatement. The average extradition can take six months to a year to complete, if it ever starts at all.

Routinely in Mexico, extradition cases can last years. Cartel attorneys are skilled in leveraging the Mexican judicial system’s appellate process for their client’s interests. As an example, Miguel and Omar Trevino, the former leaders of the hyper-violent Los Zetas Cartel, are in their seventh and fifth respective years of the appellate process with no end in sight. They were recently linked to running their Cartel Del Noreste (CDN) operations from behind bars.

Corruption in Mexico is well documented and a key tenet in the breakdown of that country’s judicial system. Two high profile prison escapes by “El Chapo” Guzman were followed by the most recent incident in Mexico City in January. Ten or more guards are currently being investigated for helping three key cartel members escape prior to their extradition. Víctor Manuel Félix Beltrán, Luis Fernando Meza González, and Yael Osuna Navarro were transferred from high-security facilities for unknown reasons to a moderate security jail. Officials stated a full investigation is underway and three guards are currently in custody. Conviction rates in Mexico vary but average between 1.5 percent and 2 percent across the country.

In 1998, Mexico and the United States identified extradition as a key component in the campaign against transnational crime. Since that time, Mexico’s organized crime transitioned into and insurgency in 2006, rebelling against their government. In 2009-2010, some cartels transitioned again into what many believe are terrorist organizations operating as parallel governments with armored vehicles, military-grade weapons, and ground troops recruited from foreign conventional and unconventional forces.

Today, 22 years have passed and extraditions only trickle by comparison. The justice models implemented from both countries have failed to adequately keep up with the evolution of crime. Both nations bear the moral imperative to develop new policies to meet today’s threats.