A large group of migrants, most likely seeking asylum in the United States, were spotted heading north via a rail route known as La Bestia. The train departed Tierra Blanca, Guanajuato, and will likely arrive at the U.S.-Mexico Border within days, according to Breitbart Texas sources.

Mexican immigration officials and municipal police in Tierra Blanca watched as hundreds boarded and departed. Their exact destination is unknown, but history suggests the Rio Grande Valley is most likely.

Tierra Blanca is one of many stopping points along the route known as La Bestia. Migrants are usually fed by sympathetic residents at waypoints. Some are charged a tax or “piso” by local cartels before they can continue their journey. 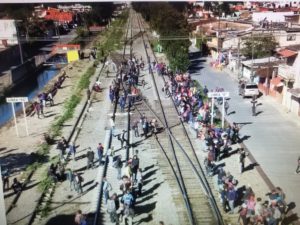 The interest in forming large caravans has increased during the most recent American presidential election cycle. Recent presidential actions are creating excitement for Central Americans, despite appeals from the Biden Administration to not take trips north at this time.