CIUDAD ACUNA, Coahuila – A migrant who tried to escape Mexican police officers drowned shortly after jumping into the Rio Grande near Del Rio, Texas. The fatality comes less than two weeks after a 9-year-old girl drowned in the same region despite attempts by U.S. Border Patrol to resuscitate her.

The most recent incident took place Tuesday afternoon in Ciudad Acuna, in an area known as La Punta Del Barco or Ship’s Point. There, 25-year-old Eduardo Orrante Rodriguez, a Salvadoran, fished on the bank and spent several days waiting to be smuggled into Texas. 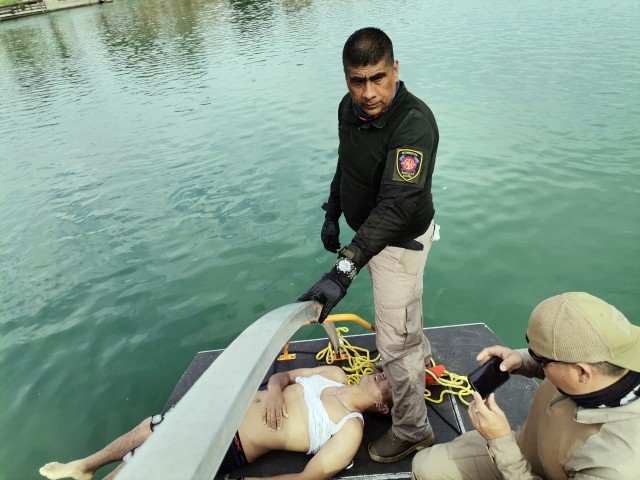 As he was fishing, Rodriguez saw a Mexican police vehicle chasing what appeared to be a group of migrants. Rodriguez jumped into the water and tried to swim to Del Rio, Texas, where he was apparently caught in the current.

Firefighters and Mexican immigration officials searched for Rodriguez but were not able to find him until an hour later. After pulling him out of the water, authorities tried to revive him and eventually turned the body over to the local coroner.

Coahuila is seeing a spike in similar drownings. On March 20, a 9-year-old girl drowned in a failed attempt to get across the Rio Grande. Breitbart Texas published an exclusive video showing the efforts of Border Patrol agents to try to revive her.

Editor’s Note: Breitbart Texas traveled to the Mexican States of Tamaulipas, Coahuila, and Nuevo León to recruit citizen journalists willing to risk their lives and expose the cartels silencing their communities.  The writers would face certain death at the hands of the various cartels that operate in those areas including the Gulf Cartel and Los Zetas if a pseudonym were not used. Breitbart Texas’ Cartel Chronicles are published in both English and in their original Spanish. This article was written by “C.E. Herrera ” from Coahuila.