A Texas Department of Public Safety trooper sustained injuries during a crash near Artesia Wells, Texas, on Friday afternoon. The crash occurred during the pursuit of a stolen ambulance.

A multi-agency pursuit ensued after a stolen ambulance fled an interior Border Patrol immigration checkpoint on Interstate 35 near Artesia Wells, according to a law enforcement source in La Salle County, Texas. 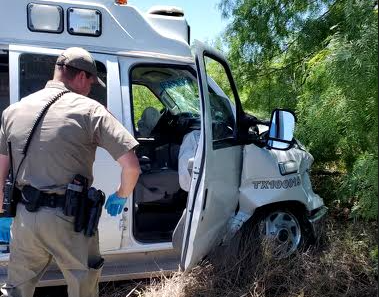 A Texas DPS trooper sustained injures after being struck by the driver of a stolen ambulance. (Photo: Texas Law Enforcement Source)

The ambulance, according to the source, was stolen in Laredo, Texas, and fled around the Border Patrol Checkpoint by driving in the southbound lanes of the interstate. After law enforcement authorities attempted to deploy a tire deflation device to stop the vehicle, the ambulance struck the Texas Department of Safety trooper’s vehicle causing significant damage.

The highway remains closed currently as Texas DPS investigates the accident. An air ambulance transported the trooper to a San Antonio hospital for treatment of injuries sustained in the accident. The source says a Laredo resident reportedly stole the private ambulance after summoning for medical assistance at his residence. 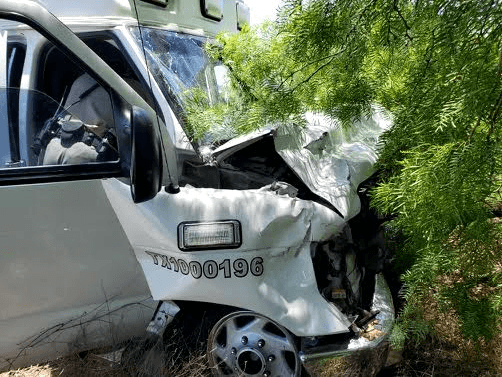 Pursuits in this area are a frequent occurrence although mostly involve illegal migrant traffic. According to the La Salle County Sheriffs Office, they have been involved in six pursuits since May 1. All but one involved illegal migrants — the remaining involved a narcotics smuggler. All vehicles used by the smugglers were stolen.