EAGLE PASS, Texas — The State acquired a large quantity of 30-foot wall panels from the Biden Administration to utilize in the construction of a border wall. The materials came from federal contracts cancelled in January 2021.

“Texas is the first state ever to build a border wall,” Governor Abbott began in an exclusive interview. “A lot of the border wall is being built by border wall material that there was a contract for, Texas bought it from contractors who built the wall for President Trump. We’re building the exact same wall.” 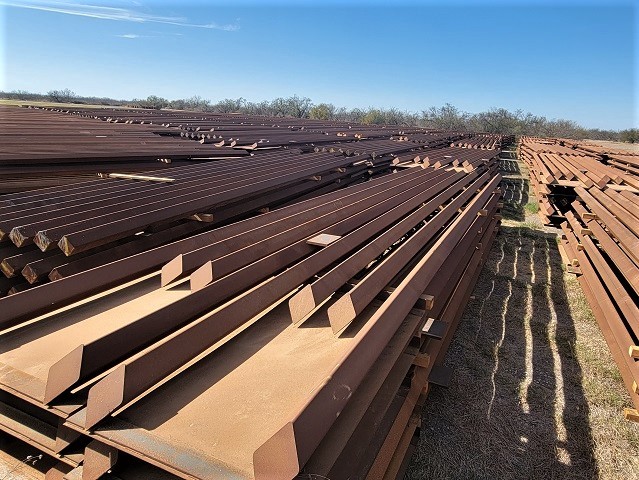 Texas acquired enough panels of border wall material at no cost from the Biden administration to build up to two miles of Texas border wall. (Bob Price/Breitbart Texas)

“In addition, a lot of people saw on TV a lot of these border wall components like this that were just laying on the ground, that taxpayers had paid for,” the governor added. “Biden chose not to build the wall.”

“We found a way, by going through the surplus program of the federal government where Texas would be able to obtain these border wall panels and we obtained as much as we could, until Biden found out about it,” Abbott explained. “He put a stop to Texas being able to get it. There may be some other ways that we will be able to get more.”

The stacks of panels appeared to cover more than an acre of the land.

The governor explained the first parts of the Texas project were built on state-owned land. The new sections are scheduled to be built on parcels provided by ranch owners.

“Texas is not having to use eminent domain,” Abbott explained. “People who own property on the border are so angry against the Biden administration, so frustrated by the chaos and the crime created on their own property, they are giving us an easement to build the border wall.”

Because of getting both the materials and land without cost to Texas taxpayers, “Texas is able to build the wall at a faster pace and a lower cost than even what President Trump could do.”

“The bottom line is the border wall panels that Biden was allowing to lay on the ground will be up and protecting and securing the Great State of Texas,” he continued.

This is the first part of an exclusive interview with Governor Abbott. Watch the full interview below.