During the heated exchange over President Obama’s failure to describe the attacks at the American consulate in Libya a terrorist act, the audience at last night’s debate in Hofstra University broke out into applause several times, defying the strict rules laid out beforehand.  In this revealing clip, first lady Michelle Obama is seen (at the 19 second mark, dressed in fuchsia at the bottom of the screen) as leading a round of applause after moderator Candy Crowley sides with Barack Obama in the dispute.

Here is a picture of Mrs. Obama after the debate where she is clearly wearing the same dress as seen in the clip: 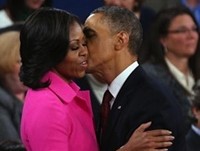