Breitbart News is carrying the livestream of the Stop Iran Rally from Times Square in New York City today beginning at 5:30 p.m. ET.

Best speech of the night: Judging by how widely it is being shared on Facebook, this was the winner, from former U.S. Rep. Allen West.

A close second–Caroline Glick’s speech, which brought tears to more than a few eyes:

8:30 p.m. EDT: The rally finally ends. As the speakers continued, a full hour past the scheduled end of the rally, so did the enthusiasm and intensity.

Juan Hinojosa traveled from Brooklyn to participate in the rally. He said, “As an American I am disgusted with President Obama, the Democratic Party and the weak GOP in Congress. They are a disgrace to this nation and I cannot wait until 2016 when Obama’s gone.” 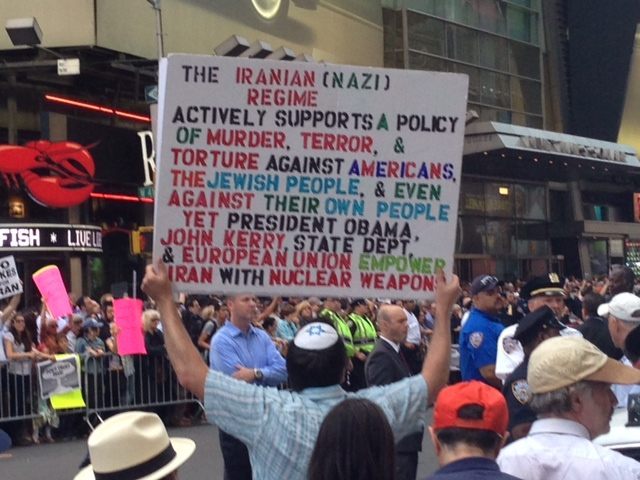 7:30 p.m.EDT: The rally, stretching six blocks long and over 10,000 strong, was due to end at 7:30, but continues with a roster of speakers, including Steven Emerson of the Investigative Project on Terrorism, Former Rep. Pete Hoekstra (R-MI), and many others.

She warns that even if Iran abides by the agreement, “in ten years’ time it can build nuclear weapons at will.” She calls on Sen. Schumer and several of New York’s Democratic U.S. Representatives.

“You know what to do, unless you have no honor and no shame….You will not only vote against this deal, you will talk to all of your friends in the Democratic Party…you will tell them you can claim to care about the security of the United States of America and support this deal.” 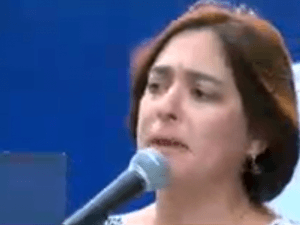 6:55 p.m. EDT: Advocates for the American captives, and for victims of Iranian-backed terror, take the stage. The anger against Obama is severe: “You couldn’t even pronounce their names properly….You, Mr. President, have become our national nightmare.”

6:45 p.m. EDT: Former CIA director James Woolsey, another Democrat, criticizes the Obama administration for ignoring the pro-democracy protests in 2009, and focuses his remarks on the totalitarian nature of the Iranian regime.

6:35 p.m. EDT: Alan Dershowitz, noted Democrat and Hillary Clinton supporter, comes to the stage. He says that it is important that opposition to the Iran deal remain bipartisan: “It is a bad deal for Demcorats. It is a bad deal for liberals. I am here opposing this deal as a liberal Democrat.”

Dershowitz attacks the way in which the deal is being handled, with democracy being “ignored” as the Obama administration circumventing Congress. “That is not the way democracy should operate. This deal is essentially a treaty. It binds the United States in a multi-national way. This treaty should be submitted to the Senate for two-thirds approval. But the president won’t do that.”

Dershowitz criticizes Obama for taking the military option “off the table,” which allowed Iran “to negotiate with us as equals,” which is how the deal that resulted was so good for Iran and so bad for everyone else.

He warns that Benjamin Netanyahu will take “whatever actions” he has to take to stop Iran. The crowd cheers.

6:20 p.m. EDT: Organizers estimate attendance at the Stop Iran Rally at over 10,000 in Times Square.

The rally hears from presidential candidate and former New York governor George Pataki, who led the state during 9/11.

He takes a dig at Hillary Clinton: “She has embraced this agreement…Hillary, let me tell you one thing: America does not need as our next president another appeaser-in-chief.”

6:10 p.m. EDT: Organizer Jeffrey Wiesenfeld continues the focus on Sen. Chuck Schumer (D-NY), “Where are you, Chuck?” He tells the crowd about White House efforts to twist the arms of wavering Democrats, warning that the Obama administration will give a green light to “pro-Israel” Democrats to vote against the bill once they have enough votes in hand to pass it.

“This is our civil rights! Our right to live! It will not be enough if those Congress members say they are opposing the bill
because they got permission from Valerie Jarrett.”

He warns Schumer to round up votes against the bill, or “we will throw you the hell out.” The crowd roars. He offers Schumer “a chance for redemption” if he stands up to Obama and rallies opposition to the deal. “Chuck, this is your moment! This is your time to make the decision.”

5:50 p.m. EDT: Fox News contributor Monica Crowley offers the most powerful speech of the rally so far: “Everybody who’s here tonight in Times Square wants to save Western Civilization before it’s too late,” she says. “Never again! Seventy years after the Holocaust, have we forgotten already?”

She adds: “Of the countless destructive things President Obama has done, this deal is the most dangerous of all….President Obama says that he can basically do what he wants because ‘he’s got a pen and a phone.’ Well, guess what, Mr. President? We’ve got pens and phones, too.”

Crowley singles out Sen. Charles Schumer (D-NY), daring him to lead. She said that Schumer would not be able to get away with voting against the deal once enough votes were secured for its passage.

5:40 p.m. EDT: The rally is well under way, kicking off with a speech by prominent publisher and editor Mort Zuckerman. His address is heavy on detail, but mentions of the Iranian regime and Secretary of State John Kerry draw loud boos from the crowd, now apparently several thousand strong.

#StopIranRally in Times Square. My view from from my @thomsonreuters window pic.twitter.com/TfArlry4pw

5:00 p.m. EDT: One very important theme at the rally, as Jacob Kornbluh points out in the tweet below, is the central role that New York’s own Sen. Chuck Schumer (D) will play. The self-described “guardian of Israel” has declined to oppose the Obama administration in recent battles, but is said to be carefully weighing his response to the Iran deal. The entire rally could be described as a giant message to Schumer, because if he opposes the deal, other Democrats will follow (and vice versa).

Crowd are gathering with signs–some handed out, some clearly home-made.

4:45 p.m. EDT: Demonstrators are arriving in significant numbers, along with national media. Fox News devoted a segment to the rally, and their cameras are there to record the action.

One of the main organizations behind the protest, StandWithUs, has tweeted a list of 19 key U.S. Senators, all Democrats, that it is asking the public to contact.

If just 13 Democrats join Republicans in opposing the deal, they will override a presidential veto and the deal will fail (assuming a similar two-thirds majority can be assembled in the House).

The event was coordinated by the Jewish Rapid Response Coalition, a grassroots organization concerned with the potential for a nuclear-armed Iranian regime.Over 100 partners are sponsoring the rally.

Other rallies are scheduled this week and next nationwide. A partial list is here.

The idea for the Stop Iran Rally came to fruition following the nuclear accord agreed to by the P5+1 world powers (US, UK, Germany, France, China, Russia) and the Iranian regime. Organizers expect that thousands of concerned Americans will be at the Times Square rally.

Featured speakers will include:

Breitbart News will be there with timely interviews from the major players at the event.