Brandon Straka, founder of the #WalkAway campaign encouraging Americans to leave the Democrat Party and left-wing ideology, told Breitbart News on Saturday that many participants in the Women’s March in Washington, DC, “don’t really know why they’re here.”

Straka joked, “I came out here today in the freezing cold so that I could be a part of this beautiful Women’s March which celebrates all women regardless of their political beliefs, or if they’re pro-life. It’s just the warmest vibe that you get here today at the women’s march. I’m just kidding. It’s actually just an anti-Trump rally.”

Straka outlined what he called “the arrogance of liberalism and feminists,” by pointing to the fact they “believe that they are more evolved than other women. I think they naturally feel like they speak on behalf of all women, and that any women who don’t agree with their point of view, any women who are pro-life, pro-our president, or pro-this administration are very, very stupid, and therefore don’t serve to have an opinion, anyway.”

Straka added, “I think in their minds, through their arrogance, they believe that they’re the only women who really have the right to have a point of view, and that they speak on behalf of everybody.”

Straka shared some anecdotes from the Women’s March, “A lot of these women will blatantly tell you that they’re here because they hate Trump, they hate this administration. A couple of women just sort of accosted us a moment ago and said, ‘Thank you so much. You’re ruining the country. Thank you so much for giving us Trump. My economy’s not better.’ I don’t think they realize that there’s one economy. It works for all us. It’s better for everybody. Everybody’s doing better.”

Straka continued, “I think it’s just a lot of hostility, once again, if you have a point of view that’s different than theirs.” 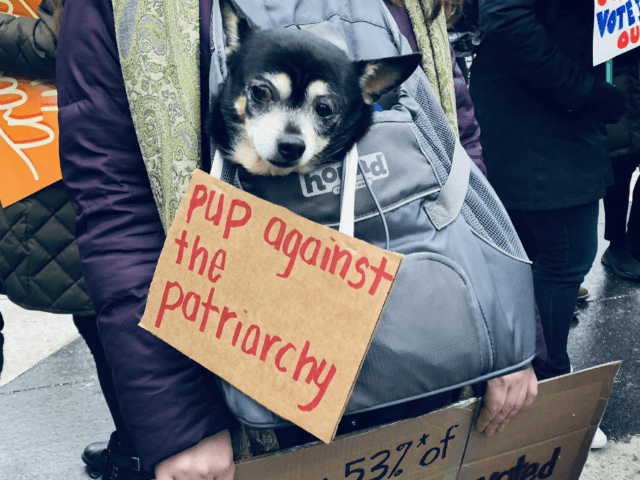 Straka encouraged Democrats uncomfortable with the direction of their party to “walk away” from their party affiliation.

“One thing I would say to Democrats who are looking around and starting to feel uncomfortable and saying, ‘There’s something wrong with my party. There’s something wrong the ideology of liberalism.’ They look around at something like the Women’s March and they say, ‘I think feminism has gone a little bit loco.’ They should pay attention to that feeling. There’s a reason you’re feeling that way.

Straka went on, “We live in a time; this is a really, really great time in America. Our economy is doing great. We have a president in the office who really cares about us, and still, in spite of that, we have thousands of women out here who are protesting and chanting, feeling like they don’t have equal rights. I don’t know if these women were just dropped off from a time machine, but there is nothing in 2019 that women can’t do that men can do.”

Straka stated, “It’s an illogical protest. It makes no sense. So if you’re feeling that way, you’re right to feel that way, and you should walk away from it.”

Straka continued, “There seems to be this general sense that a lot of people don’t know why they’re here. They have no idea why they’re holding the signs they’re holding. Most importantly, they haven’t even researched the leadership of the Women’s March and what it is that they’re really supporting.”

Straka concluded, “There seems to be a lot of corruption. We know that some of the leaders are involved in some serious allegation of anti-Semitism and associating themselves with huge anti-Semites like Louis Farrakhan, so I think that’s something people should research and put a little bit and put a little bit of thought into before they just grab a sign out of a truck, show up, and join in the mob.”