The Los Angeles Police Department (LAPD) is anticipating “unrest” and “riots” around Election Day as morale continues to plummet among rank-and-file cops, according to internal department sources. They said a few hundred cops are expected to retire in January, which would deal a blow to a department already struggling to maintain the peace and to protect its own officers from attacks. 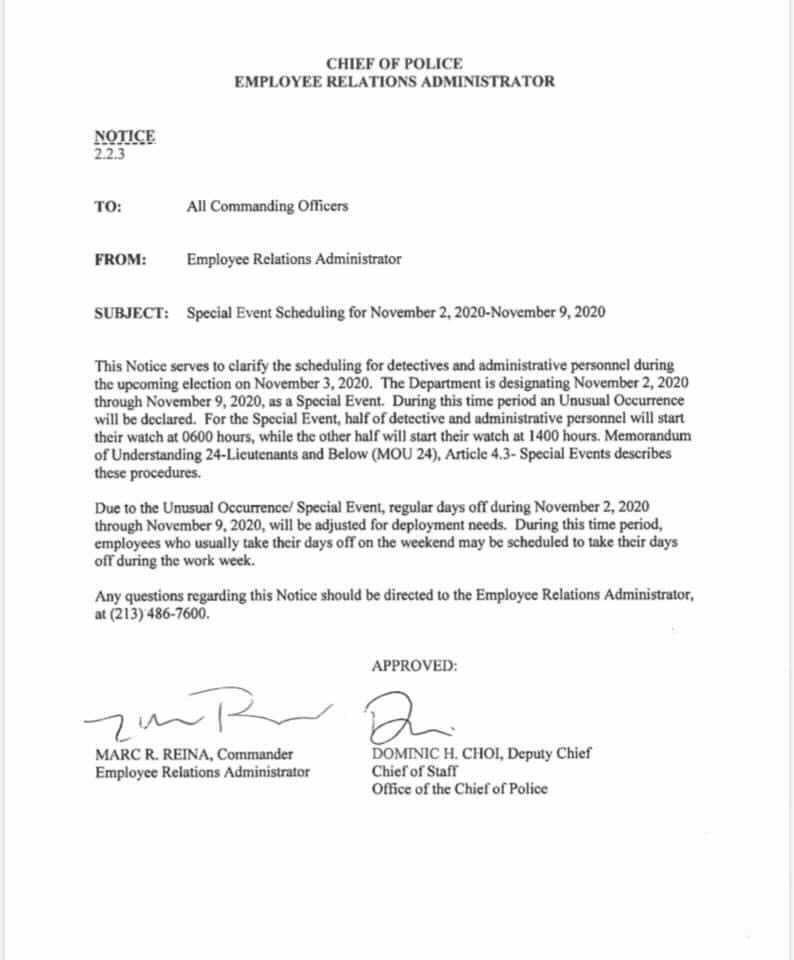 LAPD leaders recently sent an internal email designating the period of November 2 to 9 as a “special event,” with modified hours and time off for department personnel, according to a copy obtained by Breitbart News. Police leaders also said they will declare an “unusual occurrence” during that period, but they didn’t elaborate what that would entail.

“They are expecting unrest [and] riots,” an LAPD source told Breitbart News. The source said that officers will do “what they have to do as they are directed” during the period. But the source added that the department’s older officers “are tired of the situation” — a reference to months of Black Lives Matter rioting and a recent string of unprovoked attacks on local law enforcement.

Another LAPD source told Breitbart News that the email indicates LAPD leaders are going into “emergency mode” in anticipation of a Trump victory on November 3. “Changing everyone’s works schedule is going to further lower morale in the department,” the source said.

The internal sources told Breitbart News that a mass exodus of retirements is expected in the department in January, with one of the sources estimating that more than 400 officers will leave, including a third of LAPD Chief Michel Moore’s own command staff.

“Moore is too arrogant to see this as a sign of his, the city council’s, and [Mayor Eric] Garcetti’s failed leadership,” the source said. Under Garcetti’s leadership, the city has bowed to far-left activists’ demands to defund the police, stripping the LAPD of $150 million in funding.

Cops are waiting until the new year to retire because a new contract will pay them 100 percent of their sick time. Prior to that, officers only received 50 percent of sick time, according to the sources.

LAPD morale has taken a hit in recent weeks following a series of unprovoked gun attacks on police.

Three LAPD officer came under gun fire in September during separate attacks at the Harbor Station in San Pedro and another near the West Valley Community Police Station in Reseda. The attacks follow the horrific ambush of two L.A. County Sheriff’s deputies in Compton, during which the two deputies were shot.

Police in New York are also reportedly preparing for civil unrest around Election Day. An internal New York Police Department memo obtained by multiple news outlets is requiring most officers to report for duty in uniform starting October 25, including some plain-clothes members of the department who don’t usually work in uniform.