A video of a K-9 apprehending a suspect is under investigation by the St. Louis County Prosecutor’s office as the video shows the dog biting the subject two different times for 30 seconds in each instance.

The video, captured in Woodson Terrace, Missouri, begins with the male suspect being held against the hood of a vehicle when a handler brings a K-9 over to the suspect. The officer then grants slack to the dog’s leash, and the K-9 latches onto the suspect’s foot. For nearly 30 seconds, the dog works to apprehend the suspect to the ground, constantly biting the man’s leg.

Once the K-9 releases him, the man then attempts to run away. As he begins to stand and move away, the officer then releases the dog on him again, which results in the animal biting the leg of the suspect again for over 30 seconds. Officers are then able to handcuff the man.

The matter is being investigated by St. Louis County Prosecutor Wesley Bell, who announced that his office, “is aware of this video, and we will make a thorough review of the incident.” Bell did not provide media with further comments regarding the matter.

The incident occurred at 7:18 am when officers responded to a call regarding a trespasser who refused to leave a business according to a Facebook post from the Woodson Terrace Police Department. When officers arrived on the scene “the subject immediately started threatening to kill the officers and identified as a sovereign citizen,” the post reads. 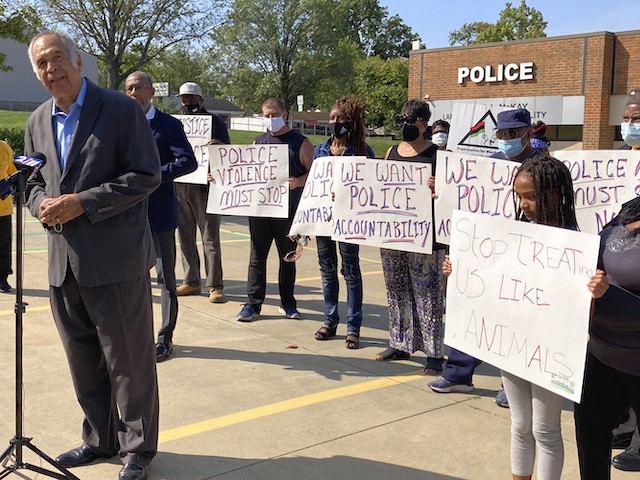 The subject reportedly continued to defy commands and walked away from officers toward rush hour traffic. Officers then informed the subject he was under arrest after “officers observed that the subject was under the influence of a narcotic,” the post states.

Officers called an ambulance to the scene but the man refused treatment according to the police department. Once he was taken to Woodson Terrace Police Department he began to voice his pain regarding the injuries, and he was taken to the local hospital for treatment the post states. Officers said that they discovered suspected methamphetamine after arresting the subject.

The St. Louis Post-Dispatch Editorial Board published an article likening the incident to Alabama in the 1960s. “Somehow, all of the lessons from 1960s Alabama to 2020 Minneapolis about race-based law enforcement were lost on three white Woodson Terrace police officers as they tried to make an unarmed Black man submit to their will on Monday,” the editorial reads. “Video by a passerby showed the officers releasing an attack dog to rip repeatedly into the suspect’s leg, just like Birmingham’s infamous public safety chief, Bull Connor, did in the 1960s to deter Blacks from marching for equal rights.”