Former President Barack Obama told an African audience that voters’ preferences for their own nation are no excuse for keeping nation-states and that all governments should welcome migrants who are “striving for a better life.”

Obama hid his radical globalist call for ending the 200-year old dominance of nation-states under his signature style of passive-aggressive rhetoric, saying:

In the West’s current debate around immigration, for example, it’s not wrong to insist that national borders matter; whether you’re a citizen or not is going to matter to a government, that laws need to be followed; that in the public realm newcomers should make an effort to adapt to the language and customs of their new home. Those are legitimate things and we have to be able to engage people who do feel as if things are not orderly.

But those public priorities “can’t be an excuse for immigration policies based on race, or ethnicity, or religion,” he said a July 17 speech in Johannesburg, South Africa.

Instead, national immigration laws should be subordinate to the claim that all humans share an “essential humanity  … [of] striving for a better life,” who are to be viewed as just like “anybody in our family,” he said:

We can enforce the law while respecting the essential humanity of those who are striving for a better life. For a mother with a child in her arms, we can recognize that could be somebody in our family, that could be my child.

Obama’s passive-aggressive demand is that immigration policies can only be legitimate if they reject any claim that a nation belongs to its ethnic group — for example, that Hungary belongs to Hungarians, or America belongs to Americans.

In his speech, Obama also demanded that race be excluded from policy calculations. But race is already peripheral to nationalism and the nation-state. Dutch nationalists don’t argue that blacks cannot be Dutch because they are black — they argue that Holland should be for the Dutch because that is where the Dutch live. Similarly, Irish nationalists fought the English regardless of their shared white racial background.

Obama is also demanding that religion be excluded from immigration policies. If his preference were implemented, Westerners would not be allowed to exclude Islamic believers from their societies which are based on Christian ideas and practices, and the Saudi government could not exclude San Francisco liberals. Arab Muslims, for example, are who “striving for a better life” would be regarded as equally legitimate members of Norwegian society because officials must disregard cultural differences buried under ethnic and religious differences.

For Obama, cultural and religious differences are either superficial or a fraud. “We are all human … our differences are superficial,” insisted Obama, lumping together Swedes and Yemenis, Chinese and Somalis, Americans and Koreans. “It is a truth that lies at the heart of every world religion – that we should do unto others as we would have them do unto us,” he said, ignoring Islam’s commandment for believers to hate non-Muslims.

Obama dismissed the evidence that some cultures are better than others:

Embracing our common humanity does not mean that we have to abandon our unique ethnic and national and religious identities …  you can be proud of your heritage without denigrating those of a different heritage. (Applause.) In fact, you dishonor your heritage. It would make me think that you’re a little insecure about your heritage if you’ve got to put somebody else’s heritage down.

But Obama pivoted to warn that war is inevitable if his anti-nationalist policies are not adopted:

The fact that countries which rely on rabid nationalism and xenophobia and doctrines of tribal, racial or religious superiority as their main organizing principle, the thing that holds people together – eventually those countries find themselves consumed by civil war or external war. Check the history books.

Obama also slammed the international business groups which he empowered by promoting easy migration during his term as president:

In their business dealings, many titans of industry and finance are increasingly detached from any single locale or nation-state, and they live lives more and more insulated from the struggles of ordinary people in their countries of origin. (Applause.) And their decisions – their decisions to shut down a manufacturing plant, or to try to minimize their tax bill by shifting profits to a tax haven with the help of high-priced accountants or lawyers, or their decision to take advantage of lower-cost immigrant labor, or their decision to pay a bribe – are often done without malice; it’s just a rational response, they consider, to the demands of their balance sheets and their shareholders and competitive pressures.

Instead of the populist or business groups, Obama pushed for rule by college-graduate political activists, such as himself:

for those of us who care about the legacy that we honor here today – about equality and dignity and democracy and solidarity and kindness, those of us who remain young at heart, if not in body – we have an obligation to help our youth succeed. Some of you know, here in South Africa, my Foundation is convening over the last few days, two hundred young people from across this continent who are doing the hard work of making change in their communities; who reflect Madiba’s values, who are poised to lead the way.

Obama pushed this anti-national globalist pitch throughout his presidency. But Obama hid his pitch for globalism under his passive-aggressive style, allowing most media outlets to simply ignore Obama’s radical priorities. In November 2015, for example, he argued:

Part of what’s wonderful about America is also what makes our democracy hard sometimes, because sometimes we get attached to our particular tribe, our particular race, our particular religion, and then we start treating other folks differently. And that, sometimes, has been a bottleneck to how we think about immigration.  If you look at the history of immigration in this country, each successive wave, there have been periods where the folks who were already here suddenly say, well, I don’t want those folks.  Even though the only people who have the right to say that are some Native Americans.

But Obama’s anti-national, globalist priorities have had huge political effects. For example, Obama’s lowered the barrier to migrants from the south, prompting roughly half a million migrants from Central American to move into Americans’ blue-collar jobs, neighborhoods, and schools.

In 2013, Obama pushed the radical 2013 cheap-labor-and-amnesty bill. The amnesty would have given away 30 million green-cards in 10 years and shifted annual income to Wall Street investors, but it was blocked in 2014 by GOP primary votes. That amnesty fight helped the Democrats lose nine Senate seats in 2014, and also launched Donald Trump on his path to the presidency. 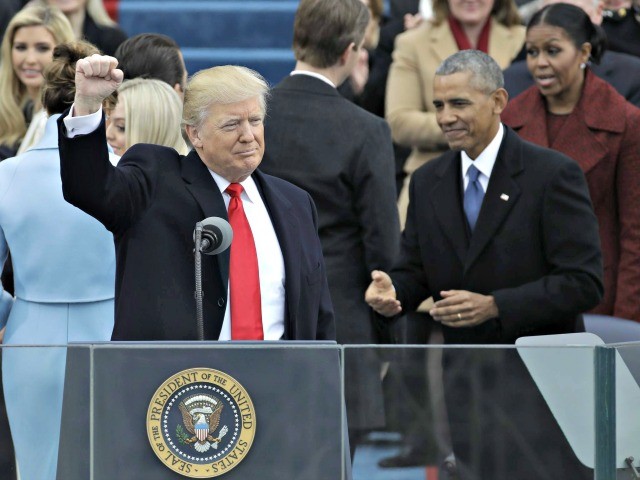