Metropolises stationed in blue states and giant monopolies are increasingly dominating the American economy with their concentration of corporate power, research finds.

Analysis by Bloomberg News this month revealed that just 31 counties in the United States now make up more than 32 percent of U.S. gross domestic product (GDP) despite only being home to about 22 percent of the nation’s population and 26 percent of the workforce.

The nation’s economy is becoming increasingly concentrated in large cities and by the coasts — and less so in rural counties — spurring the question of whether rural areas will be increasingly left behind. The growing concentration of the country’s economic activity could impact a variety of things from infrastructure spending to labor mobility, but it’s unclear how rural areas will fare as their share of economic output continues to dwindle. 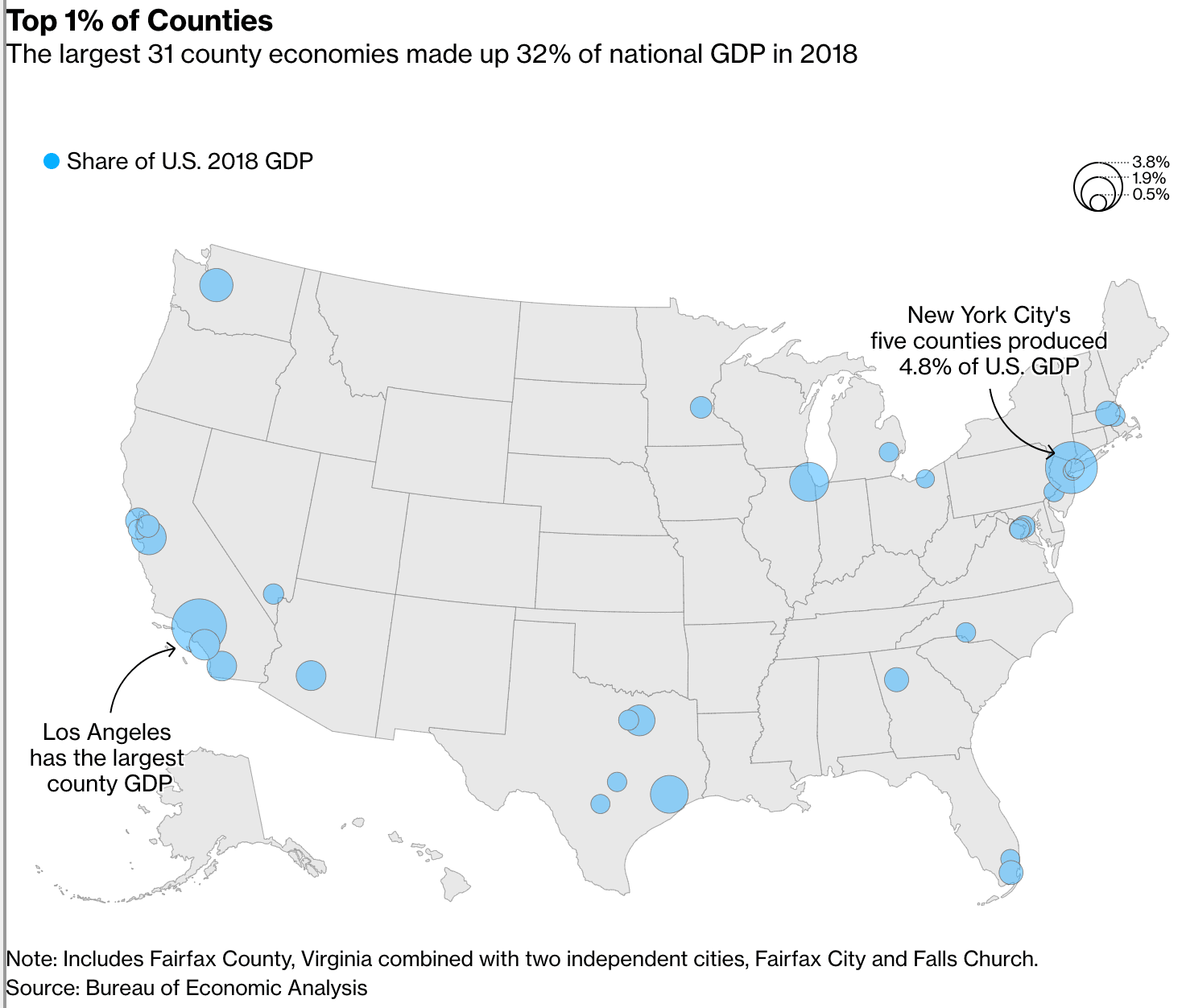 As a result, industries are increasingly concentrated in these metropolises along the coasts. The information and tech sectors, for example, are mostly settled in Silicon Valley, California and San Francisco. The financial sector continues to have a stronghold in Manhattan.

While the entertainment industry is less concentrated in Los Angeles, it is not because of a growing foothold in a smaller city or middle America state but rather because New York City has increased its share of the industry.

Extensive research by the Open Markets Institute has detailed from pharmaceuticals to retail where just one or a few corporations dominate whole industries in the U.S.

Today, a single corporation, Walmart, controls 72 percent of warehouse clubs and supercenters in the entire United States. In close to 40 metropolitan areas across America, Walmart sells more than half of all groceries. Amazon, meanwhile, dominates e-commerce in general, and many specific lines of business. The corporation, for instance, sells 74 percent of all e-books and 64 percent of all print books sold online.

With airlines, mergers have allowed just four corporations — American Airlines, United Airlines, Delta Airlines, and Southwest Airlines — to control about 80 percent of the market. The same is true of rental car companies, where Enterprise, Hertz, and Avis effectively controlling the entire market.

Sen. Josh Hawley (R-MO) has said the concentration of economic power and wealth must be challenged by Republicans and Democrats in defense of America’s working and middle class:

I think that we have here at the same time that our economy has become more concentrated, we have bigger and bigger corporations that control more and more of our key sectors, those same corporations see themselves as less and less American and frankly they are less committed to American workers and American communities.