President Joe Biden’s draft amnesty bill includes at least three legal changes that pressure and reward CEOs for importing foreign workers to take the white-collar careers needed by U.S. graduates, including the millions of young graduates who voted for Biden.

The college graduate language in Joe Biden’s top-priority “U.S. Citizenship Act of 2021,” bill “is going to force a debate on every college campus and focus the attention of American students about how they’re being pushed out of the job market,” said Kevin Lynn, founder of U.S. Tech Workers. He continued:

This is going to create a backlash on the college campuses. No level of woke ideology is going to suppress the fact that students are going to wake up very quickly to the fact that they have put an awful lot of money into getting a degree, only to be pushed out of the workforce [by Democrats].

The debate will also supercharge the growing revolt by American professionals who have seen their jobs, careers, and wealth transferred to foreign contract workers throughout the Fortune 500. Those professionals demand their right to a national labor market as they helped block the S.386 outsourcing bill in 2020 that was pushed by Sen. Mike Lee (R-UT).

The draft of the bill was released on January 20, and White House officials confirmed the top three Fortune 500 giveaways in a February 17 press conference.

The first of the changes in the amnesty would provide green cards to an unlimited inflow of foreign people who pay tuition to get technology-related PhDs from eager U.S. universities.

A third rule would allow employers to provide more than 140,000 green cards to non-immigrant contract workers via the existing Employment-Based Immigration process. The larger allocation would be more than double the current award to 75,000 workers per year. The number would allow CEOs to pay all of their imported H-1B and L-1 visa workers with green cards — and leave plenty left over to attract more foreign nurses, therapists, and doctors to the jobs needed by Americans.

The knock-on effects will be far larger.

The CEOs’ current ability to dangle roughly 75,000 green cards a year attracts roughly one million foreign graduates into a wide variety of gig-worker jobs throughout the United States. They take the gig-work jobs — which are mostly lower-paid, subcontract, mid-skill, drudgework — because they are competing against each other to get their CEOs to provide them with one of the 75,000 green cards allocated each year to employees.

That million-worker population includes roughly 600,000 foreign white-collar workers who are stuck in their jobs while waiting for their CEOs to deliver the approved green cards.

Biden’s amnesty bill would allow CEOs to dangle not just 75,000 cards each year — but dangle millions of green cards to millions of white-collar workers around the world.

Crucially, there is no limit on the number of foreigners who can get work permits for U.S. jobs — they just have to have enough cash to enroll at a third-rate U.S. college to get work permits via the tax-favored, low-wage, unsupervised Curricular Practical Training (CPT) and Optional Practical Training (OPT) programs. Under Biden’s bill, CEOs will be able to hire foreign graduates in place of Americans with a promise of a green card after ten years of hopscotching from temporary visa to short-term work permit, and back again, in the United States or overseas.

The rational, predictable result will be a massive inflow of foreign graduates into U.S.  jobs.

This huge inflow will damage docile American college graduates, just as the massive inflow of blue-collar migrants smashed up the blue-collar working class in California. Their salaries will stall or decline, their status as professionals will be commoditized, their housing costs and commutes will rise, and their children will face tougher competition for slots at good schools and universities.

Already, federal data shows that salaries for college graduates dipped two percent from 2016 to 2019, even as blue-collar wages surged amid Trump’s crackdown on blue-collar migration.

The white-collar giveaway to the Fortune 500 CEOs is a central part of Biden’s plan, not a discardable flourish.

It is central to the plan because the Fortune 500 companies — especially the Silicon Valley companies — rallied to the Biden campaign to get those benefits. Facebook’s Mark Zuckerberg, for example, played a central role in Biden’s election, and his FWD.us advocacy group has been pushing hard for these white-collar workers.

It is also central because progressives need the CEOs and their lobbyists to pressure the GOP into accepting the amnesty that will push more Republicans out of office. The swap was described on January 21 by Biden’s chief amnesty advocate in the Senate, Sen. Bob Menendez (D-NJ):

We need the high-tech community — who will benefit from the reforms we are proposing — to be advocates of the overall reform movement. We need those who need the H-1B and [H]-2B visas in the business community to be advocates of overall reform. What we cannot have is only being an advocate for the simple niche that takes care of your economic issue, but doesn’t resolve the overall question of the 11 million.

When we join together — those and so much more — we can achieve the [amnesty] goal because then those senators and those members of the House who represent large agricultural interests in their districts and state, those who represent high-tech interests in their state, those who represent some of the [H-2B] critical workers — whether it be in the seafood industry in the meatpacking industry or whatnot — who need that work …  so that people understand that this is something worthy of putting their [political] capital [on].

So far, the establishment press has not publicized Biden’s promised flood of foreign white-collar workers. “There is nothing remotely radical in what he wants to do,” said an oblivious column by E.J. Dionne in Jeff Bezos’ Washington Post newspaper. An editorial by the newspaper’s editorial board simply ignores the white-collar issue.

But Biden’s push to flood the market for college jobs can shift politics, said Lynn.

The push will force U.S. graduates to recognize their common interests with the many blue-collar Americans who backed President Donald Trump’s populist immigration reduction platform, he said. If Republicans spotlight the danger, they can win a critical share of swing-voting graduates in the 2022 and 2024 elections, Lynn said.

Trump missed this opportunity in 2020 by ignoring the economic impact of migration on swing-voting Americans. Instead, he talked about low priority concerns, such as migrant crime, welfare spending, and border integrity.

But the status, health, and income of younger college graduates are shrinking. For example, a 2017 report in the New York Times declared:

Unemployment rates for STEM majors may be low, but not all of those with undergraduate degrees end up in their field of study — only 13 percent in life sciences and 17 percent in physical sciences, according to a 2013 National Science Foundation survey. Computer science is the only STEM field where more than half of graduates are employed in their field. 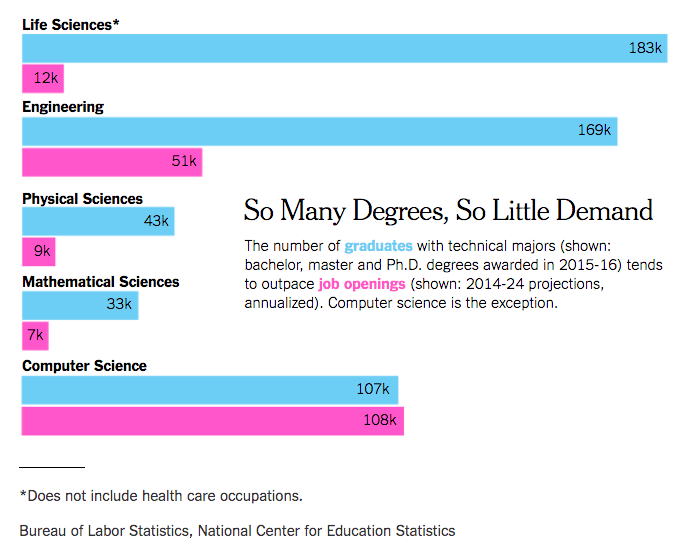 The massive career loss is indicated by federal income reports. “Families without a high school diploma saw a 9 percent increase in their median income, while families with a college degree saw a 2 percent decrease,” said a September 2020 report by the Federal Reserve banking system.

A plurality of Dem & liberal voters favor letting Fortune 500 CEOs import contract workers for the jobs needed by US college grads.
Everyone else opposes the outsourcing.
Swing voters oppose it by 66% to 22%.
GOP voters oppose it by 78% to 14% #H1B #OPThttps://t.co/2bLOfsw3bG

The January 20 draft of Biden’s bill showed multiple ways for Fortune 500 companies to increase their white-collar hiring from overseas. A copy of the updated bill is expected to be released on February 18.

In. Sec. 3102 (a), the bill doubles the award of green cards in the Employment-Based system by exempting spouses and children. This means companies can get 140,000 green cards each year to dangle in front of foreign graduates.

In Sec. 3401(a), the bill awards green cards to any foreign graduate who gets science and technology PhDs from American universities. Roughly 7,000 foreigners get PhDs each year, but if universities can sell tickets to citizenship, then many will likely develop new PhDs that allow foreigners to get PhDs after several years of work, study, and tuition. The number can be very large — roughly 136,000 foreign graduates were working in PhDs at American universities in 2019, according to the 2020 version of Open Doors, a government-backed report.

The bill also eliminates the pro-diversity country caps, which have helped to cause a huge backlog of Indian graduates who are working in U.S. jobs to get green cards.

In Sec. 3403, the bill adds 30,000 extra green cards per year for people without college degrees — such as laboratory workers, therapists, nurses, farmworkers, and dairy workers.

Establishment reporters have not covered the huge economic impact of migration on white-collar Americans, despite extensive coverage by mainstream publications.