The rising rates of suicides, drug overdoses, and other “Deaths of Despair” can spread from blue-collar white Americans to the broader group of poor Americans who hold low wage college degrees, says Angus Deaton, one of two professors who detected the post-2000 epidemic.

“Increasingly, people with a B.A. [degree] are being threatened by these things too,” Angus Deaton said in a May 4 interview by the Economic Policy Institute.

I thought [white working-class voters] did rebel by electing Donald Trump, I mean it’s in some sense they were a lot of people … they’re the people who have been done very badly over a long period of time. They don’t seem to be well represented … The Democratic Party seems to have abandoned working-class people, and you know it’s a form of an alliance between the educated elite and the [non-white] minorities … So we do need a political realignment, I think, which gets a real voice for working-class people again.

Since 2000, roughly 600,000 blue-collar white Americans have died as their traditional workplaces have shut down and their traditional civic supports– marriage, sports clubs, churches — have shriveled amid the loss of good jobs, said Deaton’s co-author, Anne Case.

The 600,000 blue-collars died from opioids, fentanyl, alcoholism, suicide, and other “Deaths of Despair,” while the death rates for college graduates remained flat, she said.

The death toll was smaller than the much-publicized 675,000 dead from AIDS from the 1980s, Princeton economics professors Deaton and Case write in their new book, Deaths of Despair. The toll, they write, “is the equivalent of three full 737 MAXs falling out of the sky every day [for three years], with no survivors.”

“We think that the long term labor market decline for less-educated workers has a lot to do with this story,” Case told EPI:

You need to go back all the way to the 1970s. We don’t think necessarily the [decline in] material welfare is the direct cause [of the deaths], but [it is the] lack of a stable job, a good job. It brings a loss of community, of marriage. of meaning and status in life, and we think it is those effects that … help us to better understand why these [economic changes] might lead to long term deaths from these causes.

Amid rising migration alongside the outsourcing of manufacturing jobs to China, Former President Barack Obama largely ignored the rising blue-collar death toll, according to a March 2019 report by the Washington Post, titled “The Fentanyl Failure.” The report concluded:

The decision was one in a series of missed opportunities, oversights and half-measures by federal officials who failed to grasp how quickly fentanyl was creating another — and far more fatal — wave of the opioid epidemic.

On Jan. 11, 2017, in the waning days of the administration, Obama delivered his annual National Drug Control Strategy to Congress. Four years after the epidemic began in Rhode Island, the White House called fentanyl a national crisis.

Since 2017, Trump has accelerated efforts to curb the fentanyl epidemic, and he has reduced the inflow of blue-collar illegal immigrants. The efforts have helped push up wages and employment for blue-collar Americans, and also to push down the drug deaths and to slow the suicide rates.

But Trump has not been able to boost salaries for lower-skilled college graduates, even before the coronavirus crash.

“We’re now seeing that wage stagnation and inequality trends are even impacting people with a bachelor degree,” said Thea Lee, EPI’s president told Case and Deaton. “Increasingly, recent college graduates are taking jobs that do not require a bachelor’s degree, and we also see when we look at the 10-year forecast from the Bureau of Labor Statistics that much of the new job creation doesn’t actually require a B.A.” 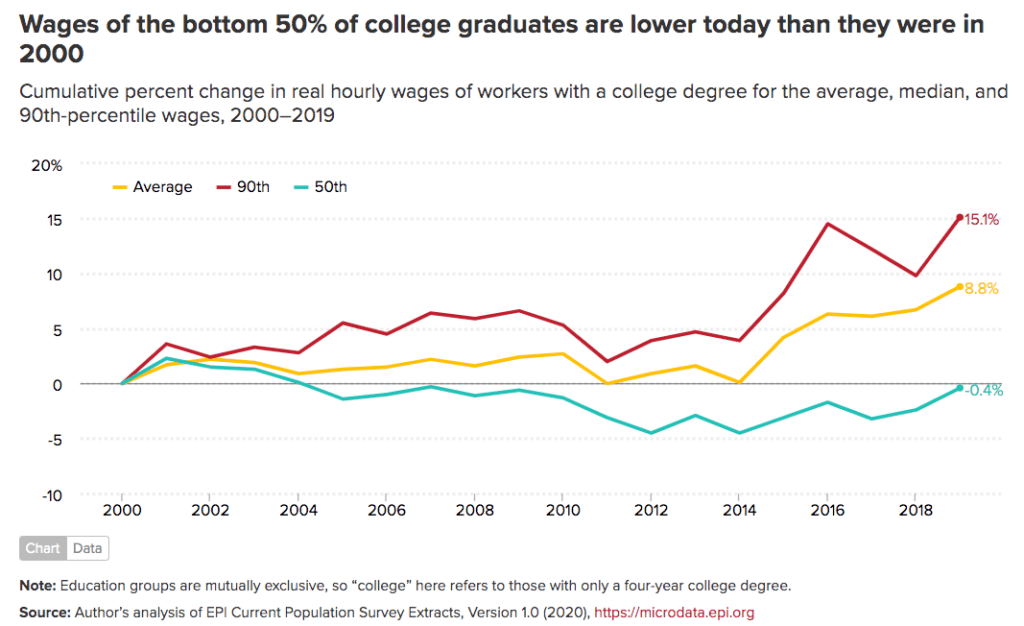 Salary levels for college graduates have been held down by a flood of roughly 1.5 million white-collar visa workers, including the approximately 900,000 H-1B workers who are resident in the United States.

Political pressure from native-born Americans and many legal immigrants is pushing President Donald Trump to gradually reduce the inflow of legal immigrants, even after he has successfully blocked large-scale illegal migration from Mexico. On April 22, Trump announced curbs on legal immigration and directed his agency chiefs to draw up plans for cutbacks to the visa worker programs by late May.

But many Fortune 500 companies and investors strongly back Congress’s policy of inflating the labor supply with migrants and visa workers. To block Trump, they have now launched a hard-nosed lobbying campaign and a soft-focus P.R. campaign in cooperation with various allies, including left-wing groups and former President George W. Bush. The campaign is also supported by Mike Bloomberg and by Facebook founder Mark Zuckerberg.

For example, Bloomberg’s media company uses the H-1B program to import many immigrant software experts and journalists. This inflow helps Bloomberg to minimize the payroll he offers to American graduates and journalists.

The coronavirus crash is helping to widen the growing gap between the Internet-using elites and the Americans who must work in shared spaces, Deaton said.

This educated elite like us, you know — we can sit at home and look into our Zoom screens all day, sheltered safely. We’re probably more productive than we’ve ever been. And we get paid. So the coronavirus] is certainly widening this gap between the people who were subject to deaths with despair [and] it’s not a white [only] problem here. I mean this is a problem for all working people.

EPI report shows how the Labor Dept. acts as a labor broker for 53,000 companies who import cheaper contract-worker graduates via the H-1B program.
The losers are US grads & families who see their salaries & careers converted into big Wall St gains#H1Bhttps://t.co/G2ivYxUcSs