Russia’s largest food retailer, X5, announced on Wednesday the official launch of a “pay with a glance” biometric self-checkout service that will be installed in up to 3,000 X5 supermarkets and convenience stores across Russia by the end of 2021.

X5 partnered with Russia’s state-owned Sberbank and the U.S. financial services company Visa to develop the facial recognition payment systems for use in X5’s Perekrestok grocery stores. After the payment system trialed successfully at 52 Perekrestok supermarkets, X5 greenlit the program for use across 150 Perekrestok supermarkets by the end of March. Several of X5’s Pyaterochka convenience stores in Moscow will install the biometric pay stations in April, according to Forbes. A “pay with a glance” purchase reportedly takes just a few seconds to complete; the service is currently available only to Sberbank clients.

“After scanning their shopping at an X5 self-service checkout, customers can select the option to pay through facial recognition,” the grocery retailer says. The customer is then instructed to look into a 3D camera installed at the checkout terminal. The camera scans the shopper’s biometric data to confirm his or her identity. A computer then charges the buyer’s Sberbank account for the purchase.

The customer’s biometric data is stored by Sberbank and “transmitted via secure channels in an encrypted form” to the self-checkout kiosk, according to X5. The 3D cameras used by the retailer have “high detection accuracy and depth capture, allowing for easy and quick facial recognition that takes into account a person’s height and changes in appearance.”

X5 stressed that “biometric data isn’t stored as an image or graphic but as an encrypted code, keeping people’s personal data secure. So if a system was to be hacked, the hacker would only uncover a set of encrypted data and not images or information.” 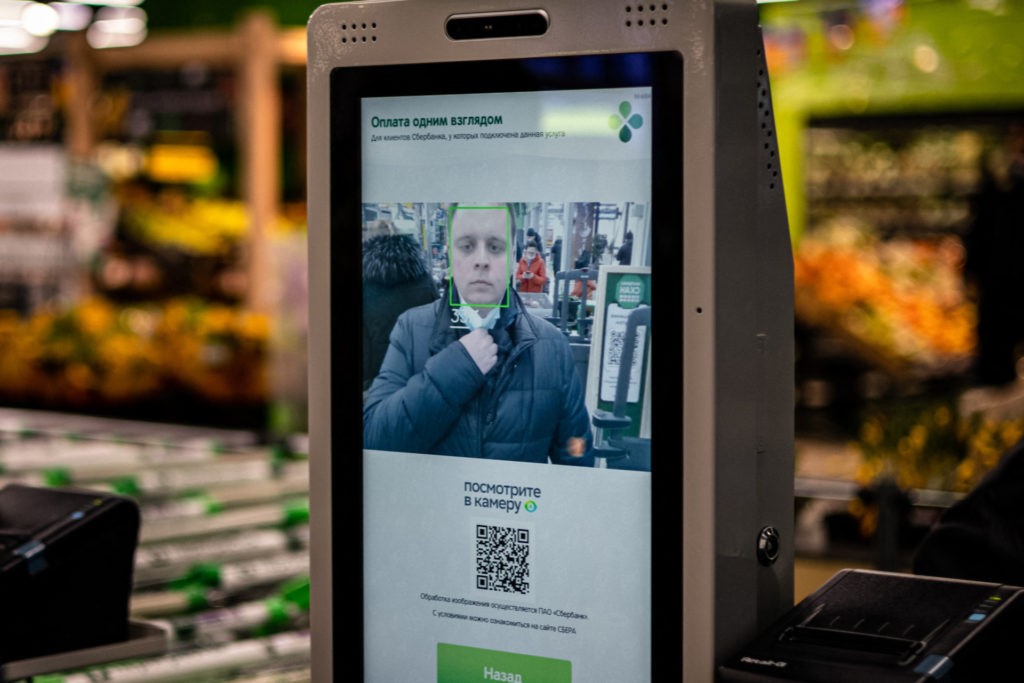 An X5 group representative demonstrates a facial recognition payment system at a self-checkout machine in a Perekrestok supermarket in Moscow. Russia’s X5 group, the country’s leading food retailer, has announced the launch of a facial recognition payment system, the latest expansion of a technology that has sparked privacy and security concerns. (DIMITAR DILKOFF/AFP via Getty Images)

The retail group further insisted that “no other companies working on this project have access to the biometric data.”

“You don’t need cash, bank cards, or smartphones to use the service – all you need to do is ‘present’ your face and the payment will be posted,” Igor Shekhterman, the CEO of X5 Retail Group, said on March 10.

“This is a fast, convenient and secure technology of the future, and we are among the first to be introducing it in Russia and worldwide. I’m convinced that contactless biometric payment solutions will very soon be used universally, and this payment method will become as customary as paying with a bank card or a smartphone,” he added.

Up to 1.3 billion people globally are expected to use digital wallets on their smartphones by 2023. Biometrics, such as face and hand recognition, are increasingly used to protect the security of digital wallet transactions. The method is considered one of the safest means of preventing identity fraud, as it is impossible to replicate or guess fingerprint or retina composition but fairly easy to guess or override pin codes and passwords. Biometric data storage comes with its own separate safety concerns, however, with many people uneasy about how the information is stored and shared by companies entrusted with its safekeeping.

“Paying via facial recognition devices is also available in some parts of the U.S., including Pasadena, California, where around 25 retail stores and restaurants adopted technology from PopID in August last year,” Forbes noted on Wednesday.