So much was said of Obama during the election, and for all of the promises of healing America’s divide, reaching across the aisle with a new kind of politics, creating new jobs and improving on “the failed policies of the last 8 years” I don’t see anything getting better. 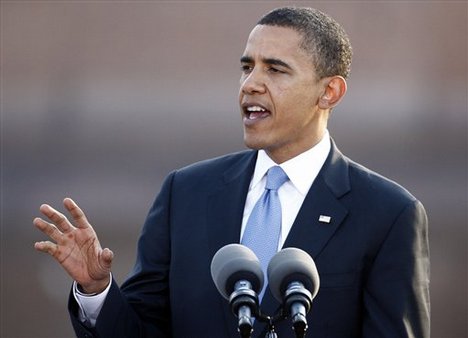 The shame for Bush’s whatever-he-did-every-day was palpable by the left. Ask your favorite lefty what Bush did right and they’ll likely only talk about his help with the Africa AIDS epidemic, and even then it was probably just to look good to all of those voters who are Africans with AIDS. They were ashamed of his Texas-ness, his swagger and for the first time we declared that “go-it-alone” wasn’t an American quality. Somehow, Kim Jong-il would be better under Obama. We would talk together, and he would listen. But Kim Jong-Ronery has upped his missile launches since Bush left office.

I’m still trying to figure out how Obama will blame Bush for the eventual missile attack on South Korea. The problem will not start with the Clinton administration, because we already learned from the college professors that bad things happened between 1980 and 1992, then nothing bad happened for 8 years. Then every evil in the world resumed between 2000 and 2008. I know we’re still not supposed to criticize the White House until the world’s longest 100 day honeymoon ends in 2012.

Given Obama’s failures, why does the left still feel a resounding victory just with Obama showing up? Because it was never about policies, given Obama’s speech to the Muslim world was so similar to Bush’s hand wringing that one wonders if they had the same speech-writer. We’re told that just Obama’s tone, his presence, his smooth leadership style is what makes the sale. But nothing is better with this president. Is this why he ran on Hope because that’s all I’m gonna get for four years?

I’m not impressed with his tone. I’d take great policies with horrible tone at this point. He reminds me of the Mommy-in-Chief promising to coddle every wound…real or perceived. He reaches out to apologize to Muslim countries I wasn’t aware we had sinned against. If anything, those governments should apologize to us for not being as great as America. Every country should apologize to their citizens for not being as great as this country.

The Bush/Cheney policy was classic hawkism–that it’s better to be feared than loved. But who fears President Obama? All he needs is a powdered wig to go along with the beauty mark. Sure, he had the balls to shoot a teenage Somali pirate in the face but does he have steel will where we really need it, to take out the Kim Jong-Il family in the middle of the night? What regime in the world today is evil enough for him to change it? Tehran? Darfur?

Elites get real tough on enemies that don’t actually look you in the eye. They can talk real tough against big bad climate change because he won’t speak against them and blow up their embassies. President Obama took no time in his address to the Muslim world (Really? To every Muslim in the world? Will you ever address the Christian world?) to directly oppose Ahmadinejad. This is the new tone we’re all so excited about. Cowardice. Nuance. In the end I think the left just didn’t like a cowboy in the White House…just like the last one they hated.

Bin Laden has released another tape, Russia expands influence both in China and Europe all of whom lick their lips that a Chicago lawyer who loves being photographed in a swimsuit Jesus’d his way into the most powerful leadership position in the world. Fine we have a new tone. That’s a victory of astounding trivia.