Though hailed as one at the time, the Beatles masterpiece Sergeant Pepper’s Lonely Hearts Club Band was not Rock’s first “concept” album. Per John Lennon: “It doesn’t go anywhere… It works, because we said it worked… Every other song could have been on any other album.” 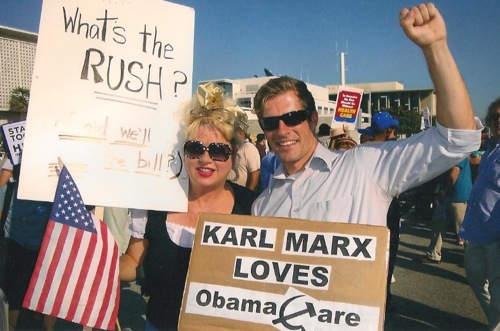 The album opens with the derivative 8-track era chestnut, With A Little Help from the Feds. Here, President Obama’s Lefty Health Club Band warbles that a radical bill must pass – now! – because our broken health care system is in crisis. Why? Because they said so. Yet, while concerned with rising costs, the vast majority of Americans believe our health care system is good or excellent, and they are satisfied with their current plans. Why then did Obama’s band try to rush release a radical bill before the public could hear how it impacts their current health care plans?

Next, Being for the Benefit of Mr. Marx, features President Obama’s Lefty Hearts Club Band screeching that health care is a right. Why? Because they said so. However, a cursory review of the U.S. Constitution finds no “right” to someone else’s hard-earned money and talents. Because we are a compassionate country, America provides a social safety net to the less fortunate with the consent of the governed. Thus, the government must not misuse this safety net to snare all Americans into the trap of socialized, government-run health care regardless of their situation and personal choice.

Seamlessly, the album segues into the “Great Society” homage, Lyndon in the Sky on Steroids, wherein President Obama’s Lefty Health Club Band bellow that only a government run health care schemes’ massive intrusion into the free-market can lower costs, increase quality and expand choices. Why? Because they said so. (Stop laughing. They’re serious.) Nonetheless, much of the current crisis stems from government waste, fraud and abuse; and the costs of presently underfunded government health care programs are passed on to the bills of the privately insured. Further, the outstanding liabilities of Medicare and Medicaid already stand in the trillions before Obama care’s nearly half a trillion dollar Medicare cut. Does anyone in the sane center of American politics believe a third government-run health care program will fare better, let alone fix the other two programs? No. By focusing on “cost control” (i.e. rationing), the government will cut the supply of health care while inflating costs by pumping more public money into the system; thus, costs will increase, and quality and choices will decrease by government fiat and design.

Next up, Digging a Hole highlights President Obama’s Lefty Health Club Band crooning that only the radical intrusion of a government-run health care plan can fix our economy. Why? Because they said so. This does not bear statistical scrutiny. Over the years of rising health care costs, America’s economy has still grown. Yes, everyone wants lower health care costs; however, this does not mean that absent government rationing of care the entire American economy will collapse. In fact, we know government-run health care will add trillions in new spending to the federal deficit and debt; compel higher taxes on working families to “pay” for it; increase health care costs; reduce the quality of and choices within the health care system; and harm the American economy.

On the album’s closing medley, Good Moaning, Good Moaning/Getting Bitter/A Bray in the Strife, President Obama’s Lefty Health Club Band barks that all opposition to their radical health care bill is politically manufactured and motivated to preserve the status quo. Why? Because they said so. Still, remembering that the Left ascribes its own sins to opponents, it is actually the White House and Congressional Democrats that support the status quo of big government – unless they deem making it even bigger and more intrusive as “hope” and “change.” It is they who cut the deals with special interests to secure supportive media assaults for their radical health care scheme and, with the complicity of the Democratic National Committee, unleashed their own political astroturfers on elected officials and members of the public opposed to it. Stunned by the spontaneous reaction of grassroots organizations that existed prior to this bill, the administration and its blank check Congress intensified their smear campaign against their opponents, perversely sinking to the gutter tactics of calling them “un-American” and accusing them of waving swastika covered flags. True, these grassroots opponents must more clearly, civilly and diversely make their voices heard; however, they are not the cause of disorder but a symptom. The root of the moment’s madness is President Obama’s Lefty Health Club Band’s forcing their radical “concept” of health care reform on unwilling Americans. Tone deaf to the times and public sentiment, the President is not above the fray. He is directing it to foist a fossilized, 1970’s industrial-welfare state model governance on Americans’ health care, despite our globalized market place that empowers citizens and consumers.

For the less fortunate and most vulnerable amongst us, there must be an expansion of Federally Qualified Health Clinics, which will provide patients with preventive and routine treatment; end underserved people’s use of emergency rooms for primary health care treatments. Doctors and other health care professionals can be incentivized to provide their services at these clinics for either immediate or future considerations; and a “Project Navigator” program attached to each FQHC can assist the underserved in accessing the health care system. This approach is community based and will stand a greater chance of over time building true, community-based health care and empowering consumers, rather than continuing in perpetuity as dependents upon a government service. Finally, people suffering from “orphan diseases” – rare afflictions requiring a lifetime of special care – should be compassionately assisted through our nation’s social safety net.

Of course, such ideas are muted beneath the present political circus’ din; however, one true note rings out: on A Health Dirge Night, President Obama’s Lefty Hearts Club Band’s radical “concept” of health care reform “doesn’t go anywhere,” except down the tracks of higher costs, lower quality, fewer choices and lost jobs; its stale redistributionist tenets could fit on any nineteenth century socialist handbill; and, no matter how vehemently they says otherwise, it isn’t needed by and won’t work for Americans.