While Bush was busy taking care of his base and professing his love for our troops, he proposed cutting combat soldiers’ pay by 33% and assistance to their families by 60%.

Writer/director Michael Moore’s paranoid pack of audaciously demagogic lies dropped on the world in the heat of an American presidential election and an ongoing war in Iraq. Just for starters, the film says outright or insinuates that Iraq under Saddam was some sort of paradise, George W. Bush won the presidency in 2000 after thousands of black people weren’t allowed to vote, Bush covered up for the bin Laden family after the 9/11 attacks, and the Bush family’s friendship and business ties in the Middle East were a large part of the motivation behind waging war in Iraq and Afghanistan. After that, fill in your own blanks using the left’s greatest crazy hits: Diebold, Halliburton, WMD, Mission Accomplished, “My Pet Goat,” and then wrap it all in the hard candy shell of a whole lot of troop-bashing through the insidious use of anecdotal evidence.

No wonder Moore received a 20 minute standing ovation at Cannes. 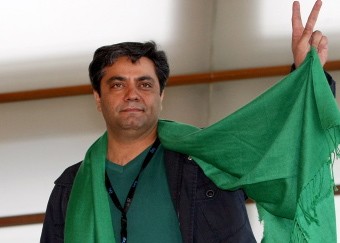 It was the summer of 2004 and for argument’s sake let’s say that Moore attacking a sitting president with provable lies is the price of an open democracy. However… Let us never forget that in 2004 Iraq was a country where the civilian population had already turned out to vote (under a very real threat of violence and at a percentage higher than our own presidential election) for the American plan of self-governance. Therefore, and I don’t say this lightly, Moore’s calculated use of the awesome power of cinematic sound and fury to undermine the war was an act of outright evil. In fact, I have no doubt that Moore is so morally twisted that when Osama bin Laden seemed to quote “Fahrenheit 9/11” in a video dropped just days before the 2004 presidential election, the Oscar-winner took some pride in the recognition.

For those of you who haven’t seen today’s pick, imagine a film widely released next year into 868 theatres that receives overwhelming critical praise, grosses an astonishing $222 million, receives all kinds of awards love (Moore’s unquenchable ego screwed his own Oscar chances),and all kinds of mainstream political support, but… Puts forth the theory that President Obama is a Manchurian candidate — a foreign-born Muslim terrorist-sympathizer in league with the likes of Bill Ayers and Louis Farrakhan to bring down the United States from within.

That’s what a “Fahrenheit 9/11” equivalent would look like today.

Except that the same vermin who gushed over Moore’s stridently obvious anti-American/anti-Bush lies, the same elites who found thoughtful an unforgivable piece of propaganda and character assassination based on what barely qualifies as innuendo, would scream bloody murder today. Furthermore, there’s simply no way any kind of documentary attacking Obama in the same scurrilous way would make even a tenth of the “Fahrenheit 9/11” box office. Unlike Leftists, most conservatives don’t have some barren hole in their humanity impossible to fill and that forces them reach out to the likes of a Michael Moore for comfort and affirmation.

Thankfully, while a landmark piece of documentary filmmaking, like everything else touched by the diseased soul of Mrs. Moore’s baby boy, “Fahrenheit 9/11” was an abject failure in the arena where it most wanted to succeed: in bringing down George W. Bush, embarrassing the United States, and ushering in a holocaust upon 25 million innocent Iraqis.

In the end, “Fahrenheit 9/11” only appealed to those who already hated the President and might have actually helped Bush by stirring up voters on his side. By the time the dust settled, Bush not only won a second term that allowed him to double down in Iraq and win the day, but what sweet irony that we now have the most liberal President ever carrying on in Iraq and Afghanistan as though Bush never left.

Not being a film writer at the time, it was only after the 2004 election, only after the feckless John Kerry was safely placed back in the Senate and George W. Bush back in the White House, that I decided to stomach a look at “Fahrenheit 9/11.” The post-election schadenfreude factor seemed the only way to tolerate what I already knew was Leni Riefenstahl-lite. The end result was that the two hours that followed were everything I expected politically, but cinematically I was blown completely away.

There are very few documentaries (even those I like) that feel like bona fide cinema. Most feel like “60 Minutes” segments stretched to 90 minutes. There are notable exceptions, but those exceptions prove the rule. This doesn’t mean that these documentaries aren’t important, well-crafted, or impactful. But it’s just a fact that the Academy has nominated and handed Oscars to documentary filmmakers whose work would seem more at home on the Discovery or History Channel than up on the big screen.

Michael Moore sucks at persuasion, but the man knows how to put on a show and for the entire 121-minutes I was completely caught up and thoroughly entertained by the paranoid fantasies and byzantine conspiracy theories that command the synapses of a non-thinking, left-wing mind driven only by hate, prejudice and emotion. And I was moved, as well. The story of Lila Lipscomb, the woman who lost her son in Iraq and the very real rawness of her anguish, is unforgettable.

And it’s this kind of footage that separates Moore from many of his counterparts. Somehow, Moore finds footage most of us have never seen, even of big events we’re already familiar with. And while the context of this footage is always manipulated, we’re glued to it because it’s brand new.

The second key to “Fahrenheit’s” success is its perfectly seamless structure. When it comes to the classic three-act structure, documentary films are no less a slave to it than narratives. The problem for many documentary filmmakers, though, is that not everything in real life contains the necessary crisis point at the end of act two followed by a third-act triumph. In many cases, directors are forced to manipulate these moments into being, last year’s Oscar-winner “The Cove,” being a perfect example. In that wildly overrated save-the-dolphins screed the third act triumph was cast and crew congratulating themselves over the secret footage they filmed.

In “Fahrenheit” you neither see, sense, or feel any of the structural gears turn, an achievement few narrative films match as effectively.

Finally, you cannot overstate the lasting impact of Moore’s blockbuster. Though I doubt it’s the legacy he was hoping for.

For starters, “Fahrenheit 9/11” inspired legions of filmmakers, including some very good ones, to get into the business of documentary filmmaking. Best of all, many of these newcomers are conservatives who might not have otherwise considered such a thing had the double-shot of Moore’s lies and success not motivated them. For the first time since the Left grabbed the levers of power in Hollywood we now have a grassroots movement of pro-American, pro-liberty filmmakers learning through doing the difficult and painstaking process of telling stories though picture and sound. The fruits of this labor have only begun to bloom.

“Fahrenheit 9/11” is also the Godfather of a Supreme Court case the left hates more than any other in recent memory, Citizens United v. Federal Election Commission — a landmark decision in favor of free speech that all but overturned McCain-Feingold. Citizens United, led by David Bossie, got into the documentary filmmaking business with 2004’s “Celsius 41.11,” a direct rebuttal to “Fahrenheit 9/11.” The success of that film led to others, including “Hillary: The Movie,” which was the impetus for the Supreme Court case after the FEC refused to allow Citizens to advertise the film on television, claiming it violated McCain-Feingold.

So, please, while you’re chuckling with the taste of irony in your mouth, feel free draw a straight line from “Fahrenheit 9/11” to a Supreme Court decision so loathed by the left that it led to President Obama chastising the Supreme Court and embarrassing himself over it during the last State of the Union address. Without “Fahrenheit 9/11” the appallingly unconstitutional McCain-Feingold might still be the law of the land.

Finally, I had originally intended to place Moore’s film in the top 10, but watching it again over the weekend brought the realization that it is very much a product of its time — of what was happening in 2004 — and lacks the bigger themes necessary to have a timeless impact. What struck like a lightning bolt six years ago still plays perfectly well, but lacks urgency and relevance; a problem that will only get worse as the years pass.

Hopefully the very fact that I’m compiling this list means that I can criticize the quality of some left-wing films without being accused of slamming them for political reasons. The following just weren’t good enough to rank in the Top 25:

Philadelphia (1993): Tom Hanks is impressive and won his first of two consecutive Best Actor Oscars playing an AIDS sufferer whose dying act is bringing a discrimination lawsuit against the big corporate law firm that fired him after discovering his illness. Denzel Washington is even better as the homophobic ambulance-chasing trial lawyer who takes his case. Unfortunately, neither is good enough to salvage the film as a whole. Director Jonathan Demme gives us a too-good-to-be-true protagonist with a too-good-to-be-true family, a number of obnoxiously self-conscious camera moves, and a story that starts out strong but eventually devolves into a preachy, shallow afterschool special.

As someone who was sympathetic to ACT UP, a militant (and frequently stupid) AIDS advocacy group that was tireless about moving the government to fund AIDS research and, most importantly, pushing, for access to experimental drugs like AZT, the overall message of “Philadelphia” didn’t strike me as partisan. But the film’s pieces, the cigar-smoking rich white bad guys, and the like, all reek of liberal piety. And it’s just not a very good movie.

Bulworth (1998): Warren Beatty plays the title character, a sitting United States Senator just a few days away from losing to his Democratic opponent in the California primary. Despondent, he arranges for his own assassination and suddenly finds himself liberated and unafraid to speak his mind. Beatty directed and came up with the story, the problem is that what sounds like an intriguing concept quickly wears thin and then disappears altogether as Beatty confuses talking the same nonsense Democrats always talk as something new and brave. Even in 1998, liberals were railing against health insurance companies, corporate media and the like — so what’s the big deal again?

NOTE: Today on Big Hollywood we praised George Clooney, Barbra Streisand, ACT UP and “Fahrenheit 9/11.” Let this be remembered as our Day of the Apostasy.