“The Hunger Games” is infinitely better than any of the “Twilight” films.

Let’s all take a deep breath and say, “thank you.”

“Games,” based on the wildly popular teen novels by Suzanne Collins, trumps that vampire franchise with superior acting, absorbing themes and a mature brand of science fiction fantasy. The fact that the film targets an all-powerful government enslaving its citizens gives it even extra heft for right-of-center audiences.

Yet those unsightly tween narratives keep breaking through, transforming what might have been a superlative sci-fi installment into an intermittently enthralling film.

Jennifer Lawrence of “Winter’s Bone” fame stars as Katniss Everdeen, a scrappy teen living in the impoverished community known as District 12. “Games” is set in the near future, a time when some generic calamity wiped out America as we know it and replaced it with an upper crust society lording over a series of poor districts.

The back story is vague and unsatisfying, but it’s not mandatory to have all the blanks filled in. It’s also part of the movie’s mission not to whack us with an ideological cudgel. In “The Hunger Games,” story comes first, even if it’s hard not to notice a nanny state which thinks its citizens should bow down and thank them for their very survival.

That government, headquartered in a tony capitol dripping with excess, holds an annual event called The Hunger Games meant to remind the districts they were smited years ago when they tried to overthrow the government.

The Games invites – as if said invite could be declined – two young members of each District to compete in a battle to the death.

When Katniss’ young sister is chosen to represent District 12, Katniss volunteers to take her place, something that doesn’t happen often for obvious reasons.

So Katniss is prepped for battle along with Peeta Mellark (Josh Hutcherson), a fellow District 12 denizen who harbors a secret sure to spice up the film’s mid-section.

Katniss and Peeta meet a gaggle of government reps, including a wonderfully conflicted Woody Harrelson as a former winner, who try to prepare them for the battle ahead. And then there’s Effie Trinket (Elizabeth Banks), a Hunger Games announcer who looks like she stepped out a Tim Burton film.

So do the rest of the Capitol dwellers, the film’s most intriguing contribution to the post-apocalyptic film genre. The citizens live as if they entered a Halloween costume ball that never ends. The rich swish around in fancy dresses and outlandish hairstyles, so bored with their creature comforts they’re left to innovate styles to amuse themselves – and us.

Director Gary Ross (“Seabiscuit”) takes his mission to adapt the book series seriously, even if he’s obligated to introduce a passion-free romance and some hackneyed plot devices.

Could this be the end for Katniss? Just wait, at the very last second someone or something will appear out of thin air to save the day. 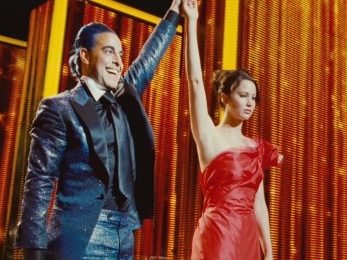 Mocking reality television falls into the Fish, Meet Barrel category, but “The Hunger Games” trashes this TV genre with a heady mix of humor and horror. Stanley Tucci radiates smarm as the talk show host who introduces the Hunger Games players to the nation, merging the cynicism of David Letterman with the lowest common denominator shtick of Jay Leno.

Lawrence makes Katniss a weary warrior, someone forced to assume the role of matriarch in her family, a subplot given skimpy screen time. She’s as bold as Hutcherson is bland, and the film sags when we’re forced to root for them as a dynamic duo.

The film’s PG-13 rating is tested when the Games commence, a masterfully calibrated sequence where violence is framed, and camouflaged, in a way that’s even more jarring than any R-rated film. “The Hunger Games” holds back on any overbearing soundtrack, letting many critical moments unfold without musical accompaniment. It’s a simple but welcome tool to keep us engaged.

“The Hunger Games” ends with an obvious nod to the stories left to tell, but the uninspired final moments of the Games themselves and the wan romance afoot could mean the first installment will remain the best.

If so, then let’s relish a smart, sophisticated story aimed primarily at teens but told with a passion anyone can savor.