Phoenix ComiCon was blown away on Friday night with the ultimate fan project for any Star Trek junkie: ‘Star Trek Continues.’ The cast includes Trek superfans Vic Mignogna, a prolific voice actor who played “Captain Kirk,” Grant Imahara of “Mythbusters” as “Sulu” and Chris Doohan, son of the original “Scotty” playing his father’s role. The highly polished webseries debuted its first episode to thousands (close to 4,000, according to the ‘Continues’ Facebook page) of Trek fans in the packed main ballroom.

“Fan project” and “quality” are not always related terms in the entertainment world — especially in the scifi genre. However, this “fan project” put on by industry professionals and superfans delivered a stunningly beautiful product with an almost seamless continuation from the old series to present day.

The premise of the series is based on the original 5-year voyage. The original series ended three years into the journey. Vic and his team are starting this new series right where the original left off.

This new series is being brought to you in partnership with Farragut Films and DracoGen Investments – creators of the award-winning web series, Starship Farragut. The series is being shot in the original 4:3 format to keep the authenticity of the framing of the original series. It is very important to us that we provide a quality show and ancillary products, such as our website. Website development is provided in association with Stupidcat.com.

Being a very sentimental Trek fan, I had serious doubts a project that in just about every respect done outside of Hollywood could recreate the original magic, endearing cheesiness and other intangible components that makes the Trek story captivating. Along with the rest of Phoenix ComiCon, as soon as the episode debuted, my eyes didn’t move from the screen for the hour-long ride.

To give you a small idea of how much the actors are fans of all things Trek: Mignogna revealed that as a child he would record the original ‘Star Trek’ episodes on cassette tape and then place a cassette player under his pillow so he could re-listen to the episode as he went to sleep. In other words, he pretty much memorized every episode. Larry Nemecek, a fellow Oklahoman who played “Dr. McCoy,” is well known to the Trek community for his numerous appearances in Trek documentaries and is a world-wide convention speaker on Trek topics. 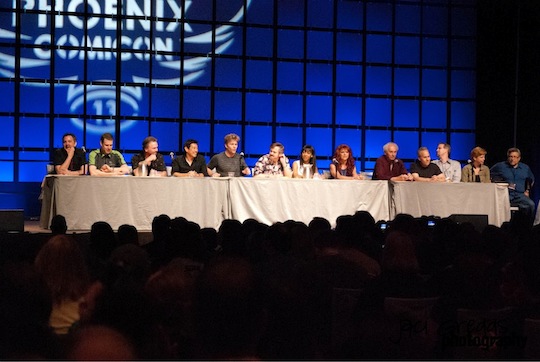 In the Q&A portion of the ‘Continues’ panel, the cast revealed they have built a full replica of the “Enterprise” soundstage in Georgia with the help of a fantastic crew. The special effects used during ‘Continues’ keeps with the exact period of the original filming along with countless other small touches that make this series undeniably Trek. The incredible music accompanying the webseries pilot definitely elevated the episode to the next level in quality and authenticity. Many familiar Trek musical themes moved throughout the sometimes overly-cheesy dialogue (which is, of course, authentically Trek) to create a genuinely original Trek feel. Mignogna revealed that he composed the music for the episode in the far-too-short Q&A which was cut off by ComiCon organizers to clear the room for Wil Wheaton’s “Awesome Hour.”

The entire cast and crew followed their debut panel by sitting for several hours to hand out posters and sign autographs for free. I heard organizers give an estimate that over 600 people were in line. The cast seemed overwhelmed by the response of fans who waited for two hours to have a few words and grab a signature. From my observation and discussion with the cast, they considered this project a labor of love and simply wanted to share their fandom with the rest of the Trek fan world. “We’re not making any money off of this,” Mignogna said multiple times during the panel.

If there was one takeaway from the pilot episode and debut panel, it was that there was a lot of love put into this project.

Check out the first episode below, which includes special guest star Michael Forest returning as “Apollo!” You can also watch it on the ‘Star Trek Continues‘ official site: