Whether politically motivated or just looking for an intriguing tagline, the History Channel’s claim that “World War I made Stalin a man and World War II made him a tyrant” is absolutely, 100% factually wrong in every which-around-way you want to look at it.

Yes, Stalin had been a tyrant for nearly four decades before the war, but it is also a fact that Stalin was a “man” long before World War I and — how’s this for irony — Uncle Joe was at his least tyrannical during World War II. 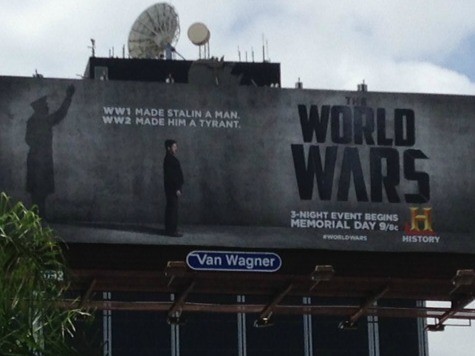 My colleague Christian Toto lays out the facts proving Stalin was a tyrant long before WWII. I can only add to that, that in 1924 he assumed complete power from another tyrant, Vladmir Lenin, and did so using murder, torture, and terror as political weapons (ask Trotsky if Stalin was a tyrant before the war).

Moreover, Stalin was almost always a gangster, a role he embraced after deciding there was no God. At the age of 21, around the turn of the Century, Stalin left — believe it or not — the seminary and joined Lenin’s Revolution as a brutal enforcer and bank robber.

I don’t want to come off as praising Stalin, but the idea that he didn’t become a “man” until WWI is simply absurd. To begin with, Ioseb Besarionis dze Jughashvili was in his late thirties when the first World War broke out. By that time “Koba” was already well-respected (and feared) within the ranks of his fellow Bolsheviks as an organizer of men, thief, intellectual, and even a poet. He was second only to Lenin in rank but still had the authority to order assassinations, which he did without hesitation.

Moreover, by the time WWI broke out, Stalin was already a remarried widower with a son.

Stalin might not have been a man in the good sense, but by 1911, years before the war, Stalin was already the “man” he would be forever after.

WWI had nothing to do with making Stalin who he was.

The real irony in the History Channel’s anti-science tagline is the claim that World War II “made Stalin a tyrant.” Forget the fact that Stalin had already been a mass-murdering tyrant for going on forty years and that no one “made” Stalin a tyrant but Stalin, the truth is actually the exact opposite. This isn’t well known, and the History Channel is probably counting on that, but during World War II Stalin was at his least tyrannical.

During the war, the few hundred Christian churches The Party hadn’t already leveled (there were over 50,000 when the Communists assumed power) were allowed to re-open. In the decade before the war, the man the History Channel claims wasn’t yet a tyrant, had been on a rampage to extinguish all religion and persecute the religious. Opening the churches was a complete turnabout.

Moreover, during WWII, Stalin encouraged patriotism instead of squashing it (with murder and Gulags) as nationalism — which Communists consider a threat to devotion to The State, or central government.

Finally, what is now known as The Great Terror (or the purges, show trials) was put on hold — which gave the people some room to breathe and move, instead of having to behave like robots to stay off the radar of the Secret Police.

The Soviet peoples were never freer under Stalin than during the war.

Stalin was no sweetheart, and the freedoms he allowed were only to serve the mercenary purpose of defeating Hitler, but the truth is in fact the complete opposite of what the History Channel’s advertising says.

For the record, after WWII, Stalin went right back to being Stalin. Until his death in 1953, he worked feverishly to extinguish those he felt were poisoned and corrupted by his liberalities during WWII, especially Jews.

Somewhere around the turn of the century, from the day he turned his back on God and chose to follow  Lenin, Marx, and communism, Stalin was a tyrant, a full-blown monster, a mass-murderer on a level that made Hitler look JV.

Maybe nobody told The History Channel that since the fall of the Soviet Union, the Russian government has opened its wealth of archives to the public, including historians. Let me suggest a few of them (my sources for this piece):

Simon Sebag Montefiore’s “Young Stalin” and “Stalin: The Court of the Red Tsar.”