Rosie O’Donnell, an outspoken critic of Israeli military action against Hamas, was reportedly selling custom art of her perspective on the Israel-Palestinian Conflict.

The longtime co-host of The View created 30 pieces of “limited edition” art, in a collection she titled “Israel Begins Bombing Gaza.”

In the “art” category of rosie.com, O’Donnell pitched her work with a description of her creations. However, they were removed Friday.

The original post featured an image of a man carrying a child, captioned, “This man carries a baby about the same age as the one I sit next to, watching Frozen.”

According to a report from Israellycool, the photo O’Donnell was using for her art didn’t take place in Gaza, but is a Getty Images picture, taken in Northern Syria of an emergency response volunteer carrying a child wounded during a Syrian government attack.

O’Donnell used the same photo in a second piece of artwork, titled “Stop and Think.”

The second design depicted an airplane set behind the man carrying the child.

Friday, the art on Rosie’s site was taken down after the comedienne faced a backlash on Twitter, reports Newsmax. 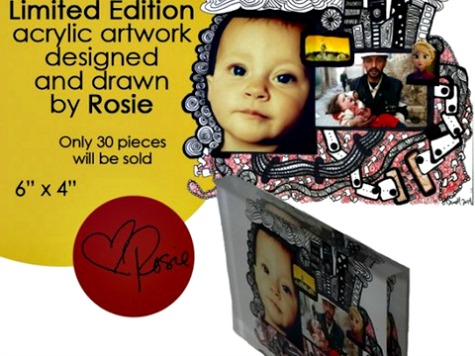