Midwives in the city of Leeds have been warned to book their annual holiday leave now, as a baby boom is expected this fall, nine months after the release of Fifty Shades of Grey, reports the The Daily Mail. 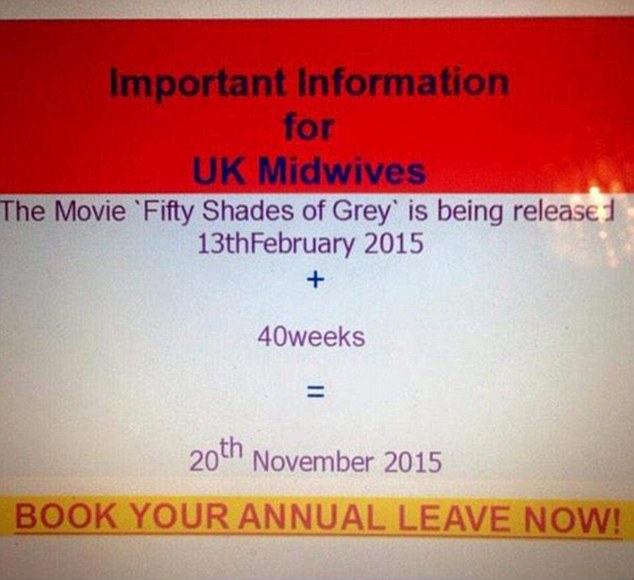 Midwives are trained professionals with expertise and skills in supporting women to maintain healthy pregnancies and have optimal births and recoveries during the postpartum period, according to the Midwives Alliance of North America.

A student midwife also took to Twitter to raise awareness for the potential baby boom.
“Warning to all #Midwives and #StudentMidwives, Fifty Shades is going to keep us busy,” wrote the unidentified student.

The signs are believed to have been posted on Feb. 12, the day before Fifty Shades hit theaters. The Sun reports the notice was first seen in Leeds at St James’s University Hospital.

The film is an adaptation of EL James’ trilogy, which was released four years ago and has sold more than 100 million copies worldwide. The film has now taken in around $559 million since its global debut.

There were previous claims that the book would spark a similar baby boom in 2012, but those predictions were debunked when data revealed births actually fell 4 percent the following year.

But, hey, it’s better to be safe than sorry.