The production had faced obstacles in getting to the stage. Earlier this month, Mic writer Kevin O’Keeffe described it as being “like a powder keg ready to reignite racial tensions.” And just last week, eight members of the play’s 13-member cast walked out on the production after reading the script. 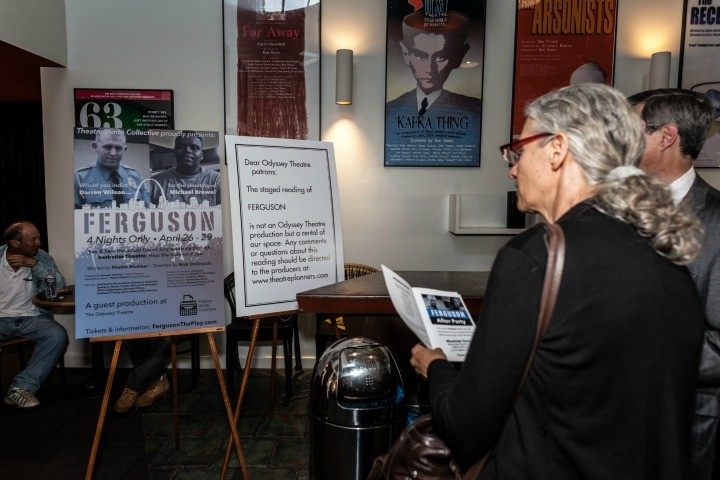 A sign posted just inside the doors at the Odyssey Theater reminded patrons that Ferguson was not a production of the theater itself but a rental of the space, and asked that viewers with comments or questions contact the show’s producers directly.

Yet there were no signs of trouble at the show’s premiere Sunday night. The 90-minute no-intermission production began predictably enough, with an audio recording of sirens, footsteps and a frantic phone call to police played over the auditorium’s speakers. The actors stood silently, arms at their sides, until the recording ended and the show began.

The actor playing prosecuting attorney Robert McCulloch spoke to the audience as though they were the grand jury, reading off a list of instructions as if the proceedings were real. Then the actresses playing attorneys Sheila Whirley and Kathi Alizadeh took over, grilling witnesses and generally setting the pace.

The play incorporated a number of actual images and videos presented to the grand jury, projected on the wall behind the performers. At one point, the surveillance video of Brown taking a box of cigars from a convenience store was played while Dorian Johnson narrated with the corresponding testimony. Images of Officer Wilson’s firearm and an aerial shot of the street where Brown was killed were also displayed. 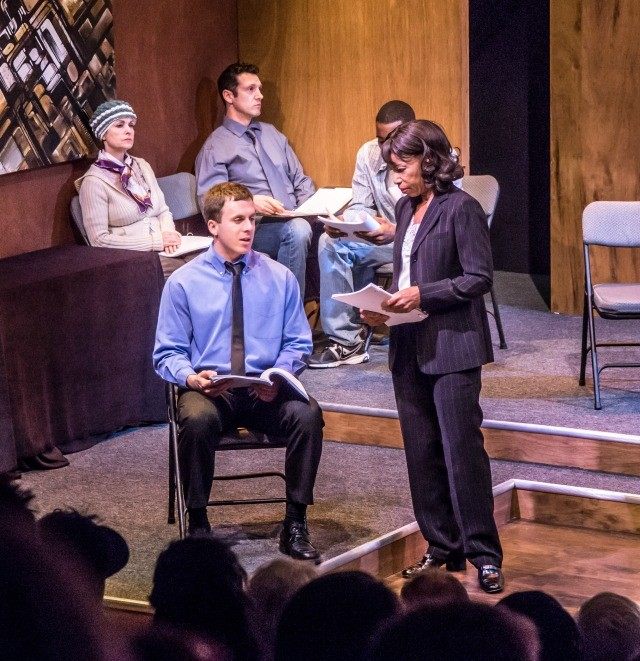 The production wasn’t without hiccups; because the play relies exclusively on exact grand jury transcripts for its script, the lengthy testimony at times proved challenging for many of the actors to recite naturally. All of the actors onstage carried a copy of the script, a believable conceit in a courtroom setting but nonetheless slightly distracting.

Many of the actors involved in the production had only had a copy of the script for 48 hours before curtain time. Brian A. Goldreich, who played police officer Darren Wilson, said his agent had called him on Friday with the offer.

Still, Goldreich and Onrico Nightingale, who played a witness discredited by an FBI agent, seemed to glance down at their papers only sparingly, despite the short amount of time they had to learn the material.

“We were unsure of how it would come out, because it’s such a touchy subject,” said Nightingale. “But when I heard that applause, I knew it was good.” 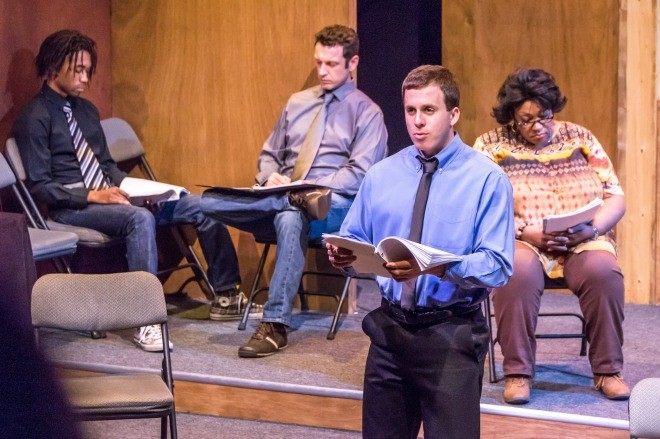 Just four of the original cast members had stayed with the production from beginning to end. One of them was Charles McCoy, who played Dorian Johnson. McCoy was electric as he delivered the emotional testimony of Johnson, a close friend of Brown’s who was with him at the time of death.

The difference in accounts of the shooting between Wilson and Johnson provides much of the dramatic heft of the play. Some of the material was familiar from media accounts of the grand jury proceedings, like Johnson’s later discredited claim that Brown never reached into Wilson’s car to go after his gun, or Wilson saying Brown looked like a “demon” as he attacked the officer.

Less familiar was the play-ending testimony of another eyewitness, played by Sydney A. Mason.

Before some of the original cast members quit, they had petitioned McAleer to include other accounts in the play more sympathetic to Brown. One former cast member, before quitting, said that nobody knows the truth of what happened that day, and “everybody’s truth is subjective.”

McAleer appeared to address these criticisms in the back of the play’s program, in a “note from the writer.”

“The truth cannot be balanced or subjective,” the playwright wrote. “Unfortunately or fortunately, the truth is often pointed and uncomfortable. The truth frequently appears to be unbalanced because it cannot change due to pressures or threats or pleadings. That is how it should be.”

After the show ended, the cast, crew, and some audience members headed to a nearby bar to decompress, have a drink and discuss the play.

“It came out better [than I hoped],” McAleer said.