Katy Perry unknowingly made a divisive political statement while performing in the Taiwanese capital of Taipei Tuesday.

The pop singer draped the national flag of the Republic of China, Taiwan’s flag, around her neck like a cape and wore a dress embellished with sunflowers.

While nothing out of the norm for Perry, as she’s been using sunflowers as a common fixture in her performances since the beginning of her “Prism” tour in October 2013, some interpreted the outfit politically.

For many, the get-up served as a reference to a student-led protest last year, called the “Sunflower Movement,” in which thousands of Taiwanese citizens congregated around the nation’s legislature for several weeks to oppose a trade deal with mainland China.

Perry’s look supported Taiwan’s independence from China, as the sunflowers symbolize the aforementioned anti-China protests, according to some.

Perry’s Taiwanese fans (who call her “Fruit Sister”) were quick to turn to Sina, the country’s version of Twitter, to discuss the incident.

Some media outlets and local fans praised the singer, with one saying “Have never loved @katyperry more than this moment. Wearing the Taiwan Republic flag on stage,” via Yahoo News.

“Singing with a national flag of the Republic of China. So moving,” blogged another overseas fan.

To the contrary, mainland media outlets have been less than supportive of the dress, and are now calling the singer out for being late for the concert.

“I’m speechless over Fruit Sister. I suppose she has no chance to come to the mainland anymore, though she might not care. These performers who intervene in other countries’ politics are the most annoying,” wrote a user who was upset by the interpreted statement.

According to Taiwan’s Epoch Times, images of Perry wearing the Taiwanese flag were removed by Chinese Internet sensors the morning after the concert.

Beijing is known for censoring celebrities who get involved in Chinese politics. According to CNBC, local celebrities who participated in “Occupy Central” protests in Hong Kong last year were given the boot and can no longer perform on the mainland.

Perry remains on schedule to perform in Macau this weekend. 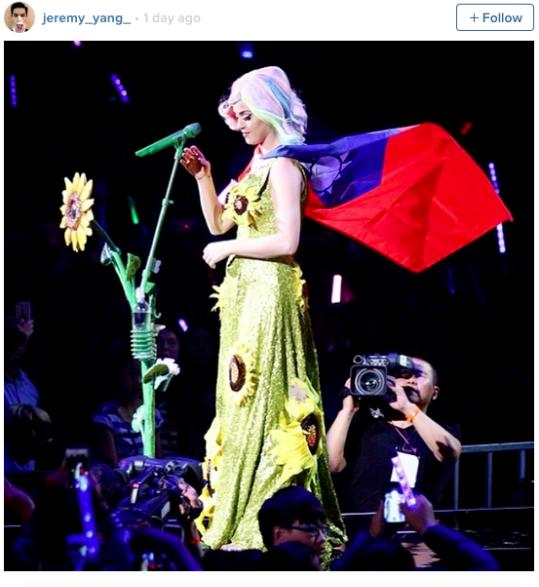