The online culture wars have moved out of comments sections and into Amazon’s Kindle Store.

Following the publication of a book by the controversial sci-fi author Theodore Beale aka Vox Day, two parody e-books surged to the top of the store’s top-100 rankings. The first book was a parody of Day’s work, while the other (which has now been removed from Amazon) mocked John Scalzi, one of Day’s critics.

Day’s book is entitled “SJWs Always Lie: Taking Down the Thought Police”, and is intended to be a serious polemic. The book’s summary describes SJWs (Social Justice Warriors — a term for authoritarian progressive activists) as having “plagued mankind for 150 years” and describes how they “invaded one institution of the cultural high ground after another.” It presents itself as a guide to “understanding, anticipating, and surviving SJW attacks.”

The book includes a foreword from Breitbart associate editor Milo Yiannopoulos and was reviewed positively in the conservative online magazine American Thinker.

Online progressives were not so supportive. Alexandra Erin, a sci-fi writer who described Day’s book as “rehashing old slights”, wrote a short parody of the book for Kindle. Entitled “John Scalzi Is Not A Very Popular Author And I Myself Am Quite Popular: How SJWs Always Lie About Our Comparative Popularity Levels,” the book makes fun of Day’s alleged fixation with the progressive sci-fi author John Scalzi.

Scalzi himself appeared to be delighted with the parody,  saying he “loved it already.” He used the book in a fundraising drive for a charity promoting diversity at sci-fi conventions, promising to release an audio recording of him reading the book if $2,500 was raised within three days. The target was successfully met, and Scalzi subsequently uploaded an audio recording.

Supporters of Vox Day responded by releasing their own parody book, entitled “John Scalzi Is A Rapist: Why SJWs Always Lie In Bed Waiting For His Gentle Touch; A Pretty, Pretty Girl Dreams of Her Beloved One While Pondering Gender Identity, Social Justice, and Body Dysmorphia.”

The counter-parody was removed by Amazon today following complaints from Scalzi. Prior to its removal, it was the top seller in the “parodies” section of the Kindle store, two places ahead of Erin’s book. Kindle top 100 rankings are calculated on an hourly basis, and surges in popularity for titles usually reflect a short, rapid increase in the number of purchases.

John Scalzi is a Rapist also performed well in the category of political philosophy, where it broke the top five. Vox Day’s original book remains the current bestseller, while Erin’s parody is further down the list at number 18. 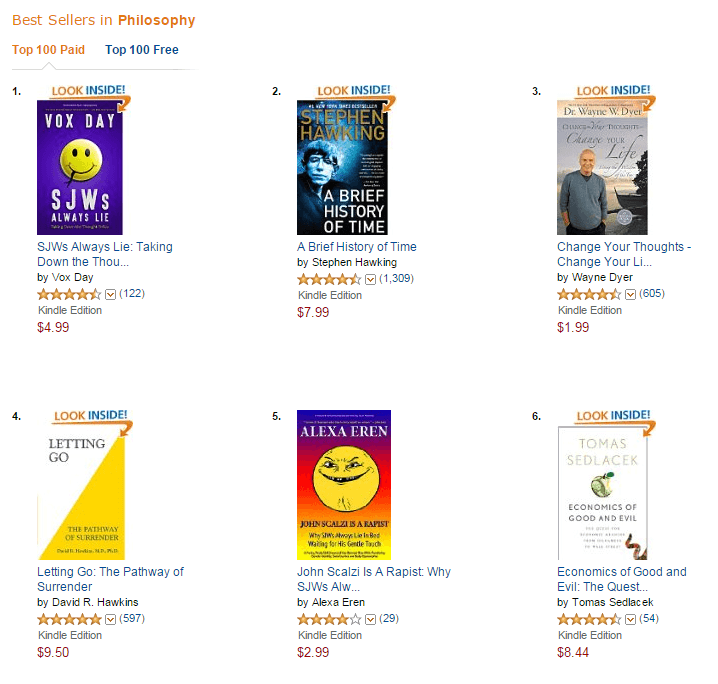 Both parody authors saw genuine returns for their products. The parody books were both under 30 pages long, and are unlikely to have taken much time to write. The fact that they became part of a buying war by two factions in the culture wars shows how animosity can be harnessed for profit.