On the heels of his announcement that he would open his own Traverse City, Michigan, home to Syrian refugees entering the U.S., leftwing filmmaker Michael Moore has launched a website to encourage Americans to join him in opening their own homes to refugees.

Moore has launched the “My Home is Open” campaign on his official website, through which Americans can register their own homes as shelters for Syrian refugees.

“I’m asking anyone who can, anyone who has spare rooms in their homes or an empty apartment, cottage, or whatever, to make it available for Syrian and Iraqi refugees for between six months and a year while they’re being settled in the U.S,” Moore writes on the campaign page, adding:

If you can do this, would you please sign up on the #MyHomeIsOpen registry. Your name and contact info will be kept private and will only be shared with the appropriate refugee agencies sanctioned and overseen by the Obama administration and its participating NGOs. They will contact you when they have refugees that they’ve vetted and need to be placed in homes.

Moore explained on Twitter that he is offering his own apartment in Michigan to Syrian refugees.

Heres my apt I offered to Syrian refugees. Sign up to join me in this effort. https://t.co/pPCr8P1Uen #MyHomeIsOpen pic.twitter.com/IERcXzMZ9g

Last week, Moore penned a letter to Michigan Gov. Rick Snyder blasting the lawmaker’s wish to halt the import of Syrian refugees into the state. In a show of defiance, Moore offered up his own home to refugees. 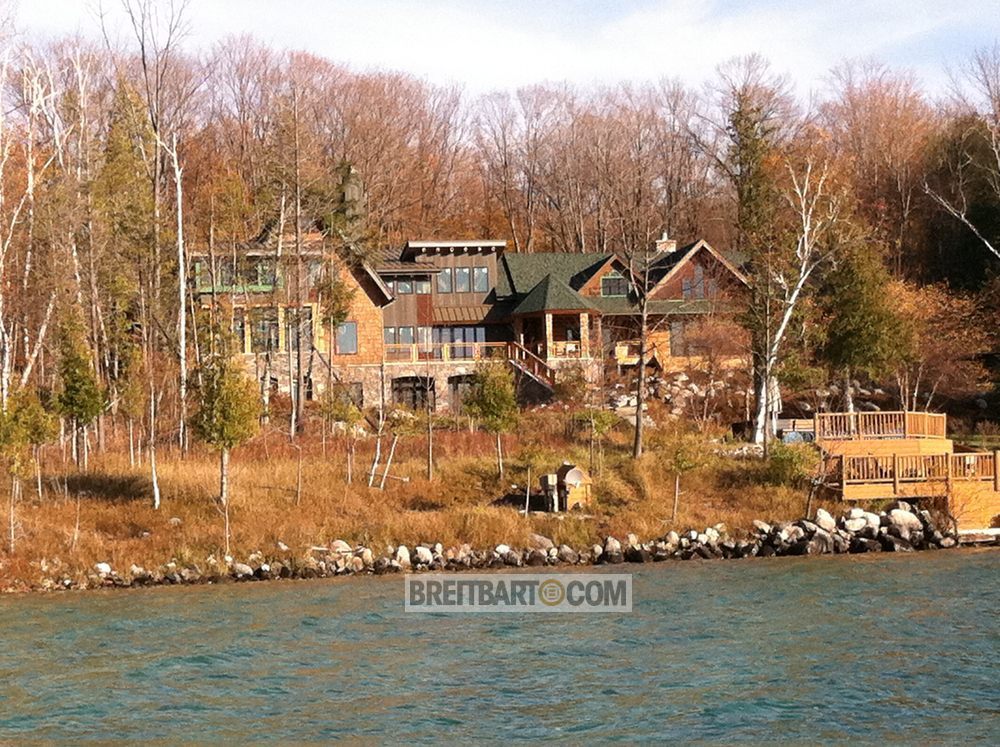 Michael Moore’s 10,000-square-foot mansion on Torch Lake, which is apparently not the residence he is offering to Syrian refugees.

“I just wanted to let you know that, contrary to your declaration of denying Syrian refugees a home in our state of Michigan, I myself am going to defy your ban and will offer MY home in Traverse City, Michigan, to those very Syrian refugees you’ve decided to keep out,” Moore wrote in the letter posted to Facebook. “I will contact the State Department to let them know I am happy to provide a safe haven to any Syrian refugee couple approved by the Obama administration’s vetting procedures in which I have full faith and trust.”

On his new crowd-housing campaign page, Moore seemed to acknowledge the incredulity of his own project.

“I’m not kidding about this,” the Where to Invade Next filmmaker wrote. “I’m making my apartment in Michigan available, rent-free, for six months to a year until the Syrian family gets settled and is doing well on their own.”

My family came here from Ireland in the 1800s. I know what it was like for them. There was bigotry and harassment — but there were also those who held out a helping hand. That I would have the chance to do the same thing for a new family of immigrants 150 years later is an honor. (Besides, legend has it that St. Patrick was originally from Syria/Lebanon — so I’m just passing on the green!)

As of this post, 49 people have signed up to make their homes available to refugees.

“THIS is what we want the ‘American way’ to be from now on,” Moore concludes. “No more war, or interfering in other people’s lives, no more turning our backs on the messes that we’ve created.”