A group of pro-Quentin Tarantino demonstrators gathered across the street from the New York premiere of The Hateful Eight on Monday to show their support for the embattled director.

Since describing police officers a “murderers” at an anti-police brutality rally two months ago, Tarantino has been the subject of a nationwide law enforcement boycott.

After Tarantino’s comments, Fraternal Order of Police (FOP) executive director Joe Paso warned his organization had a “surprise” planned for both The Hateful Eight and its director.

“The right time and place will come up, and we’ll try to hurt him in the only way that seems to matter to him, and that’s economically,” said Pasco.

While hundreds-of-thousands pledged a ban of the western after Tarantino’s “murderer” comments, and other statements, no pro-law enforcement protesters were present outside of Manhattan’s Ziegfeld Theater Monday for the premiere. Last week’s Los Angeles premiere was also absent of protests.

Instead, campaigners for Rise Up October turned up in support of the director in New York on Monday.

According to The Hollywood Reporter, after the red carpet ceremony opened at 6 p.m., a small group of Rise Up members gathered across the street and could be seen holding up signs.

A protester going by the name Sister Shirley told the industry publication, “We stand behind him [Tarantino] and we’re glad that he’s standing behind us because murder is murder, no matter who does it.”

She added: “Unfortunately there are too many police officers, law-enforcement officers, all around the United States who are killing, they’re murdering people, and they’re getting away with it. We’re saying enough is enough and we’re not going away.”

After noticing the demonstrators, Tarantino greeted them warmly, and walked across the street to autograph a protest sign, Shirley said. 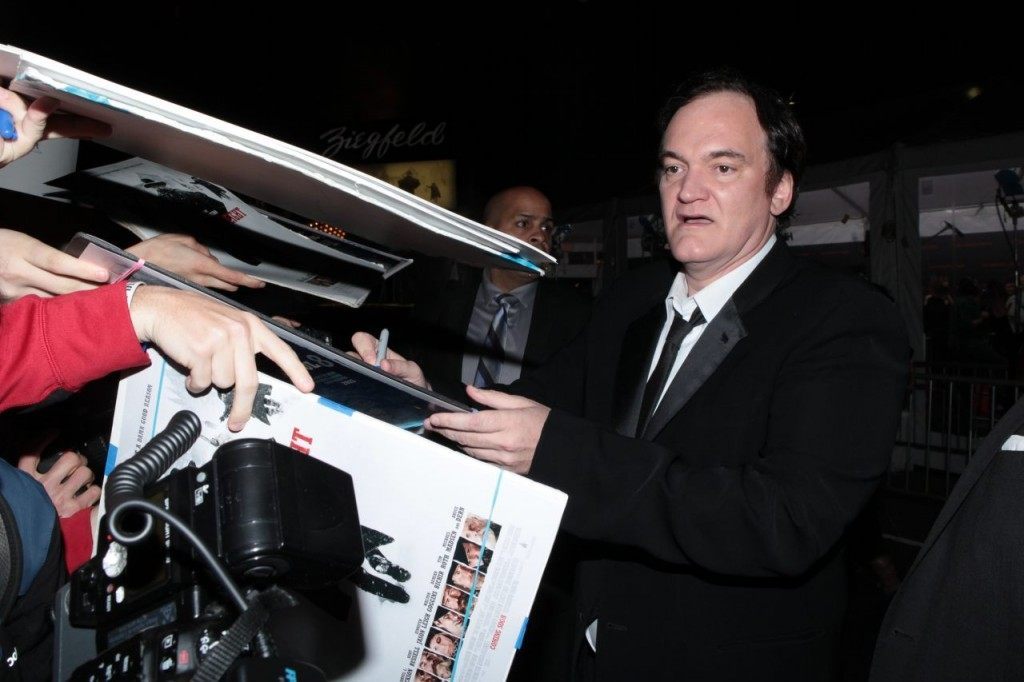 THR also spoke to Hateful Eight producers Stacey Sher, Richard Gladstein and Shannon McIntosh. All three dismissed the controversy, while praising on Tarantino for speaking out against a perceived injustice.

Gladstein told THR Tarantino was speaking out against an issue that is important to him.

“As far as I’m concerned, it should be met with applause,” said the producer.

Sher said of the controversy, “Thank God in America we still have the rights to free speech — that’s what makes our country great.”