Despite what you’re seeing on every cable network, on the cover of every newspaper, and as the lead story on every website, the White House has an important message for women and it isn’t about terrorism and radical Islam. It’s about “gender inequality” in America.

It’s clear that the White House, the media, and others on the Left are living in a bubble. Several months ago I attended a White House event with 50 or so female writers and bloggers. At the event, First Lady Michelle Obama talked about her pet program, Let’s Move. She waxed on about the progress they’ve made by changing nutritional guidelines for school lunches. When it was time to take pre-screened questions, I sat back because I knew my question – Do you believe parents or local schools should have responsibility for setting guidelines rather than the federal government? – would not get me called on by the organizers. One of the questions that did make the cut – Why do we not have a program for physical fitness modeled after Common Core?

Talk to any mother with kids in public schools and the last successful federal program they’ll name is Common Core. 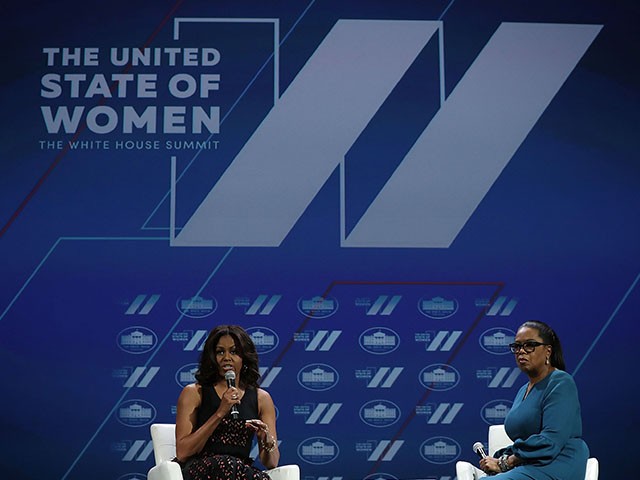 Like most “empowerment” efforts by feminists, the United State of Women Summit quickly became a parade of victimhood and man-bashing. Actress Patricia Arquette continued spreading the myth of the wage gap. Since her scatter-brained speech at the Oscars, she’s been christened an expert on the matter. Deadline reported:

Patricia Arquette, who gave an impassioned speech advocating equal pay for women at the Oscars in 2015, took the summit stage today to note this first White House United State of Women Summit is being held 100 years after women got the right to vote.

Last year the Boyhood star, accepting her best supporting-actress Oscar, brought Meryl Streep and others in the hall to their feet in applause, when she said, “To every woman who gave birth to every taxpayer and citizen of this nation, we have fought for everybody else’s equal rights.  “It’s our time to have wage equality once and for all and equal rights for women in the United States of America.”

The wage gap myth has been widely discredited, though Meryl Streep’s impassioned act of pretending to care about the average woman was award-worthy. In fairness, it must be quite annoying to Patricia Arquette that her reported net worth is $24 million and her non-Oscar-winning brother David Arquette is worth $25 million.

The next day, the summit featured Oprah Winfrey interviewing Michelle Obama. Just two average gals! They discussed men’s role in gender equality. The First Lady’s advice to men was simple – “Be better.” She told the audience:

Men can be better husbands, which is — be a part of your family’s life. Do the dishes. Don’t babysit your children. You don’t babysit your own children. Be engaged. Don’t just think going to work and coming home makes you a man. Being a father, being engaged, all that stuff is important. Be a better employer. When you are sitting at a seat of power at a table of any kind and you look around you just see you, it’s just you and a bunch of men around a table, on a golf course, making deals, and you allow that to happen, and you’re OK with that — be better.

What a touching message the week before Father’s Day. Kudos to the First Lady for making me sympathetic toward President Obama.