During a radio interview broadcast last night, comedian Jackie Mason deployed his trademark Borscht Belt humor to target the Academy Awards – jesting that a toilet is far more important than actors and movies.

He was speaking during his regular segment on this reporter’s talk radio program, “Aaron Klein Investigative Radio,” broadcast on New York’s AM 970 The Answer and NewsTalk 990 AM.

Listen to the full audio here:

“Except for the Super Bowl there is nothing bigger than the Academy Awards,” he lamented. “Everything that is inconsequential that can’t affect anybody that in the long run makes no difference anywhere in the world is always the most popular show.” 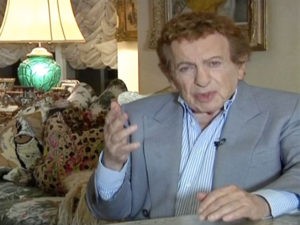 “Somehow if it matters, if it affects everybody in the world nobody shows up. Nobody wants to hear about it. I think there are more important things than a movie or an actor. You would think that the world can’t exist without an actor or a movie. I think anything is more important than an actor or a movie. Anything. Even a toilet. Especially in toilet.”

Let’s be honest. What is more important to you – a toilet or a movie? What’s more important, a plumber or an actor? If an actor doesn’t show up it, does it make a difference to you? But if you call the plumber and he doesn’t show up, boy are you in trouble. All of the sudden you don’t know what to do with yourself. You start to wonder how are you going to live like this. I never heard a person say, ‘I haven’t seen a movie in a year. I don’t know what to do. It’s killing me.’ I never heard anybody say that.

Let’s be honest about it. You ever see a guy on the highway say to his wife, ‘I’ve got to get off the highway.’ ‘What’s the matter?’ ‘I have to go to the movies.’ It’s no accident that every time you go into a movie there’s no question about it that there will be a toilet. But when you go to a toilet do you ever see them say, ‘Here’s the movie?’ A toilet can exist without a movie. But a movie can’t exist without a toilet.

You’ve got to be insane to think this is the most important thing. Watch a person coming out of a movie. Some liked it; some didn’t. Some look happy, sad, mad, glad. But watch somebody coming out of a toilet. All of a sudden you see the happiest man in the world. You would think that he just won the lottery. Tell the guy, ‘I’ve got a million dollars it’s for you.’ He won’t look as happy as he would be if you told him, ‘I’ve got the million, but there’s no toilet.’