Comedy Central’s Daily Show has been blasted on social media and accused of ridiculing transgender people after the show’s official Twitter account cracked a joke about President Donald Trump transitioning into a woman.

The official Twitter account for the Trevor Noah-hosted show posted a message Wednesday asking viewers to pick what they thought Thursday’s biggest news headline would be. 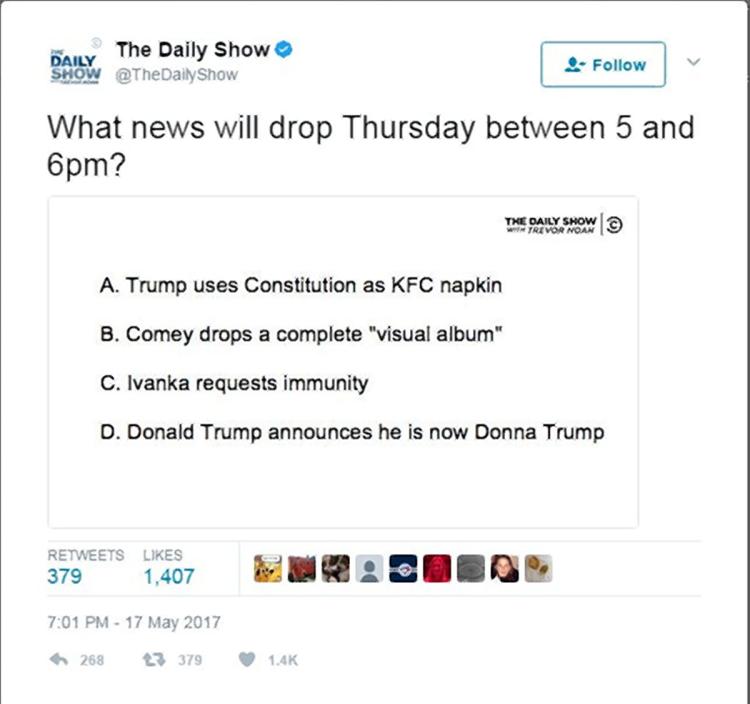 The last joke apparently set off social media, as users wasted no time in ripping the Daily Show for making light of transgender transitioning.

Some users noted the joke was particularly offensive because it was made on International Day Against Homophobia, Transphobia & Biphobia.

Of course the Daily Show ran a lazy transphobic joke on the Intl Day against Homophobia, Biphobia, and Transphobia / the day Chelsea is free

SNL used homophobia to "make fun" of trump and the Daily Show used transphobia today to the same ends. There must be a better way.

Repeat after me: gender identity is not a punchline https://t.co/7cRU4jr2ik

Haha you're right daily show. Someone transitioning is definitely as crazy as the other things on this list

Literally the easiest target in the ENTIRE WORLD and you go for a trans joke?

It's using us as a punch line which directly contributes to a climate where other bigots think they can murder us without consequences.

Do better Daily Show. Trans people are not punch lines. 😡

no one at the daily show has ever even acknowledged their history of transphobia, much less apologized

Speaking of the Daily Show and transphobia this from 2003 seems relevant. Also props to @Dennis_Kucinich pic.twitter.com/Z8CKnGTdUZ

Neither the show nor its host Trevor Noah offered an immediate comment to address the situation.