Late Show host Stephen Colbert delivered a Nazi salute during his Thursday night monologue on the CBS show, while discussing President Donald Trump’s response to the political violence in Charlottesville, Virginia, in August.

“He’s definitely taking it to a higher level,” the late-night host and outspoken anti-Trump critic said of Trump’s response to the violence in Charlottesville last month, in which one woman was killed and more than a dozen injured when white nationalists squared off with left-wing Antifa counter-protesters during a rally.

“I’d say his support is right up there, right around here,” Colbert mocked, while performing a Nazi salute. 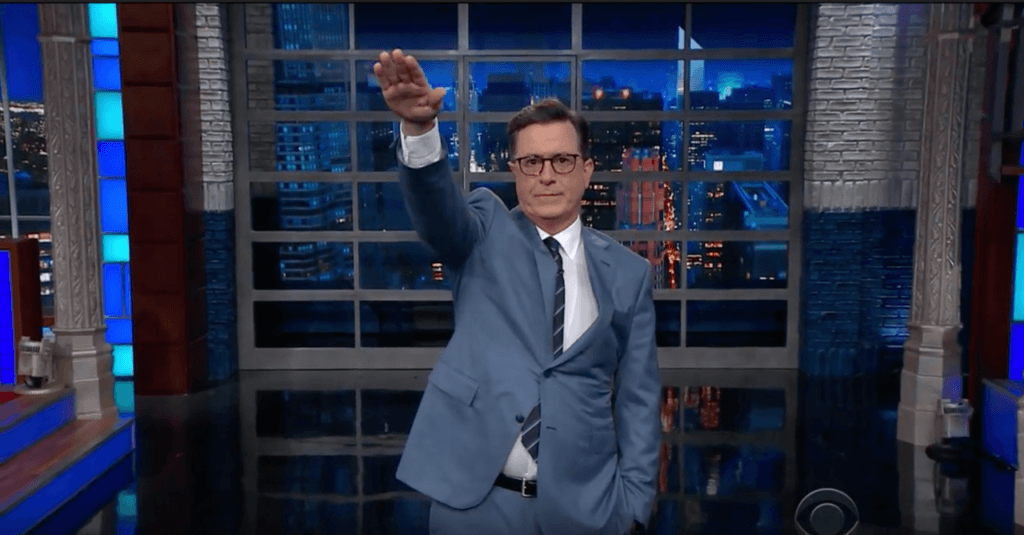 This is not the first time Colbert has used Nazi imagery to slam the president and his policies.

During the 2016 presidential campaign in January of last year, the late-night host drew a swastika on a chalkboard to connect various terms in a bit accusing then-candidate Trump of “fear-mongering.”

Colbert has also depicted violence against members of Trump’s administration, including putting senior aide Stephen Miller’s head on a spike during a taped segment, and earlier this year sparked outrage when he referred to the president’s mouth as “Vladimir Putin’s c*ck holster.”

The FCC said it had looked into complaints about the remark, but ultimately declined to penalize CBS.

Colbert has parlayed his position as the perhaps the most anti-Trump host in late-night television into stronger ratings. The former Comedy Central star struggled mightily when he first took over for David Letterman in 2015, often falling behind Jimmy Fallon’s less-political Tonight Show. After ramping up his attacks on Trump, Colbert has regularly beaten Fallon in the late-night ratings race, though Fallon usually maintains a lead in the key demo.