Almost all of the cultural and political power possessed by Hollywood and the mainstream media is held up by a one-legged stool, a single leg that gets shakier by the month — this increasingly fragile appendage we call the Pay TV Package. Going forward, for reference purposes, the Pay TV Package is your cable or satellite bundle, which brings with it hundreds of channels and a monthly bill that dings you for $1000 to $1500 a year.

Without this bundle, almost every institution determined to destroy everything you hold dear — faith, family, country, individual liberty, self-reliance, prosperity, racial harmony, and moral decency — would disappear entirely or at least be much weaker than it currently is. Of course, I am talking about CNN, ESPN, Comedy Central, Disney, MTV, MSNBC, and the like — institutions you — yes YOU — are subsidizing against your will.

Oh, you think you are hurting CNN and ESPN by not watching them. Yeah, every time you flip on past those left-wing networks you are pretty darn proud of yourself cuz you are showing them a thing or two about a thing or two.

Say goodbye to your ratings, CNN and ESPN!

Sorry, it just does not work that way.

If you got a moment, I am going to ‘splain how it actually does work.

Man alive, is it rigged.

What if I told you ratings do not matter? Would that sound rigged enough to you?

Well … ratings do not matter.

With so many viewers, how, then, does CNN afford to make millionaires of all these smug serial- liars like Jake Tapper; these five-foot bullies like Andrew Kaczynski; these breathtakingly stupid crybabies like Don Lemon; all these left-wing panelists; these Trump-hating pundits; these bitter, little dim-witted George Costanzas like Brian Stelter?

If CNN or ESPN or a whole bunch of other networks dedicated to your destruction are part of your cable package, every single month, YOU are cutting them a check, empowering them with cold hard cash, funding the very superpower these super-villains have dedicated to annihilating you and yours.

It is called a “carriage fee,” and this hidden fee is why your cable bill is so obnoxiously expensive.

Come on… Did you honestly think your cable company needed all that money just to maintain wires, DVRs, and the minimum wage for extremely unhelpful customer service reps?

No, the reason your cable bill is so expensive is because — whether or not you watch these left-wing networks — the game has been rigged to the point where you are paying for them anyway.

Cut your Pay TV cord. Whether it is cable, whether it is satellite, you have to cut that cord.

Sorry, but NOT watching is not enough. These left-wing leeches have found a way around the fact that almost everyone in the world hates them. But…

If you stop paying your cable bill, you are sticking your part of the wooden stake into the heart of the Beast.

Look at this graph. As of 2014, that is how much money per month per pay TV customer (about 88 million) these hideous networks rake in… 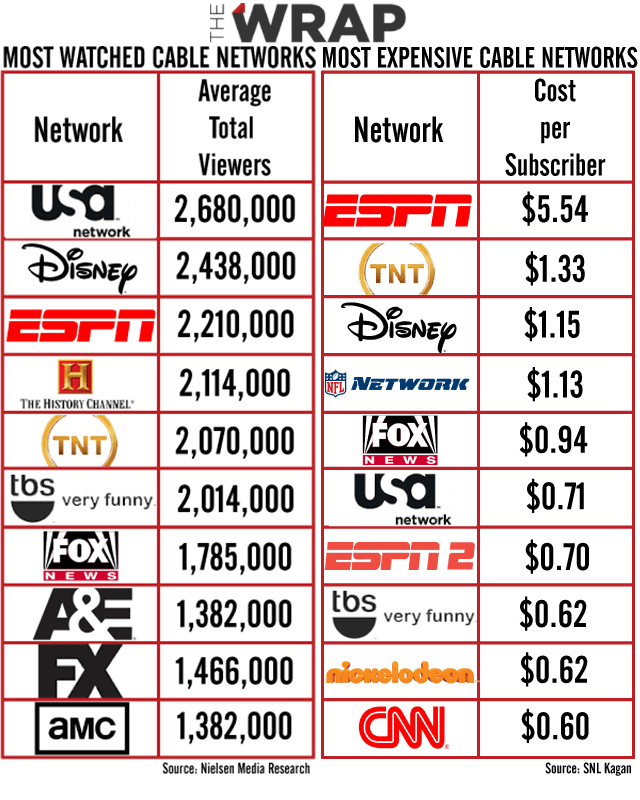 Cord-cutting is the Numero Uno threat to these massive, left-wing corporate institutions. For example, cord-cutting has already brutalized ESPN, which is the left-wing Disney company’s most sacred cash cow.

Cord-cutting affects stock prices, has resulted in massive layoffs (including — tee hee — Keith Olbermann), and has forced Disney, ESPN, HBO, and a host of others to do what they said they would never do — either license their product to streaming services or launch standalone streaming services.

And guess what a standalone streaming service survives on and only survives on? Customers who actually want that service. In other words, MERIT, not a rigged Pay TV system that forces 87 million who do NOT watch CNN to still enrich CNN.

So let me ask you this…

Why in heaven’s name would you fund your own destruction? For sports? For Fox News? For Turner Classic Movies? For House Hunters? For The Walking Dead? This is like allowing raw sewage to be pumped into your home 24/7 just because an occasional rose pops up. Oh, and paying $100 a month for that service.

For your country, for your future, for yourself — you must cut the cord.

And now comes the best news…

Eighteen months ago, I cut the cord, and my life is all the richer for it. Not just monetarily, but overall.

Even though I live out in the middle of nowhere, a one-time $100 investment in an antenna brought seven totally free channels into our home. Having camped outside of a number of big cities, from Chicago to Milwaukee to Charleston, I can tell you that there are dozens of free channels awaiting anyone who lives in or near a population area.

You want 24/7 news? You will find it on the Internet or, for the price of a Roku, you’ll find a 24/7 CBS cable news network that is absolutely free and nowhere near as obnoxious, aggravating, or corrupt as CNN.

The first month without cable TV was, to be honest, difficult for my wife and me.

But today we wouldn’t allow that filth in our home for free.

If not for yourself, do it for the children.