LOS ANGELES (AP) — Playboy founder Hugh M. Hefner, the pipe-smoking hedonist who revved up the sexual revolution in the 1950s and built a multimedia empire of clubs, mansions, movies and television, symbolized by bow-tied women in bunny costumes, has died at age 91.

Hefner died of natural causes at his home surrounded by family on Wednesday night, Playboy said in a statement.

As much as anyone, Hefner helped slip sex out of the confines of plain brown wrappers and into mainstream conversation.

In 1953, a time when states could legally ban contraceptives, when the word “pregnant” was not allowed on “I Love Lucy,” Hefner published the first issue of Playboy, featuring naked photos of Marilyn Monroe (taken years earlier) and an editorial promise of “humor, sophistication and spice.” The Great Depression and World War II were over and America was ready to get undressed.

Playboy soon became forbidden fruit for teenagers and a bible for men with time and money, primed for the magazine’s prescribed evenings of dimmed lights, hard drinks, soft jazz, deep thoughts and deeper desires. Within a year, circulation neared 200,000. Within five years, it had topped 1 million. 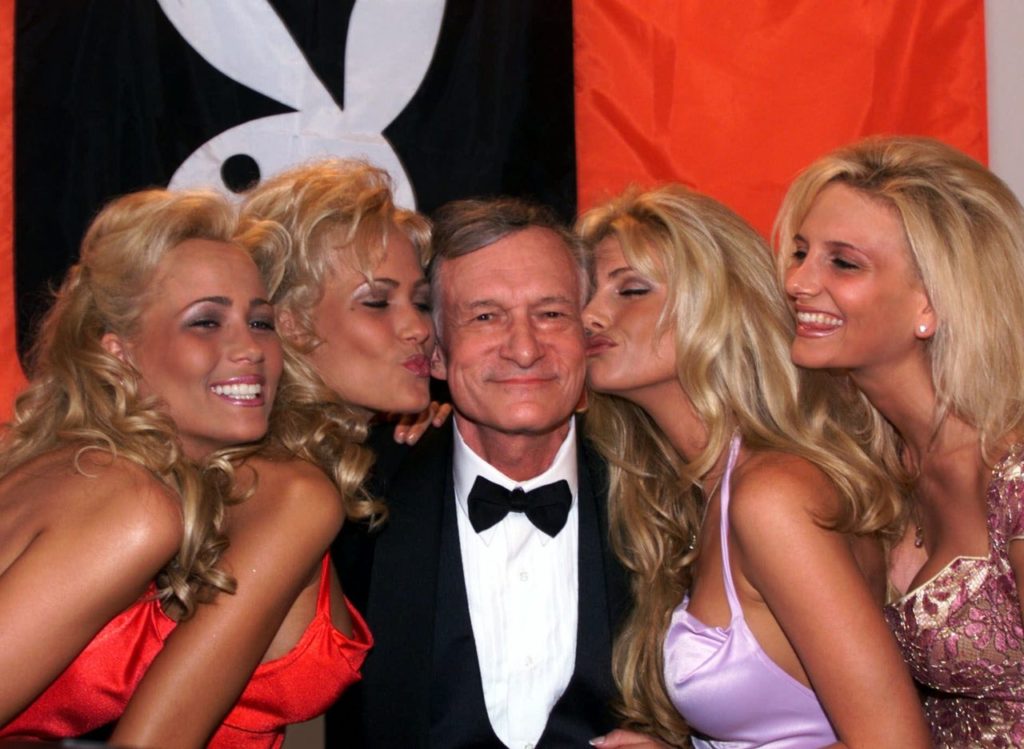 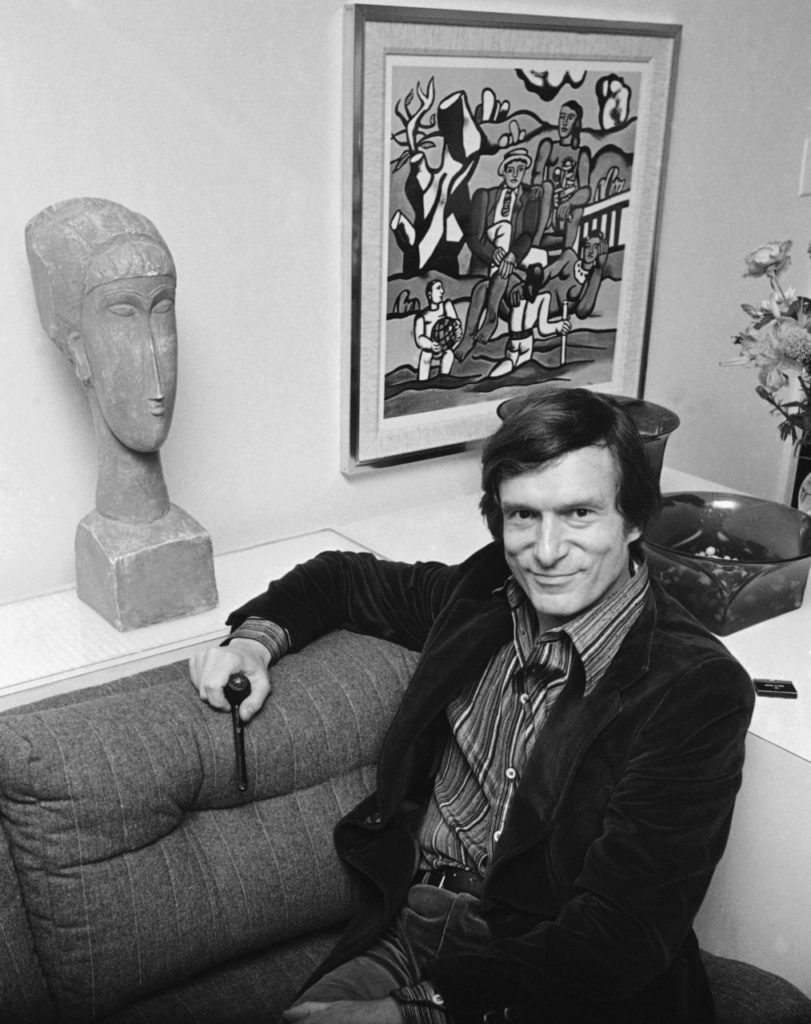 By the 1970s, the magazine had more than 7 million readers and had inspired such raunchier imitations as Penthouse and Hustler. Competition and the internet reduced circulation to less than 3 million by the 21st century, and the number of issues published annually was cut from 12 to 11. In 2015, Playboy ceased publishing images of naked women, citing the proliferation of nudity on the internet.

Asked by The New York Times in 1992 of what he was proudest, Hefner responded: “That I changed attitudes toward sex. That nice people can live together now. That I decontaminated the notion of premarital sex. That gives me great satisfaction.”

Hefner ran Playboy from his elaborate mansions, first in Chicago and then in Los Angeles, and became the flamboyant symbol of the lifestyle he espoused. For decades he was the pipe-smoking, silk-pajama-wearing center of a constant party with celebrities and Playboy models. By his own account, Hefner had sex with more than a thousand women, including many pictured in his magazine. One of rock n’ roll’s most decadent tours, the Rolling Stones shows of 1972, featured a stop at the Hefner mansion.

Throughout the 1960s, Hefner left Chicago only a few times. In the early 1970s, he bought the second mansion in Los Angeles, flying between his homes on a private DC-9 dubbed “The Big Bunny,” which boasted a giant Playboy bunny emblazoned on the tail.

Hefner was host of a television show, “Playboy After Dark,” and in 1960 opened a string of clubs around the world where waitresses wore revealing costumes with bunny ears and fluffy white bunny tails. In the 21st century, he was back on television in a cable reality show — “The Girls Next Door” — with three live-in girlfriends in the Los Angeles Playboy mansion. Network television briefly embraced Hefner’s empire in 2011 with the NBC drama “The Playboy Club,” which failed to lure viewers and was canceled after three episodes.

Censorship was inevitable, starting in the 1950s, when Hefner successfully sued to prevent the U.S. Postal Service from denying him second-class mailing status. Playboy has been banned in China, India, Saudi Arabia and Ireland, and 7-Eleven stores for years did not sell the magazine. Stores that did offer Playboy made sure to stock it on a higher shelf.

Women were warned from the first issue: “If you’re somebody’s sister, wife, or mother-in-law,” the magazine declared, “and picked us up by mistake, please pass us along to the man in your life and get back to Ladies Home Companion.” 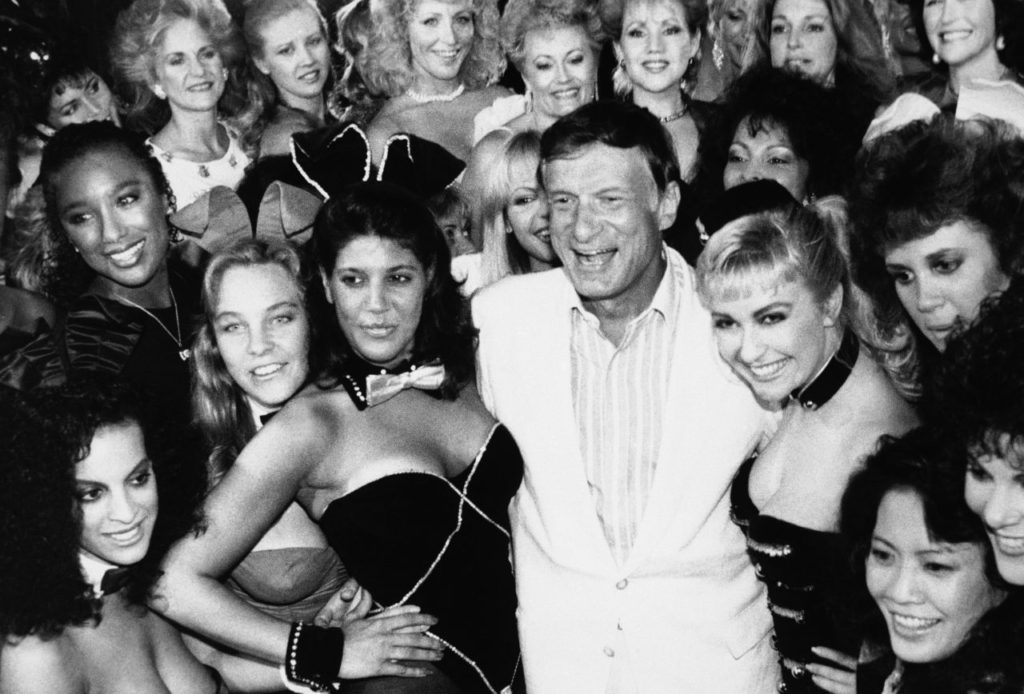 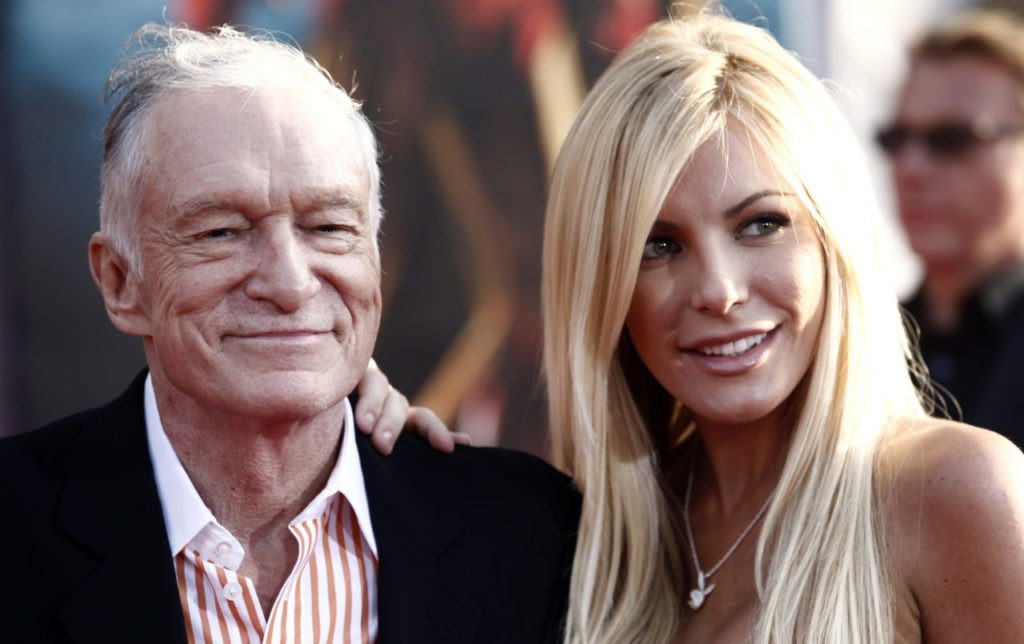 In this April 26, 2010 file photo, Hugh Hefner, left, and Crystal Harris arrive at the premiere of “Iron Man 2” at the El Capitan Theatre in Los Angeles. (AP Photo/Matt Sayles, File)

Playboy proved a scourge, and a temptation. Drew Barrymore, Farrah Fawcett and Linda Evans are among those who have posed for the magazine. Several bunnies became celebrities, too, including singer Deborah Harry and model Lauren Hutton, both of whom had fond memories of their time with Playboy. Other bunnies had traumatic experiences, with several alleging they had been raped by Hefner’s close friend Bill Cosby, who faced dozens of such allegations. Hefner issued a statement in late 2014 he “would never tolerate this behavior.” But two years later, former bunny Chloe Goins sued Cosby and Hefner for sexual battery, gender violence and other charges over an alleged 2008 rape.

Hefner added that he was a strong advocate of First Amendment, civil rights and reproductive rights and that the magazine contained far more than centerfolds. Playboy serialized Ray Bradbury’s “Fahrenheit 451” and later published fiction by John Updike, Doris Lessing and Vladimir Nabokov. Playboy also specialized in long and candid interviews, from Fidel Castro and Frank Sinatra to Marlon Brando and then-presidential candidate Jimmy Carter, who confided that he had “committed adultery” in his heart. John Lennon spoke to Playboy in 1980, not long before he was murdered.

The line that people read Playboy for the prose, not the pictures, was only partly a joke.

Playboy’s clubs also influenced the culture, giving early breaks to such entertainers as George Carlin, Rich Little, Mark Russell, Dick Gregory and Redd Foxx. The last of the clubs closed in 1988, when Hefner deemed them “passe” and “too tame for the times.”

By then Hefner had built a $200 million company by expanding Playboy to include international editions of the magazine, casinos, a cable network and a film production company. In 2006, he got back into the club business with his Playboy Club at the Palms Casino in Las Vegas. A new enterprise in London followed, along with fresh response from women’s groups, who protested the opening with cries of “Eff off Hef!’”

Hefner liked to say he was untroubled by criticism, but in 1985 he suffered a mild stroke that he blamed on the book “The Killing of the Unicorn: Dorothy Stratten 1960-1980,” by filmmaker Peter Bogdanovich. Stratten was a Playmate killed by her husband, Paul Snider, who then killed himself. Bogdanovich, Stratton’s boyfriend at the time, wrote that Hefner helped bring about her murder and was unable to deal with “what he and his magazine do to women.”

After the stroke, Hefner handed control of his empire to his feminist daughter, Christie, although he owned 70 percent of Playboy stock and continued to choose every month’s Playmate and cover shot. Christie Hefner continued as CEO until 2009.

He also stopped using recreational drugs and tried less to always be the life of the party. He tearfully noted in a 1992 New York Times interview: “I’ve spent so much of my life looking for love in all the wrong places.” 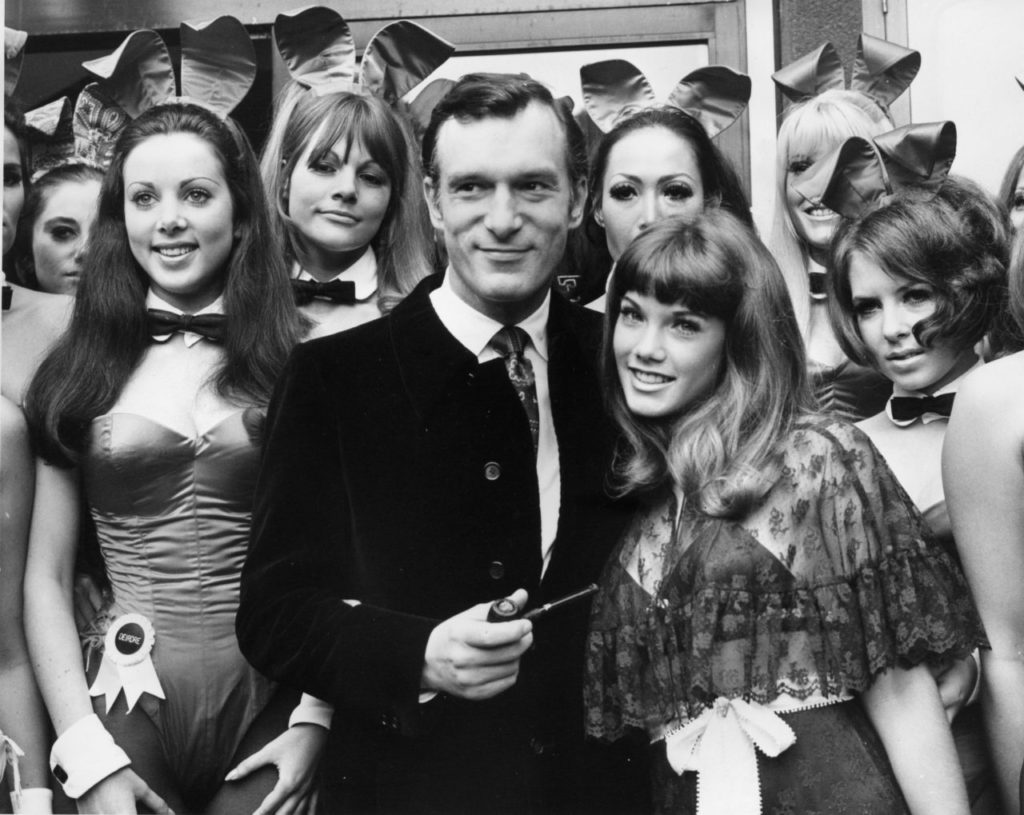 5th September 1969: Hugh Hefner, head of the Playboy Clubs on a visit to his London club in Park Lane, London. With him is his 19 year old girl friend Barbara Benton and a group of Bunny Girls. (Photo by Central Press/Getty Images) 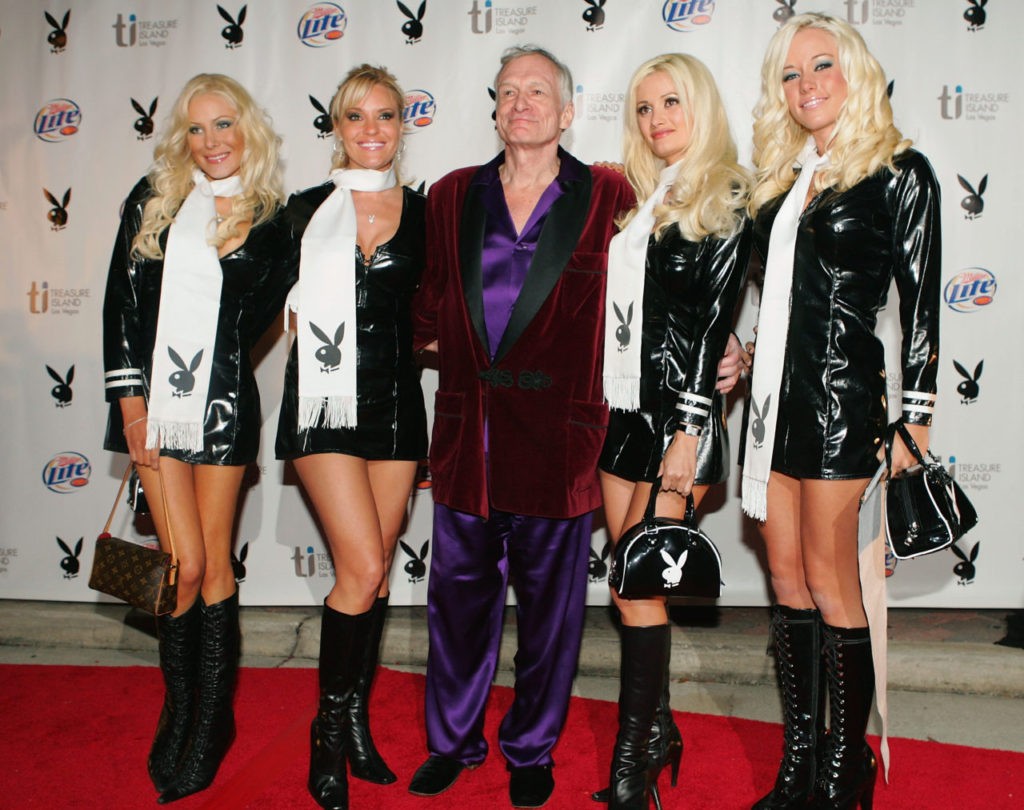 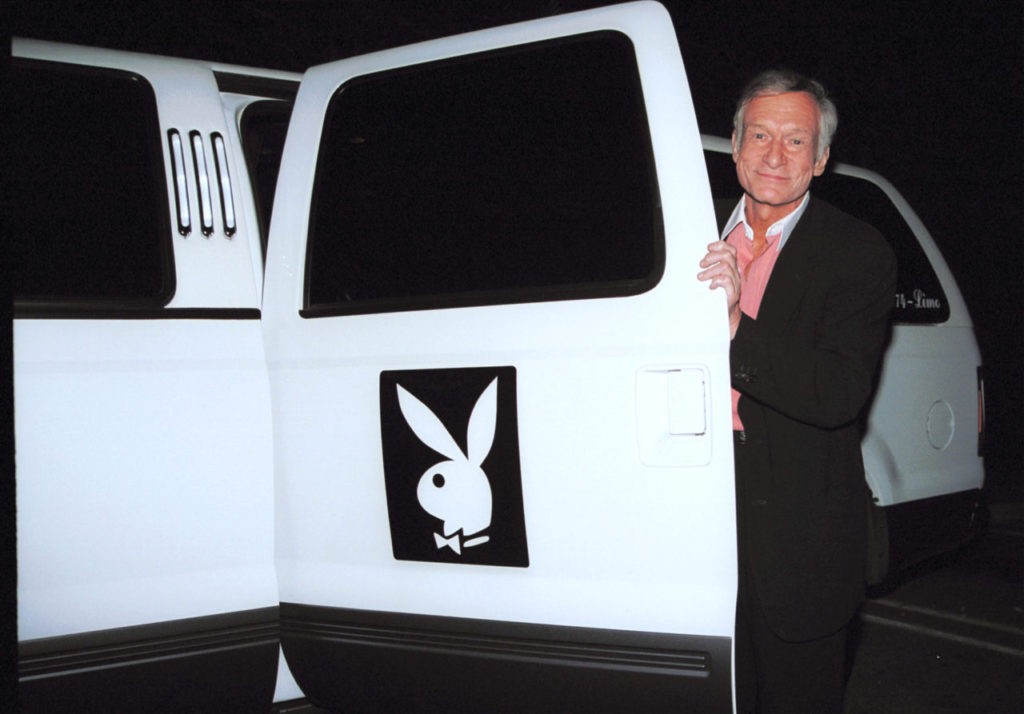 Not surprisingly, Hefner’s marriage life was also a bit of a show. In 1949, he married Mildred Williams, with whom he had two children. They divorced in 1958. In July 1989, Hefner married Kimberley Conrad, the 1989 Playmate of the Year, who was then 27. The couple also had two children.

They separated in 1998 but she continued living next door to the Playboy mansion with their two sons. The couple divorced in 2010 and he proposed in 2011 to 24-year-old Crystal Harris, a former Playmate. Harris called off the wedding days before the ceremony, but changed her mind and they married at the end of 2012.

“Maybe I should be single,” he said a few months later. “But I do know that I need an ongoing romantic relationship. In other words, I am essentially a very romantic person, and all I really was looking for, quite frankly, with the notion of marriage was continuity and something to let the girl know that I really cared.”

He acknowledged, at age 85, that “I never really found my soulmate.”

Hefner was born in Chicago on April 9, 1926, to devout Methodist parents who he said never showed “love in a physical or emotional way.”

“At a very early age, I began questioning a lot of that religious foolishness about man’s spirit and body being in conflict, with God primarily with the spirit of man and the Devil dwelling in the flesh,” Hefner said in a Playboy interview in 1974.

“Part of the reason that I am who I am is my Puritan roots run deep,” he told the AP in 2011. “My folks are Puritan. My folks are prohibitionists. There was no drinking in my home. No discussion of sex. And I think I saw the hurtful and hypocritical side of that from very early on. ”

Hefner loved movies throughout his life, calling them “my other family.” He screened classic films and new releases at the mansion every week. Every year on his April 9 birthday, he’d run his favorite film, “Casablanca,” and invite guests to dress in the fashions of the 1940s.

He was a playboy before Playboy, even during his first marriage, when he enjoyed stag films, strip poker and group sex. His bunny obsession began with the figures that decorated a childhood blanket. Years later, a real-life subspecies of rabbit on the endangered species list, in the Florida Keys, would be named for him: Sylvilagus palustris hefneri.

When Hefner was 9, he began publishing a neighborhood newspaper, which he sold for a penny a copy. He spent much of his time writing and drawing cartoons, and in middle school began reading Esquire, a magazine of sex and substance Hefner wanted Playboy to emulate.

He and Playboy co-founder Eldon Sellers launched their magazine from Hefner’s kitchen in Chicago, although the first issue was undated because Hefner doubted there would be a second. The magazine was supposed to be called Stag Party, until an outdoor magazine named Stag threatened legal action.

Hefner recalled that he first reinvented himself in high school in Chicago at 16, when he was rejected by a girl he had a crush on. He began referring to himself as Hef instead of Hugh, learned the jitterbug and began drawing a comic book, “a kind of autobiography that put myself center stage in a life I created for myself,” he said in a 2006 interview with the AP.

Those comics evolved into a detailed scrapbook that Hefner would keep throughout his life. It spanned more than 2,500 volumes in 2011 — a Guinness World Record for a personal scrapbook collection.

“It was probably just a way of creating a world of my own to share with my friends,” Hefner said, seated amid the archives of his life during a 2011 interview. “And in retrospect, in thinking about it, it’s not a whole lot different than creating the magazine.”

He did it again in 1960, when he began hosting the TV show, bought a fancy car, started smoking a pipe and bought the first Playboy mansion.