First Lady Melania Trump stole the show in high fashion as she arrived alongside President Donald Trump in Tokyo, Japan on Sunday wearing a technicolor, ombre coat with floral embellishments.

Underneath the coat, Melania chose a simple black leather pencil skirt from her personal stylist and designer Hervé Pierre, as well as nude-toned Manolo Blahnik stilettos. 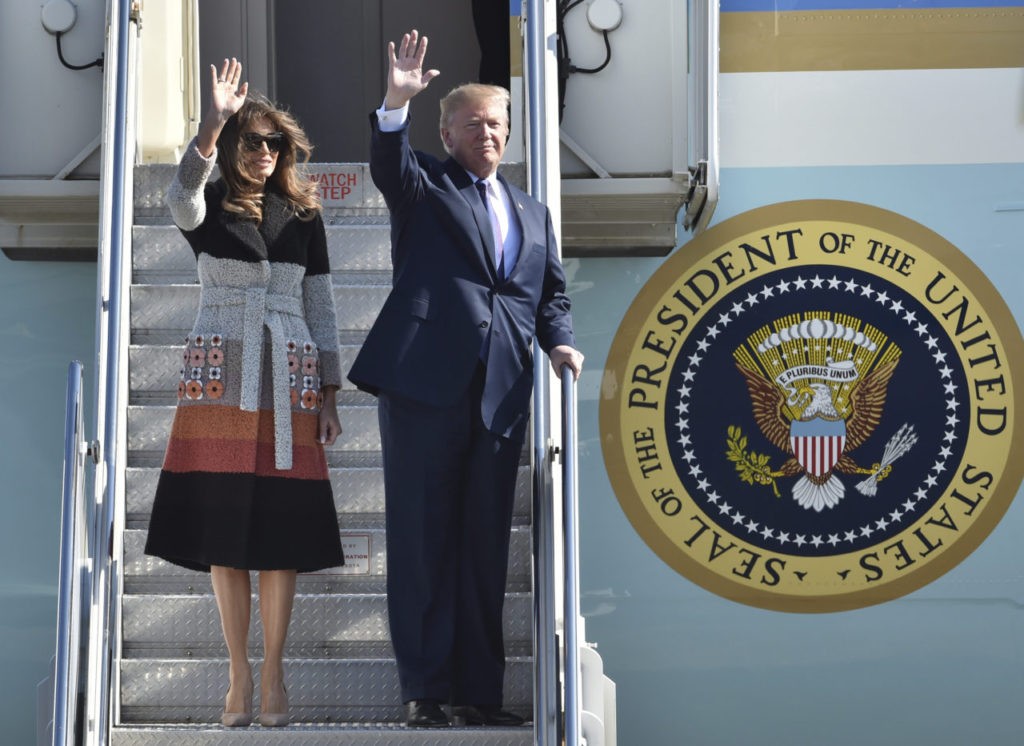 U.S. President Donald Trump, right, and first lady Melania Trump, left, wave on their arrival at the U.S. Yokota Air Base, on the outskirts of Tokyo, Sunday, Nov. 5, 2017. (Kazuhiro Nogi/Pool Photo via AP) 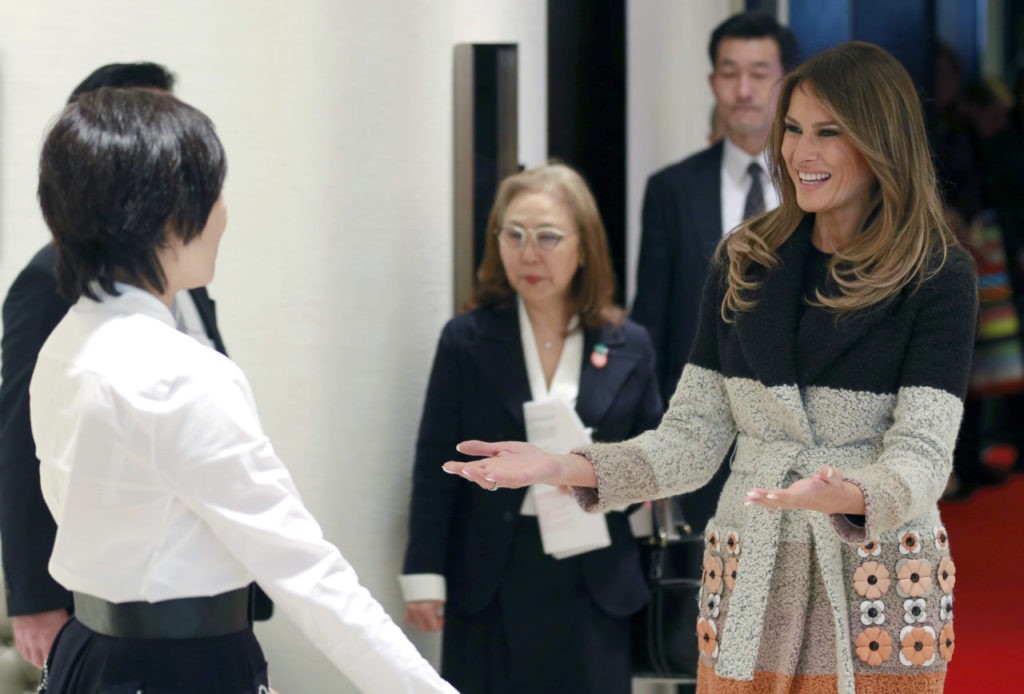 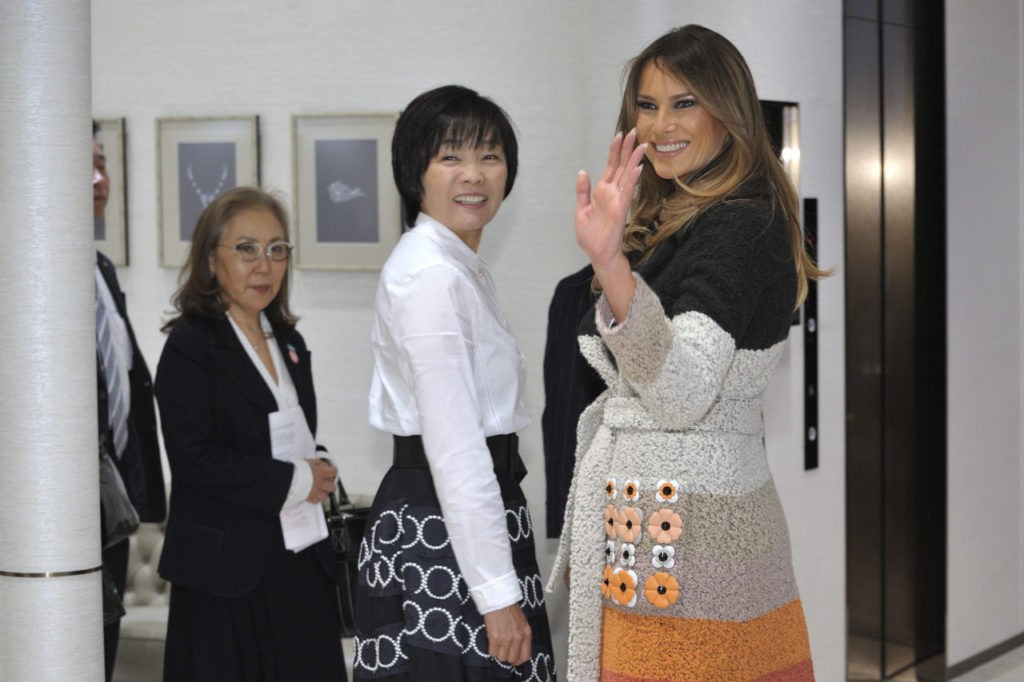 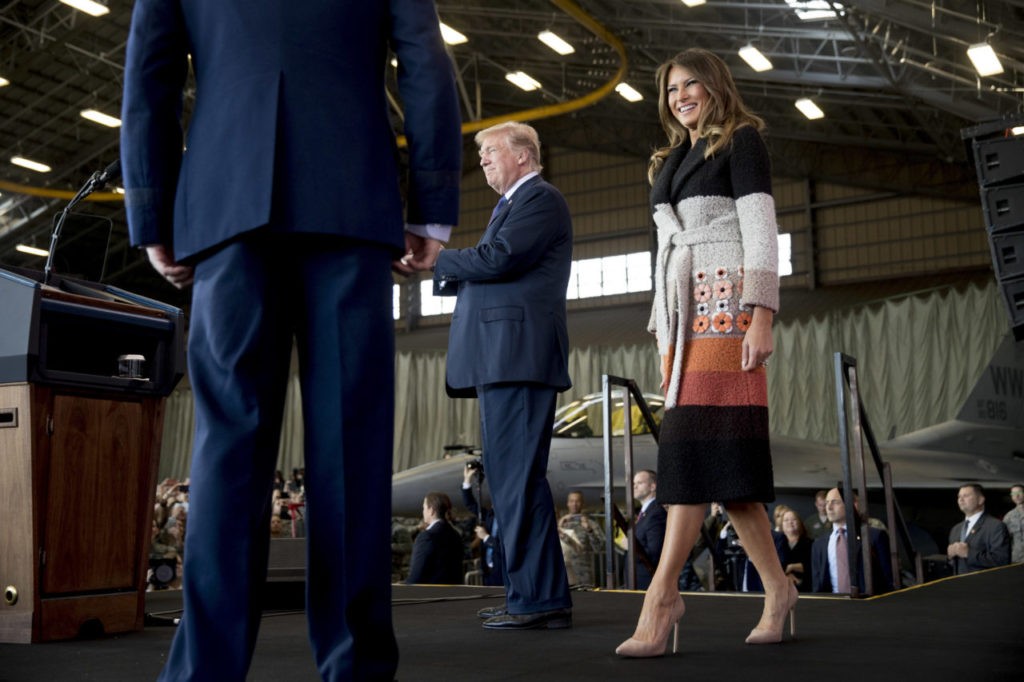 Later in the evening, Melania appeared powerful in a sleek black coat with a high collar and a black satin belt to cinch her waist, an ensemble put together by her stylist, Pierre. Also, Melania shifted hairstyles, choosing a side-part with light waves at the ends. 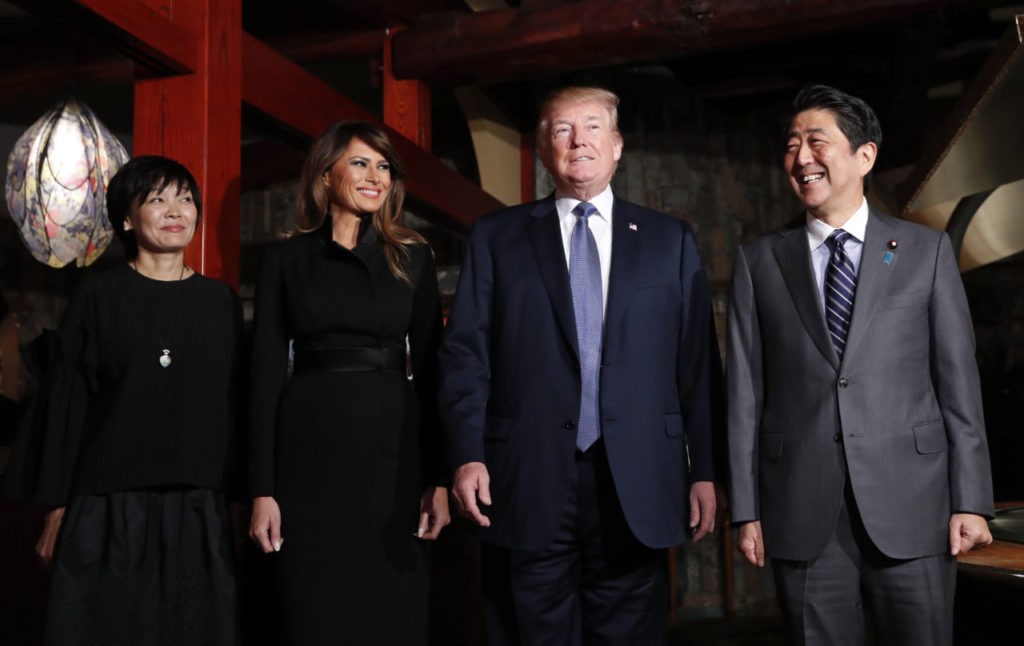 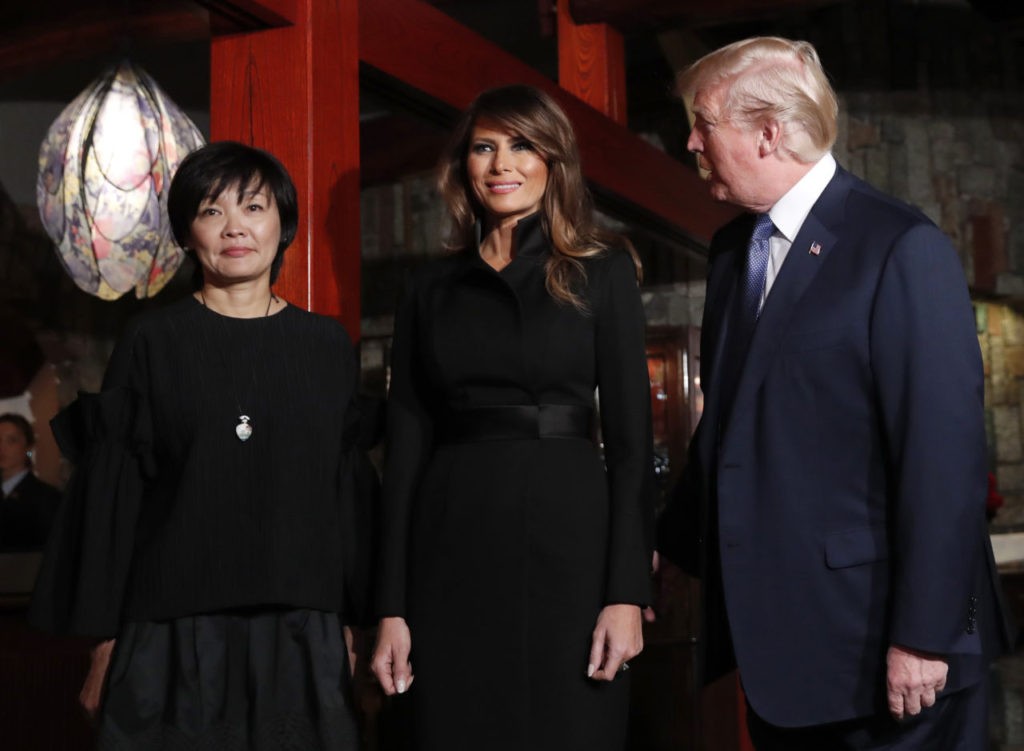 For her departure from Hawaii to Tokyo, Melania chose a whimsical, Honolulu-inspired sleeveless shirt-dress from Borgo de Nor, nude Manolo Blahnik flats, and dark sunglasses to keep her eyes out of the radiating sunlight.

Melania toned down her generally high fashion wardrobe for a serene Christian Dior dress as she arrived with President Trump in Hawaii.

As Melania stepped off Air Force One, she opted for an ivory silk Dior dress that wrapped into a v-neckline, while adding a thin black belt to accentuate her modelesque frame.

The ensemble was topped off with pointed snakeskin stilettos and dark sunglasses that peaked through her windblown hair. 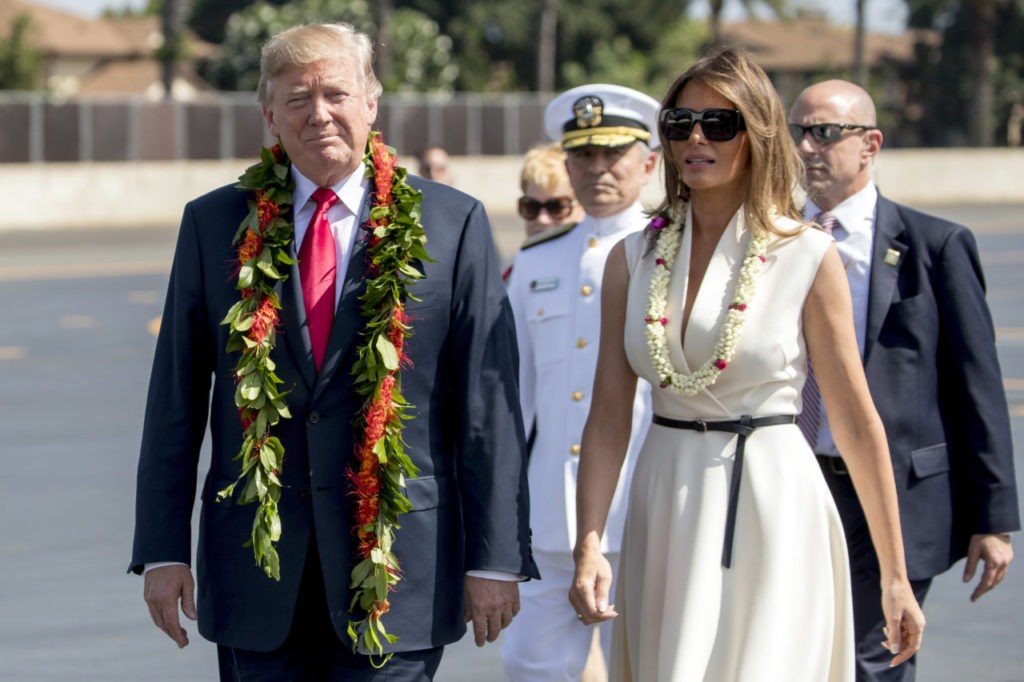 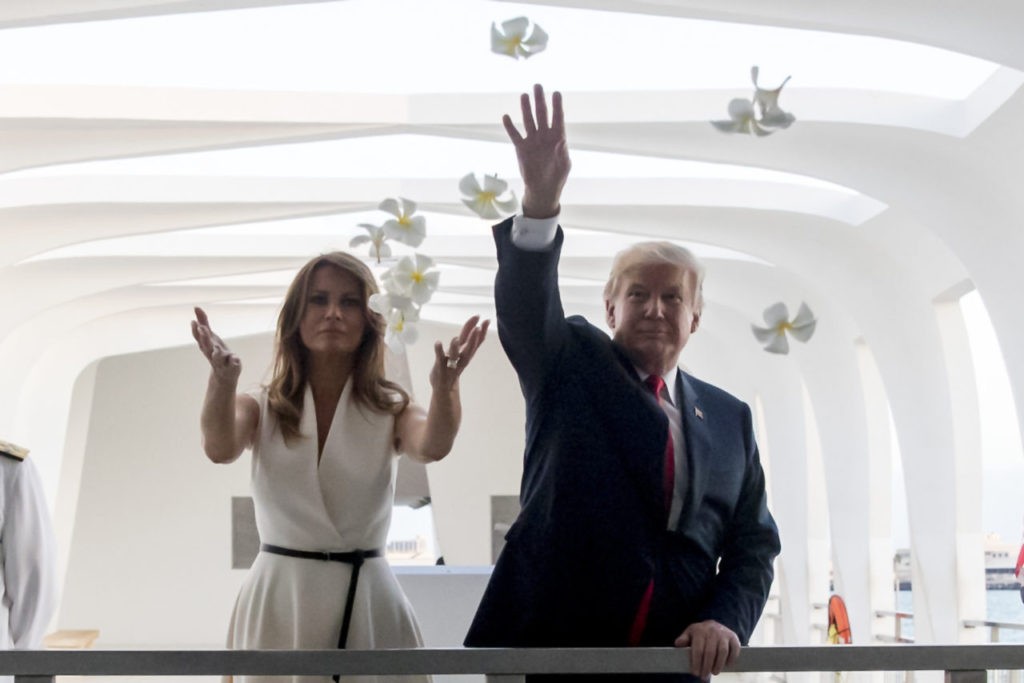 U.S. President Donald Trump and first lady Melania Trump throw flower pedals while visiting the Pearl Harbor Memorial in Honolulu, Hawaii Friday, Nov. 3, 2017. Trump paid a solemn visit Friday to Pearl Harbor and its memorial to the USS Arizona, a hallowed place he said he had read about, discussed and studied but had never visited until just before opening his first official visit to Asia. (AP Photo/Andrew Harnik)

The Slovenian-born former model looked as though she was strutting down the catwalk as she exited the White House in the vibrant, monochromatic ensemble that was finished off with chunky, square black sunglasses. 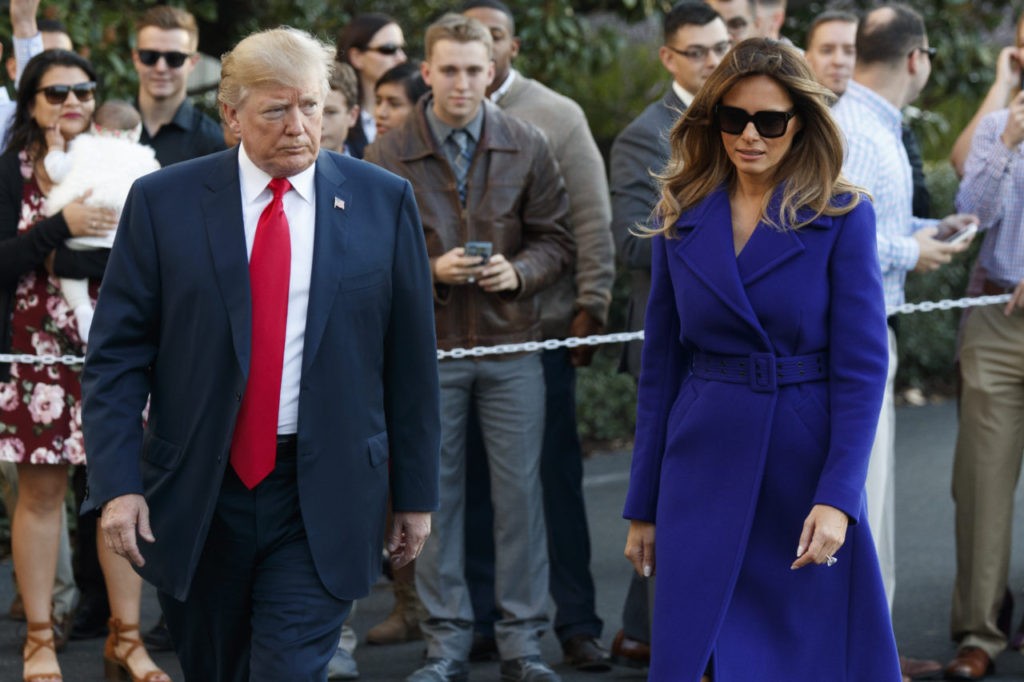 In this Nov. 3, 2017, photo, first lady Melania Trump and President Donald Trump walk to speak with reporters before departing the White House for a trip to Asia in Washington. (AP Photo/Evan Vucci) 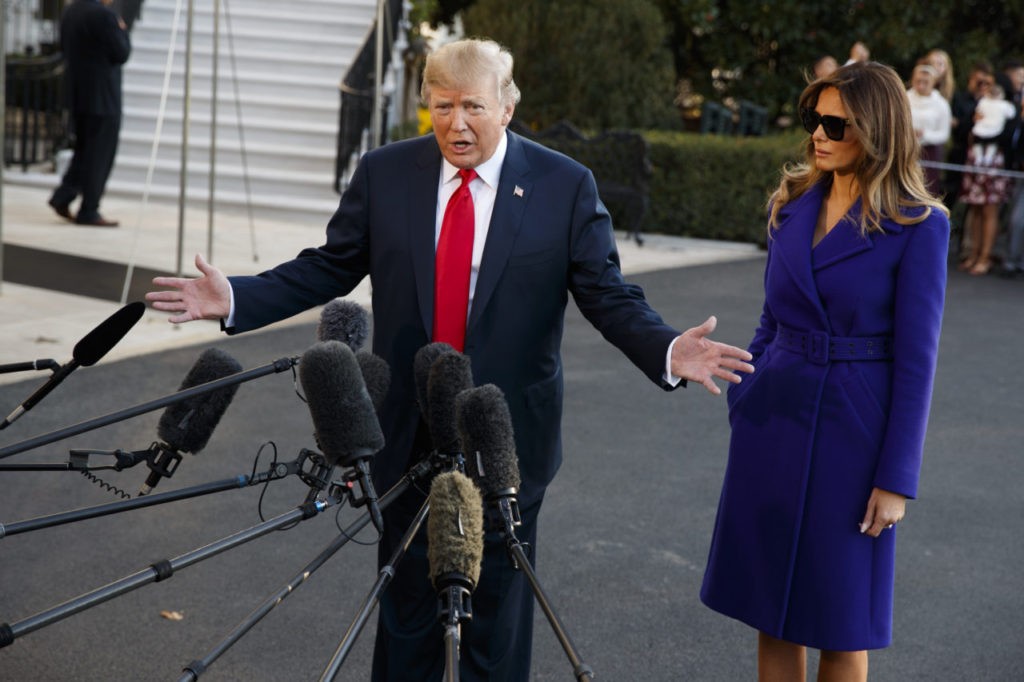 First lady Melania Trump looks on as President Donald Trump speaks with reporters before departing the White House for a trip to Asia, Friday, Nov. 3, 2017, in Washington. (AP Photo/Evan Vucci)