Hollywood star Jennifer Lawrence hit back at feminists who attacked her for wearing a “revealing” dress in cold weather, writing on Facebook Wednesday that she is “extremely offended” and calling her critics “sexist.”

Lawrence came under fire for wearing a Versace dress, which critics described as “revealing,” while posing for a photo with her Red Sparrow co-stars Joel Edgerton, Jeremy Irons, Matthias Schoenaerts, and director Francis Lawrence, who wore winter coats.

Helen Lewis, the deputy editor of the New Statesman, received thousands of likes in her critique of Lawrence’s choice of clothing.

Meanwhile, other social media users, the Daily Mail reports, blamed the photo op on “the film industry’s requirement that women be sexy,” and complained about the men wearing winter clothing but not Lawrence.

Lawrence released a statement on Facebook, calling her critics “sexist” and claiming she was “extremely offended” by their disapproving comments.

“Wow. I don’t really know where to get started on this ‘Jennifer Lawrence wearing a revealing dress in the cold’ controversy. This is not only utterly ridiculous, I am extremely offended,” the Oscar-winning actress wrote. “That Versace dress was fabulous, you think I’m going to cover that gorgeous dress up with a coat and a scarf? I was outside for 5 minutes. I would have stood in the snow for that dress because I love fashion and that was my choice.” 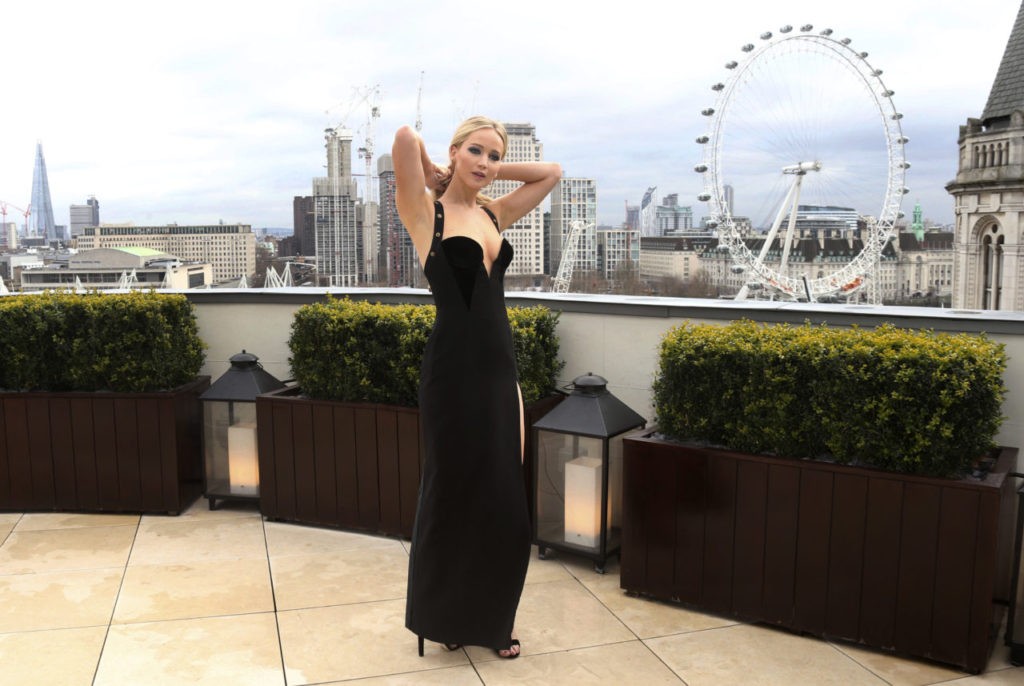 “This is sexist, this is ridiculous, this is not feminism,” Lawrence continued. “Over- reacting about everything someone says or does, creating controversy over silly innocuous things such as what I choose to wear or not wear, is not moving us forward. It’s creating silly distractions from real issues. Get a grip people. Everything you see me wear is my choice. And if I want to be cold THATS MY CHOICE TOO!”

Earlier this week, Lawrence announced she was taking a break from acting so she could help “fix our democracy.”

“I’m going to take the next year off,” she proclaimed. “I’m going to be working with this organization as a part of Represent.US… trying to get young people engaged politically on a local level… It doesn’t have anything to do with partisan [politics]. It’s just anti-corruption and stuff trying to pass state by state laws that can help prevent corruption, fix our democracy.”

In 2015, Lawrence predicted, “If Donald Trump becomes president, that will be the end of the world,” while in August, she expressed further hatred of the president by claiming she would say, “Fuck you,” if she were to ever meet him.

On the first anniversary of President Trump’s inauguration in January, Lawrence attended the Women’s March in New York City.