A record-breaking 18 million viewers tuned into ABC Tuesday night to watch the return of the 1990s queen of sitcom. After a 20-year absence, Barr revived her award-winning role as the matriarch of the working class Conner family of Lanford, Illinois. And Trump’s America found a champion.

After the 2016 election, Hollywood executives realized how ridiculously out of step they were with their audience. If the box office collapse and network television implosion wasn’t proof enough, the election of Donald Trump left no doubt they were clueless about life outside their media bubble.

Hillary’s loss came as a complete shock to them because, to paraphrase Pauline Kael’s infamous (and probably apocryphal) quote about Nixon’s 1972 victory, they didn’t know anyone who voted for Trump.

Well, actually, they did know at least one Trump voter: Roseanne Barr.

For a brief time following the election, Hollywood’s top brass tossed around the idea of  reaching out to Trump’s forgotten men and women with targeted programming. Most of those early conciliatory gestures gave way to pussy hat protests, Russian conspiracies, and mass “un-friend-ings.” The #Resistance furthered the divide.

But one project did break through the political noise, as the entertainment industry turned to an old pro for guidance. 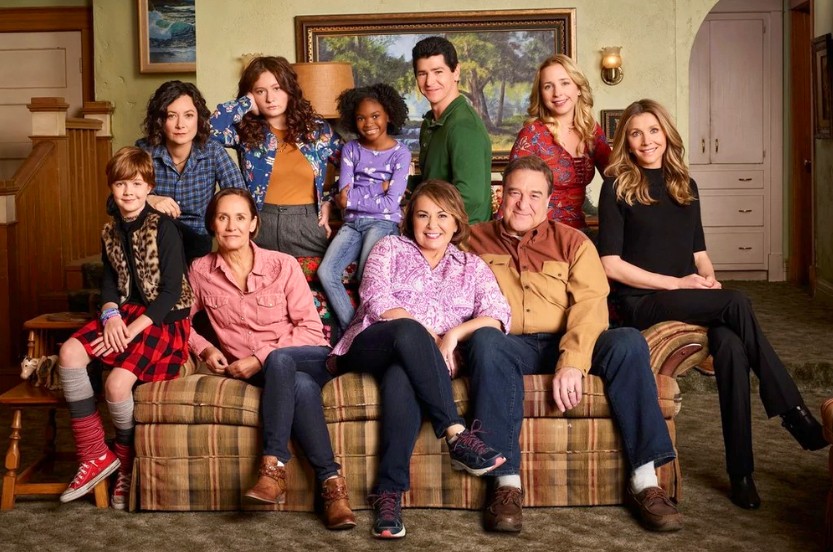 Unlike Hollywood executives and their counterparts on Wall Street and Capitol Hill, Roseanne Barr knew exactly why she and the rest of America voted for Trump. Last night’s Roseanne reboot gave a simple and honest answer to the befuddled studio execs and the finger-wagging #Resistance scolds.

No, Trump’s voters aren’t racist, sexist, xenophobic, self-hating, privileged, or duped by Russians. They are – to quote Barr’s sitcom daughter Becky (Lecy Goranson) – “stressed about money.” As Roseanne explains to her Hillary-supporting sister Jackie, Trump “talked about jobs. He said he’d shake things up. It might come as a complete shock to you, but we almost lost our house because of the way things were going.”

These reasons “might come as a complete shock” to bicoastal elites because the post-NAFTA plight of working class Americans has been ignored for the last 20 years. And perhaps it’s not coincidental that Barr’s sitcom has been absent for those two decades. When Roseanne debuted in 1988, it was rightly described as “groundbreaking” for its un-ironic and unapologetic warts-and-all depiction of a working class American family. Here at last was a non-idealized TV family that actually resembled the country. We’ve never met the Bradys. But we’ve all met families like the Conners. They weren’t airbrushed or sentimentalized or treated with condescension.

Coming from a working class background herself, Barr instinctively understands ordinary Americans and their struggles. “I’ve always attempted to portray a realistic portrait of the American people and of working-class people. And in fact it was working-class people who elected Trump,” Barr said of her series reboot.

The new series begins 20 years after the show’s last episode in 1997. Now Roseanne and her husband, Dan (John Goodman), are grandparents. Their younger daughter, Darlene (played by actress and the show’s executive producer Sara Gilbert), has moved back in with them after being laid off from her job in Chicago. She brings her teenage daughter, Harris (Emma Kenney), and 9-year-old son, Mark (Ames McNamara), with her.

While the economic challenges facing working class America is always near the surface, Roseanne doesn’t shy away from the cultural changes of the last 20 years. It treats these topics humanely without feeling the need to be politically correct. Take, for example, the way Roseanne and Dan discuss their 9-year-old grandson’s gender non-conforming clothing choices.

“May the winds fill his sails and carry him to the boys section of Target,” Dan replies.

Later, Dan asks, “Why is masculinity now a bad thing?”

But while enjoying a laugh at the incongruity of the situation, the show is still able to convey Dan and Roseanne’s love for their grandson without being preachy.

The same is true for the show’s homage to the military. The Conners’ son, DJ (Michael Fishman), has just returned from his Army deployment and is raising his daughter while his wife currently serves overseas. When Roseanne leads the family in prayer before dinner, she asks God’s protection for our troops. That’s not something we’ve heard on network television in a while.

But the focus of Tuesday’s episode was the conflict between Roseanne and her sister Jackie, who have been estranged ever since the 2016 election.

It’s not hard to see what the writers were going for with this interaction. America, like these sitcom sisters, has been hopelessly divided, with each side ascribing the worst motives to the other and refusing to even tolerate a different opinion.

Roseanne attempts to bridge the divide with humor. As Sara Gilbert explained to The Hollywood Reporter, the show addresses politics “in the context of a family.”

“People feel like they can’t disagree and still love and talk to each other,” Gilbert said. “It’s a great opportunity to have a family divided by politics but is still filled with love. What a great thing to bring into this country right now.”

Fittingly, Gilbert’s character is the one who brings her mom and aunt back together to resolve their political differences. Without actually naming Donald Trump (“that crazy man”) or Hillary Clinton (“the worst person on earth”), they have it out and both give as good as they get.

And that is the show’s secret sauce. The rebooted Roseanne is not a right-wing show or a left-wing show – it’s an American show. Everyone will get a laugh from it.

Take, for example, the dialogue after Roseanne says she voted for Trump because he would improve the economy.

“Have you looked at the news? Because now things are worse!” Jackie shouts back.

Both sides of the political divide can laugh at that. Barr’s fellow Deplorables will laugh at the “fake news” jab. The #Resistance will roll their eyes and laugh at the perceived foolishness of Trump voters.

Roseanne and Jackie eventually argue to a stalemate and hug it out.

“I should have tried to understand why you voted the crazy way you did,” Jackie says.

“And I should have understood that you wanted the government to give everybody free health care because you’re a good-hearted person who can’t do simple math,” Roseanne replies.

And with that, the Deplorables were finally given a fair shake by network television, instead of being sneered at by the likes of Will & Grace or tossed occasional breadcrumbs by SNL.

The new Roseanne, like the old Roseanne, celebrates the humor, common sense, and decency of working class Americans. After 20 years, Trump’s America was happy to see the Conners again.