NORRISTOWN, Pa. (AP) — A topless protester with “Women’s Lives Matter” written on her body jumped a barricade and got within a few feet of Bill Cosby on Monday as the comedian walked into a suburban Philadelphia courthouse for the start of his sexual assault retrial.

The unidentified woman ran in front of Cosby toward a bank of TV cameras but was intercepted by sheriff’s deputies and led away in handcuffs.

Cosby seemed startled by the commotion as a half-dozen protesters chanted at him.

The disruption came ahead of opening statements Monday, though a delay was expected while the judge sorted through allegations raised late Friday that a juror was overheard saying he thought Cosby was guilty. Cosby’s lawyers asked that the man be questioned and removed from the case.

Prosecutors have lined up a parade of accusers to make the case that the man revered as “America’s Dad” lived a double life as one of Hollywood’s biggest predators. 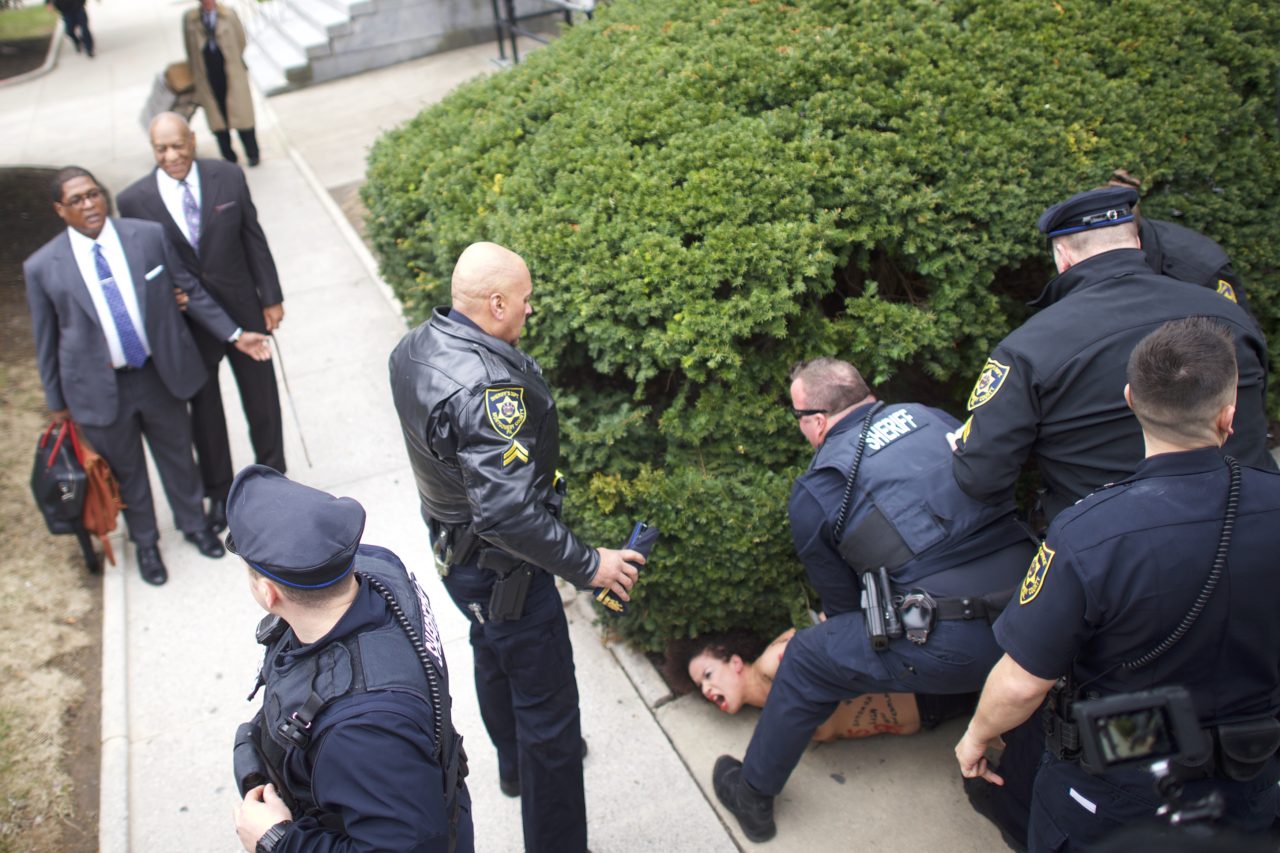 Bill Cosby (L) arrives as a topless protestor wearing body paint is arrested by police officers at the Montgomery County Courthouse for the first day of his sexual assault retrial on April 9, 2018 in Norristown, Pennsylvania. A former Temple University employee alleges that the entertainer drugged and molested her in 2004 at his home in suburban Philadelphia. More than 40 women have accused the 80 year old entertainer of sexual assault. (Mark Makela/Getty Images)

He is fighting back with a new, high-profile lawyer and an aggressive strategy: attacking Andrea Constand as a greedy liar and casting the other women testifying as bandwagon accusers looking for a share of the spotlight.

Cosby’s first trial last spring ended in a cliffhanger, with jurors unable to reach a unanimous verdict after five days of tense deliberations on charges that the man who made millions of viewers laugh as wise and understanding Dr. Cliff Huxtable on “The Cosby Show” drugged and molested Constand at his suburban Philadelphia home in 2004.

The 80-year-old comedian, who has said the sexual contact was consensual, faces three counts of aggravated indecent assault, each punishable by up to 10 years in prison.

Nearly every potential juror questioned for the case this time knew about #MeToo.

Kristen Houser of the National Sexual Violence Resource Center said that could help prosecutors overcome the skepticism some jurors had last time about Constand’s yearlong wait to report her allegations to the police.

“The #MeToo movement is amplifying what experts have been saying for decades: People are ashamed, they’re confused, they can’t believe somebody they trust would hurt them, and then they worry that others won’t believe them,” Houser said.

After limiting the focus of the first trial, Judge Steven O’Neill has been willing to let both sides push the retrial well beyond Constand’s allegations.

This time, O’Neill is letting prosecutors have five additional accusers testify — including model Janice Dickinson — as they attempt to show Cosby made a habit of drugging and violating women. The judge allowed just one other accuser to take the stand last time.

“This one will be harder for the defense,” Levenson said. This time, Constand “is not alone, and there is strength in numbers.”

In another difference, the judge this time is letting Cosby’s legal team call as a witness a former co-worker of Constand’s at Temple University who said Constand spoke of setting up a “high-profile person” so she could sue and enjoy a big payday. Constand’s lawyer has said the co-worker is lying.

The judge also decided the jury can hear the answer to one of the biggest questions hanging over the case: How much did Cosby pay Constand to settle her lawsuit against him more than a decade ago? The two sides agreed at the first trial not to mention the lawsuit.

In a twist, the judge hinted that he might not allow jurors to hear Cosby’s lurid deposition testimony about giving quaaludes to women before sex. He said he would rule on it during the trial. Cosby testified in 2005 and 2006 as part of Constand’s lawsuit.

The Associated Press does not typically identify people who say they are victims of sexual assault unless they grant permission, which Constand and Dickinson have done.